Accessibility links
Judge Intervenes After N.Y. Police Clear Occupy Camp : The Two-Way The judge issued a temporary restraining order allowing protesters to return to New York City's Zuccotti Park ahead of a hearing later this morning. Mayor Michael Bloomberg had said in a statement that protesters would be allowed to return once the park was cleaned — but that they would not be permitted to set up a camp. 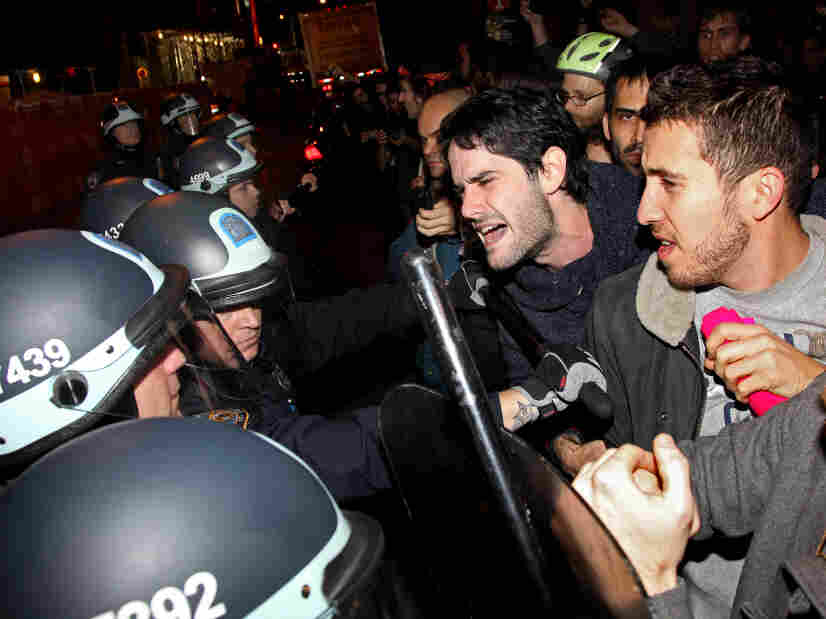 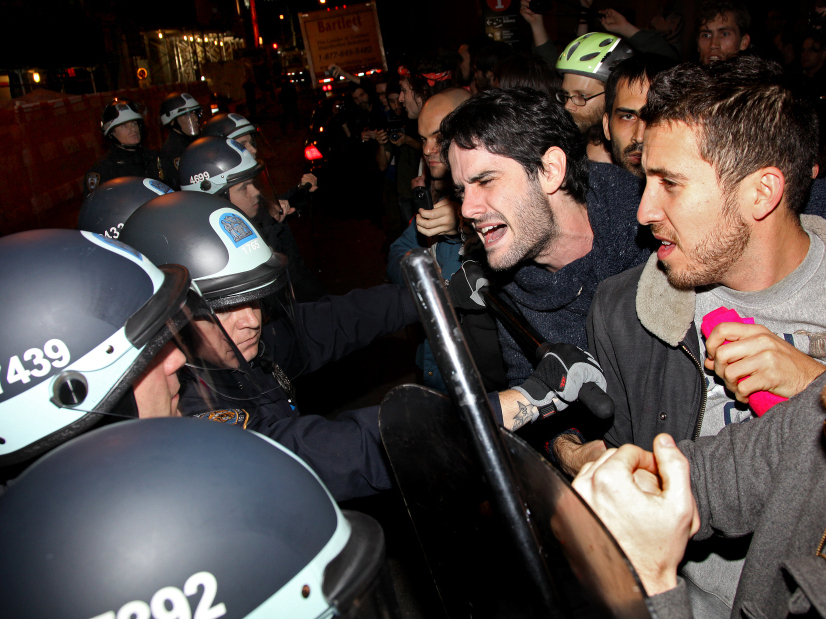 Saying that "the occupation was coming to pose a health and fire safety hazard to the protesters and to the surrounding community," New York City Mayor Michael Bloomberg ordered the clearing of Zuccotti Park early today.

The privately owned park has been the nerve center of the Occupy movement — a loosely organized collection of people who are angry about the wide wealth, income and power gaps between America's richest 1 percent and everyone else. Over recent months, Occupy has spread to other cities across the nation and to some foreign capitals. The move by New York officials follows similar actions in other cities, including Portland, Ore., and Oakland, Calif., over the weekend.

Starting around 1 a.m. ET, police cleared the area in lower Manhattan so that sanitation crews could begin a cleanup of the site, where for about two months Occupy Wall Street protesters have been camped and which had become filled with tents, tarps and sleeping bags. The NY1 news channel says an estimated 200 protesters were in the park at the time. There have been at least 70 arrests so far, but many protesters appeared to leave peacefully. (Update at 8:40 a.m. ET: Bloomberg just told reporters that about 200 arrests were made.)

According to The New York Times, before entering the area hundreds of police officers in riot gear "ringed the park and set up bright klieg lights, and protesters emerged bewildered out of their tents." An ultimatum was issued: Leave or face arrest. "Some protesters grabbed valuables and slipped away," the Times says. "But others — about 100 — resisted. They contracted into their own tight ring in the center of the park and locked elbows. Some even scrounged for thick bicycle locks and chained themselves together."

As police officers moved through the park, they cut tents and tarps down. Sanitation trucks took much of the material away. Protesters were told where they could go to retrieve any belongings left behind.

And, according to Bloomberg's statement, protesters were also told they can return to the site — but that they wouldn't be allowed to set up a camp again.

"No right is absolute and with every right comes responsibilities," the mayor's statement reads. "The First Amendment gives every New Yorker the right to speak out — but it does not give anyone the right to sleep in a park or otherwise take it over to the exclusion of others — nor does it permit anyone in our society to live outside the law. There is no ambiguity in the law here — the First Amendment protects speech — it does not protect the use of tents and sleeping bags to take over a public space."

But, Bloomberg added, the park was becoming "a health and fire safety hazard to the protesters and to the surrounding community. ... [And] I could not wait for someone in the park to get killed or to injure another first responder before acting."

Before this morning's move to clear the park, protesters had been planning a Thursday push to "shut down Wall Street," as New York's Daily News reports.

"It's still on. It'll be bigger than ever. People are mobilizing now. They're wounded now and preparing for comeback," protester Matt Baldwin told the Daily News.

At one Occupy Wall Street website, there's the vow that "we will reoccupy!" And there's a call for a 9 a.m. ET rally at Canal and 6th Avenue in Manhattan.

Freelance journalist Julie Walker, who was at the scene reporting for NPR, was swept up with some of those who were arrested. She just told our Newscast desk that it appears some of the protesters are already gathering for that rally.

"Police just drove off with bus of arrested protesters here at #OWS at 6th & Grand," Times columnist Nick Kristof just reported on his Twitter page. "Arrests here seem over. No violence that I saw."

After some protesters cut a lock to get into the grounds of Trinity Church in lower Manhattan, others "flooded in," the Times' City Room blog reports. Just this hour, it added, "police came in and cleared them out, arresting about two dozen people. At least four journalists, including a reporter and a photographer from The Associated Press, a reporter from The Daily News and a photographer from DNAInfo, were led out in plastic handcuffs."

At a news conference that's now under way, Bloomberg just said that the park is ready to be reopened — but will remain closed for now because of the court order we posted about at 8:20 a.m. ET (a judge said authorities could not prevent protesters from returning with tents and other possessions).

The park, Bloomberg said, "will remain closed until we can clarify that [legal] situation."

The Times' City Room blog reports that a judge in New York has "issued a temporary restraining order allowing protesters to return to Zuccotti Park." It adds that there's a court hearing set for 11:30 a.m. ET. In the meantime, the judge's order says authorities may not evict protesters or "otherwise [prevent] protesters from re-entering the park with tents and other property previously utilized." So stay tuned.