Accessibility links
Rep. Giffords: 'I Want To Get Back To Work' : The Two-Way In a message to her constituents, the congresswoman says "representing Arizona is my honor." Her husband tells NPR "it's very possible" she will run for reelection next year. Giffords is recovering from being shot in January.

Rep. Giffords: 'I Want To Get Back To Work'

Rep. Giffords: 'I Want To Get Back To Work' 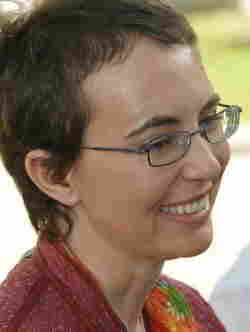 From a conversation later today on All Things Considered with her husband Mark Kelly, to last night's interview with the couple on ABC-TV to an audio message for her constituents, there are several things to pass along this morning about Rep. Gabrielle Giffords (D-Ariz.) and the recovery she's making from being shot in the head last January.

-- The Arizona Daily Star had the scoop on the audio message last night. It's Giffords' first such recording since the Jan. 8 shooting rampage in Tucson that left 6 people dead and 13, including Giffords, wounded. Giffords, who has been spending most of her time in recent months in Houston where she's getting rehabilitation therapy, says in part:

"I want to get back to work. Representing Arizona is my honor."

As the newspaper says, she speaks "in a slow but clear voice." The statement lasts about one minute. It is an edited recording.

Giffords' staff has since posted the message here.

-- In his conversation with All Things Considered host Melissa Block, Kelly says "it's very possible" that the 41-year-old Giffords will run for reelection in 2012.

He also talks about what it was like the first time, about six months after the shooting, that she was able to ask a question.

It was a simple one, to Kelly: How was his day? "It was a big event. It was so big to me, [that it] completely, like, locked my brain up," he says. "So she had this momentous event when she finally asks a question and I had no answer [because] I was so happy about it."

Much more from the conversation is due on today's All Things Considered. That report will also include Giffords reading from the book that she and Kelly just released: Gabby: A Story of Courage and Hope. Click here to find an NPR station that broadcasts or streams the show. Later today, the as-broadcast audio and a story about the interview will be posted here.

-- ABC-TV, which began releasing parts of its interview with Giffords and Kelly last week, said during its full report last night that "humor and determination" have been key to Giffords' recovery.

Asked what she wants more than anything at this point, Giffords tells ABC's Diane Sawyer: "Better. Better. Working hard."