Accessibility links
Police Use Barricades To Control N.Y. Occupy Crowd : The Two-Way Small pockets of protesters are still milling about intersections all around lower Manhattan, but police have kept them from disrupting traffic any further. 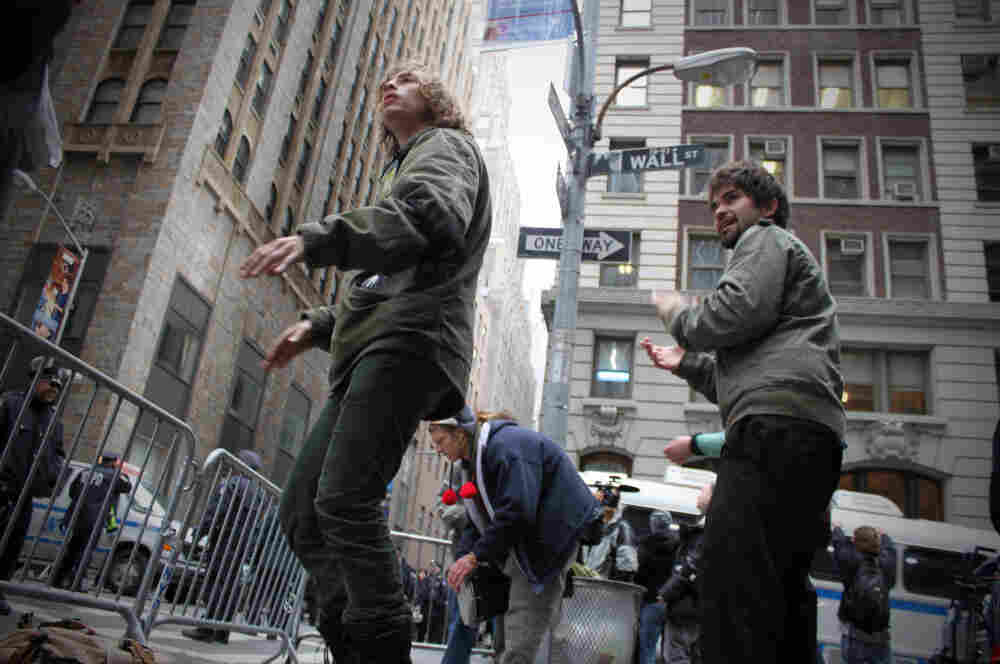 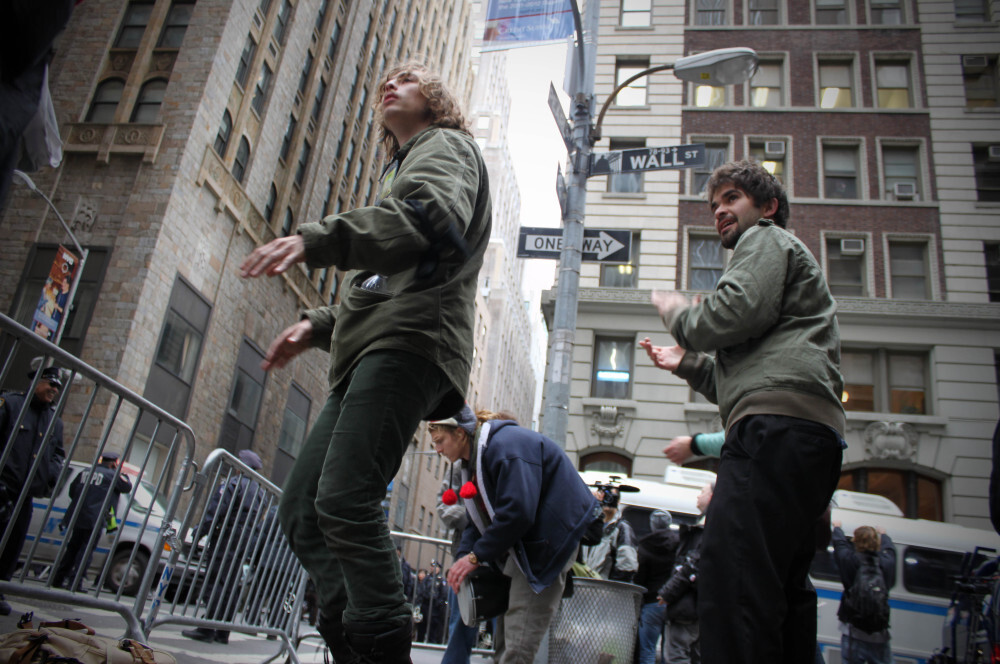 A couple of protesters dance on Wall St.

I took a walk up and down the main arteries into Wall Street and things seem to be settling down. As the protesters dispersed this morning, they made the decision to leave large groups of people at different intersections in New York's Financial District.

What police have done to control the crowds is block access to certain blocks and they've also barricaded protesters in sidewalks. So what you have now is a fractured protest with, for example, 30 protesters at one intersection and 15 at another.

By far the biggest gathering I've seen is at the intersection of Pine and Nassau, where Wall Street workers have been walking through a tunnel of two rows of police officers. And every time a group of them walked by, the crowd started chanting.

"Whose street? Our street!"

It felt very much like workers crossing a picket line. Most of the workers kept their heads down, but a few stopped to talk to protesters, who tried to convince them to go home or "join their movement."

Nathan Storey, 29, was one of the protesters there. He was telling a couple of Wall Street workers that the sidewalks were occupied and that they had to turn around and be escorted by police if they wanted to get through.

One of the workers looked at him and said, "I'm not part of the 1 percent."

Storey said the Occupy Movement has already achieved its goal: People are talking about income inequality, he said, and "it's the first time that's happened in my entire life."

Although, he talked about those big ideas. Storey was also at the protest for very personal reasons. He said he took on a bunch of student-loan debt when he was young and "didn't know any better" and in November of 2008 he was laid off from his work at a non-profit. With a degree in film and TV, he said he hasn't been able to find work ever since. His only alternative was to go to graduate school for a degree in urban planning, work four jobs to survive and still take on more debt.

At the intersection of Wall Street and Pearl, a small group of people gathered with a set of drums. One police officer whispered into one of the drummer's ears, "We like the beat."

A couple of women were dancing and every once in a while someone from one of the buildings towering above would come out to take in the scene.

One man, who declined to give his name, but said he has worked on Wall Street for nine years, just shook his head. He was wearing a grey wool coat and his hair was neat and combed back. He stood at that corner for a while.

"This is ridiculous," he said. "I just don't understand why they're not out trying to find jobs."

He said he works 75 to 80 hours a week, so he deserves to be part of the one percent. He says he chose a degree in finance so he could make a lot of money.

I told him what Nathan Storey had told me. He was laid off in 2008 and still couldn't find a job.

The man shook his head.

"He could get jobs at McDonald's," he said. He conceded however that minimum wage isn't much money and he said he was willing to pay more taxes.

But he said he truly believes if you want to make money in this country, you can work hard and do that.

"This is the land of opportunity," he said.

We're sticking with coverage of the protests for the rest of the day. Just to give you an idea of what to expect, here's what Occupy Wall Street has planned:

-- At 3 p.m. ET. protesters say they will gather at 16 subway locations across the city. We will be at Union Square, where "mass student strike" is planned.

-- At 5 p.m. ET. protesters will join unions for a rally in front of City Hall. Protesters plan on marching to the Brooklyn Bridge.