Accessibility links
Occupy Wall Street: A Lesson On An 'Organic Movement' : The Two-Way The Occupy Movement is purposely fractured and protesters take pride in the kind of decentralized governance they have created.

Occupy Wall Street: A Lesson On An 'Organic Movement'

Occupy Wall Street: A Lesson On An 'Organic Movement' 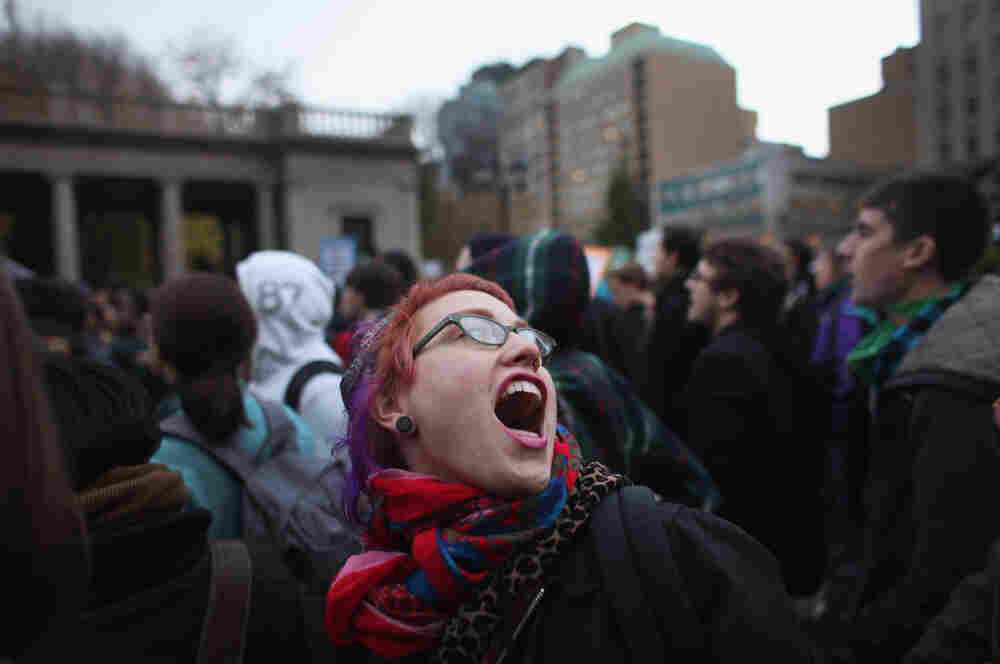 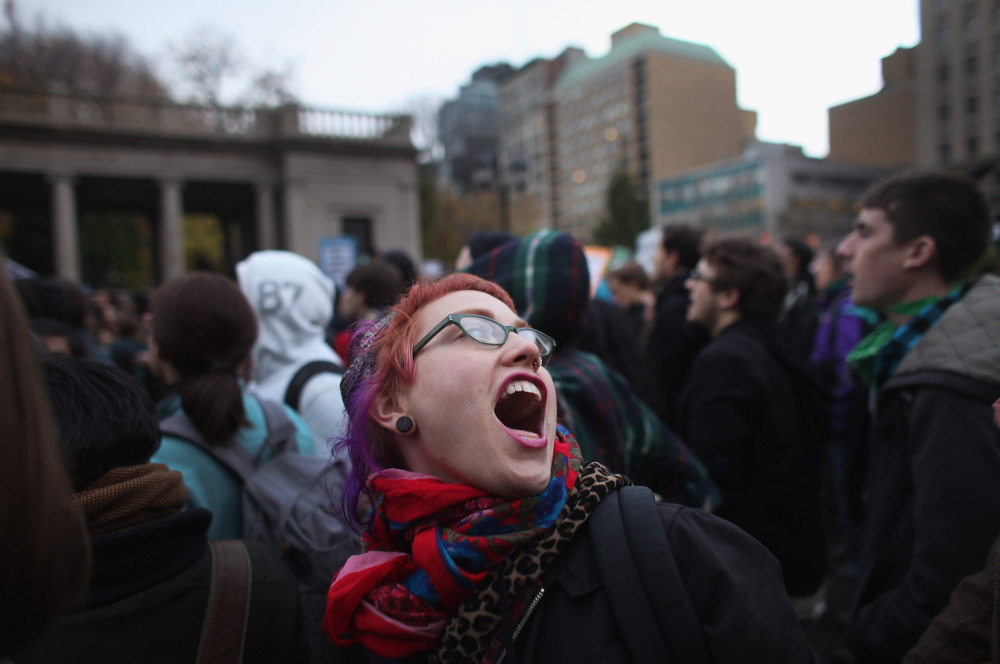 A large gathering of protesters affiliated with the Occupy Wall Street Movement attend a rally in Union Square in New York City.

When you ask a lot of the Occupiers questions about their ideal government, they tell you then want an "organic" government or a "true democracy." Something a lot like what they created at Zuccotti Park, they say.

That's probably why there's been so much press coverage about the confusion of the movement's message. But, walking around and talking to many of the protesters today, it's obvious that it's a movement that has brought together a lot of people with very different ideologies.

Just a couple a couple of examples: Greg Packer, 47, said he was at Occupy Wall Street to protest against what he said were foreigners taking good jobs. While Debbie Williams, 50, said what brought her to the protest were her kids. She had a list of demands on a poster board, among them a demand for good jobs and free college tuition.

There was one moment at Zuccotti Park that really exemplified the loose nature of the movement.

Some time mid-afternoon, tensions between protesters and police boiled over. Police jumped the barricades and filled the park with a huge presence and went in to arrest one of the protesters. The park erupted; the drums got louder, the chants more urgent.

One protester, a blond guy who must have been in early 30s, screamed, "Mic check."

That's a request for help in amplification from the other protesters.

"What are we doing here," he said. "Are we gonna let them run over us? We own this park!"

Now, something really interesting happens when protesters use this "people's mic" method. The words seem immensely important, because they're echoed over and over by other protesters and they become syncopated with the pauses becoming a kind of chant. So as protesters speak, you can feel the crowd getting riled up.

"We own this park," the protester said, and the rest of the crowd repeated. "I want you to push the gates, and run into the streets."

The crowd started repeating what he said, until they realized what he was proposing was an all-out revolt against police. That's the danger, and surely the Occupiers would argue the beauty, of the "people's mic" — that it's available to anyone in the crowd. 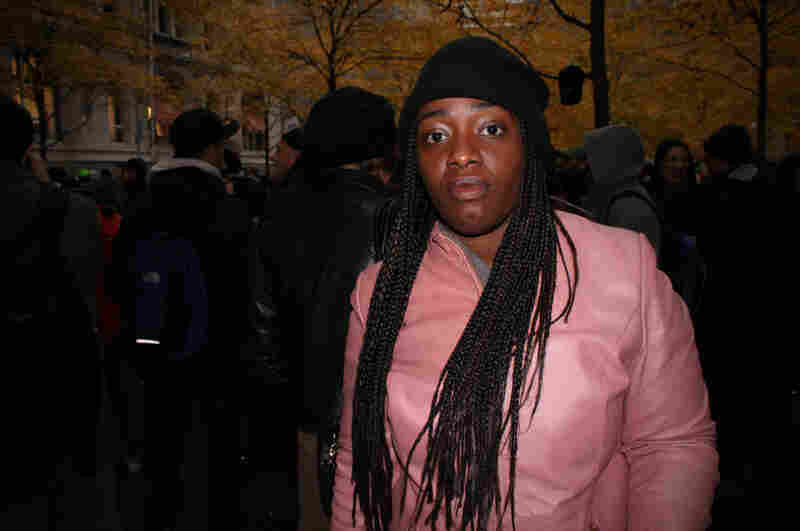 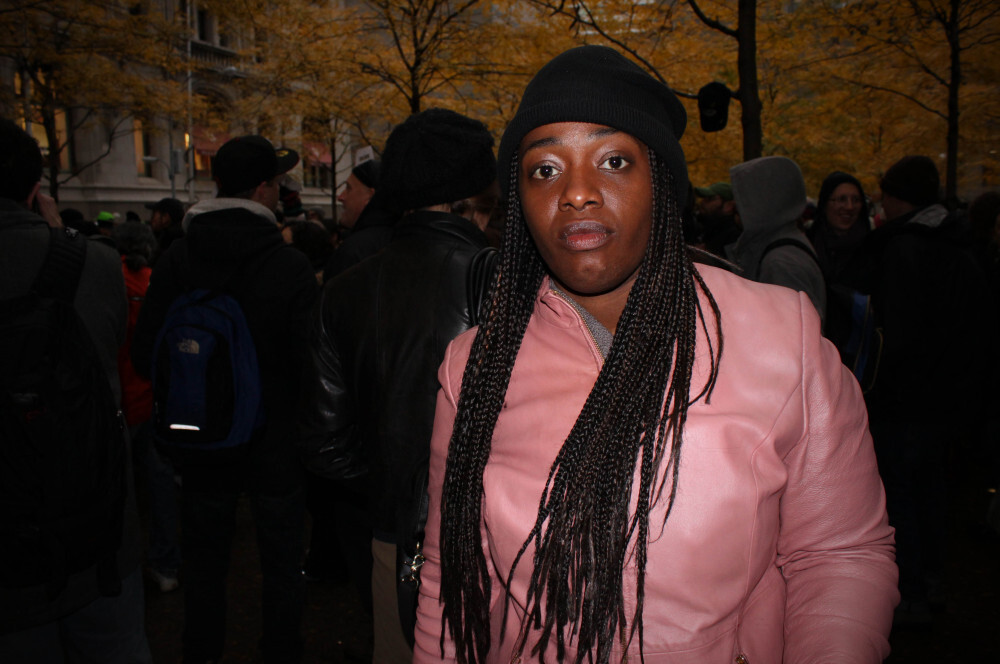 But just like that 29-year-old Lady Millard, screamed, "Mic check!"

"We need to stay peaceful," she said. "We need to remain peaceful. The police are our friends. They do not want to hurt us."

The crowd threw up their fingers in a show of approval. The tension was broken and the protesters marched out of the Park, north on Broadway. Choosing their own direction, some of them headed toward Foley Square; others decided to go toward the Brooklyn Bridge. Another batch kept marching through lower Manhattan, crossing China Town all the way to Union Square, where they assembled under an evening sun and under the watch of the midtown Manhattan skyscrapers.