Accessibility links
As Day Of Action Ends, What Next For Occupy? : The Two-Way Occupy protesters coordinated rallies in several cities across the U.S. As a dramatic week came to a close for the protesters some said the movement was ready for a new phase.

As The Protest Ends, What Now For Occupy Movement?

As The Protest Ends, What Now For Occupy Movement? 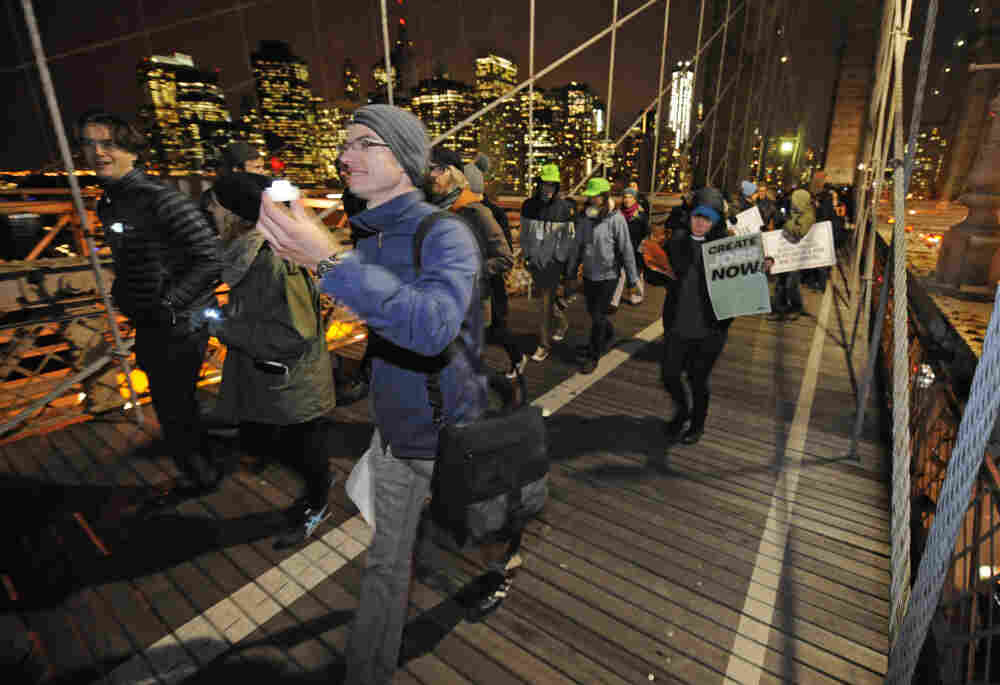 Occupy Wall Street protesters walk across the Brooklyn Bridge. Progressive groups staged similar bridge marches in several cities in an event that was planned weeks ago, but happened to coincide with rallies marking two months since the start of the Occupy movement. Henry Ray Abrams /AP hide caption 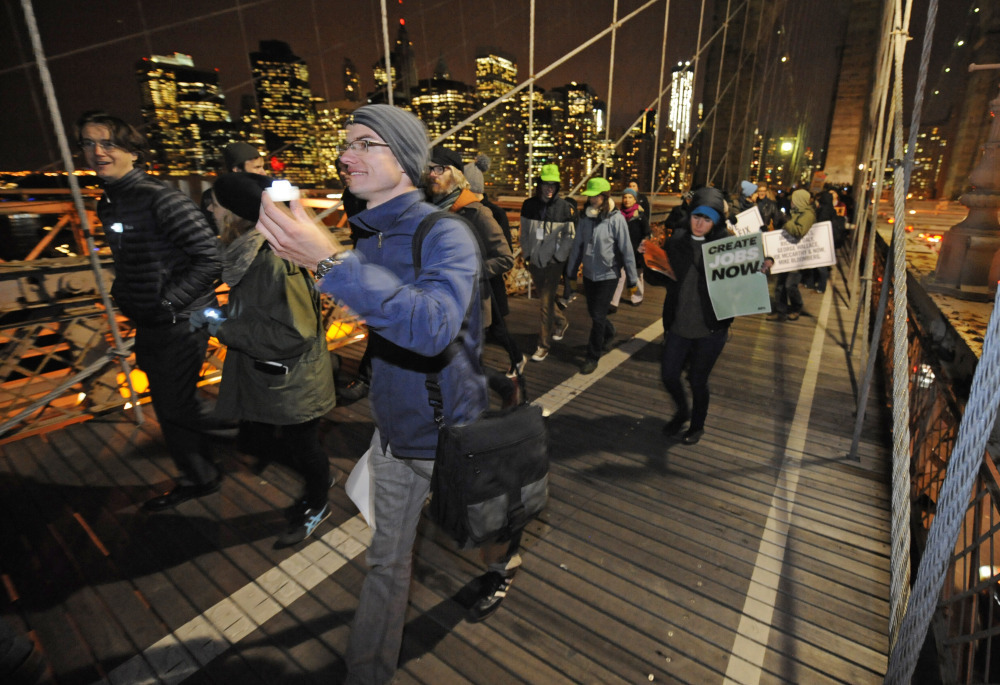 Occupy Wall Street protesters walk across the Brooklyn Bridge. Progressive groups staged similar bridge marches in several cities in an event that was planned weeks ago, but happened to coincide with rallies marking two months since the start of the Occupy movement.

Today's "Day of Action," planned by the Occupy Wall Street movement, culminated at Foley Square near City Hall in New York. In some ways, it felt rather low key, because the space felt wide open and despite a sizable crowd that overflowed onto the streets and nearby sidewalks, the protest felt organized. That certainly wasn't the case for the earlier events: It was an expansive day that started with a chaotic and contested march to block the main arteries of Wall Street and wound its away across the streets and sidewalks of lower Manhattan to the edge of New York University three miles north.

The gathering at Foley Square also marked the end of a dramatic week, which opened on Tuesday with a predawn raid in which New York Police and sanitation workers tore down the tent city the protesters had built at Zuccotti Park.

By the time the protesters made it to the square, the sun had set, and the coalition of organized labor that planned to join them had set up a stage and given out posters, and their members had come out in droves.

Judy Holmes, 58, a Communications Workers Of America union member, was among them. When she saw the droves of young people with their drums and their posters and their chants, she said she thought, "What took them so long?"

She said the last time she was at a protest this expansive, it was over the Vietnam War.

But the some of the union leaders co-opted the Occupiers' language — the "we are the 99 percent" and the at-attention "mic check."

Wendy Henry, 49, who had been a part of the Occupy group for a month stood at the edges of the rally. She was watching the array of ages in the crowd and thinking about how at that instant Occupy had become part of the bigger protest movement in the U.S.

Two months ago, she said, it was just a few people at a park with an idea. And now, there was a stage, there were banners, organized labor was embracing their ideas and a slow, sanctioned march toward the Brooklyn Bridge had begun.

"That happens as things progress," she said. "As grass rooters lead the way, it gets more mainstream.

I asked her what it is the group wants and what happens after this march. Those are two questions that Occupiers have grown averse to and really don't like answering. On more than one occasion today, protesters said it was too complicated to explain.

One protester, a college student named Ben Schultz-Figueroa said about the group's future, "I don't think we have to know."

But Henry took a shot.

"It's about redesigning our society and at some point the politicians will get involved," she said, adding that the fact the rally drew so many people on a cold, rainy night was proof of commitment to the cause.

Henry is an acupuncturist. That's what she did for the protesters at Zuccotti Park. She says she remembers one day a woman came in to the medical tent with a load full of problems.

"She thought she was alone in that she wanted a better world," said Henry. "And now she's able to articulate that with people who feel the same way."

That shift is success, said Henry, and maybe the dismantling of Zuccotti and the empowering of that woman and this hand-holding with organized labor means that the Occupy movement is "ready for a new phase."