Accessibility links
Reports Of Violence Amid Black Friday Frenzy : The Two-Way Shoppers flooded stores across the country as the holiday shopping season officially got under way and people rushed to grab deals on electronics, toys and other merchandise. But retailers' big day was marred by reports of attempted robbery, fighting, and of a woman who allegedly pepper sprayed other customers. 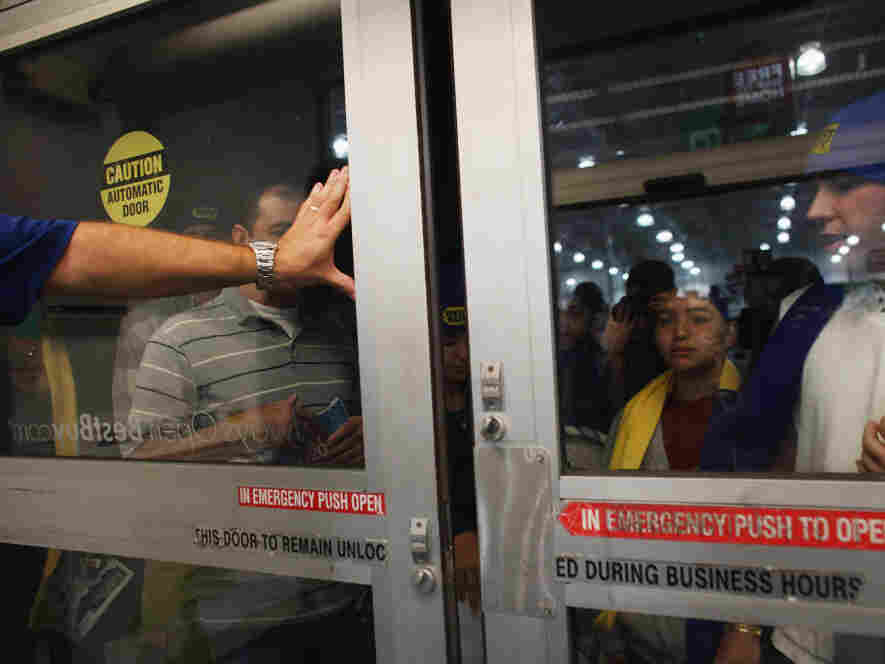 Shoppers wait to get inside of a Best Buy store on Nov. 25 in Naples, Fla. Spencer Platt/Getty Images hide caption 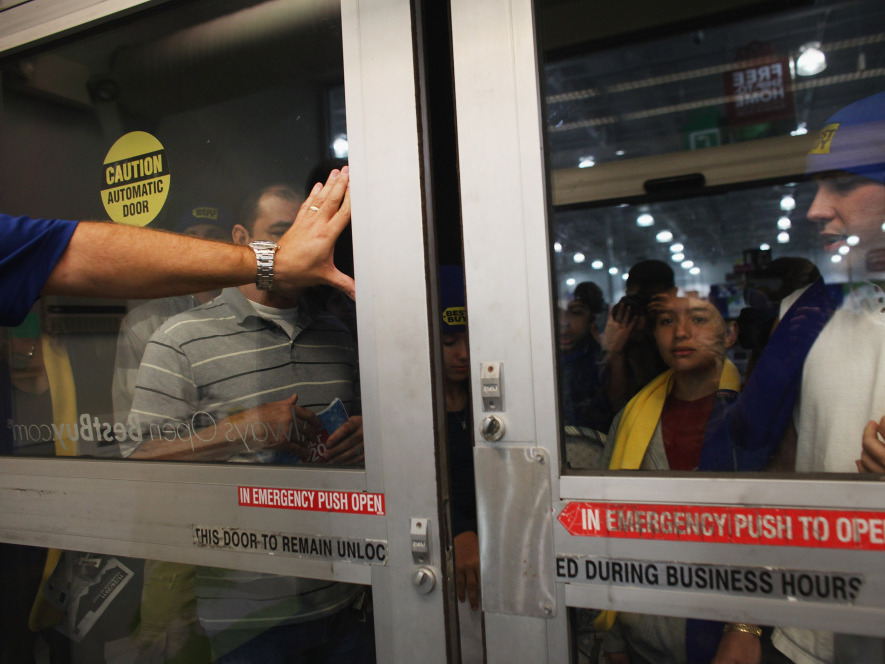 Shoppers wait to get inside of a Best Buy store on Nov. 25 in Naples, Fla.

Shoppers flooded stores across the country today as the holiday shopping season officially got under way and people rushed to grab Black Friday deals on electronics, toys and other merchandise.

More than 9,000 people waited outside Macy's Herald Square in New York City on Thursday night ahead of the midnight opening, according to The Associated Press. A Best Buy in St. Petersburg, Fla., had a line nearly 2,000 shoppers deep.

At the Mall of America in Minnesota, The New York Times reports that an estimated 15,000 people were outside stores by midnight Thursday, and the mall was expecting to exceed last year's total of 200,000 Black Friday shoppers.

There also have been isolated reports of violence at stores across the country.

The disturbing incidents call to mind what happened at a Wal-Mart in Valley Stream, N.Y., in 2008, when a Wal-Mart employee was trampled to death as more than 2,000 people stampeded through the store's locked doors just minutes ahead of the 5 a.m. opening.

Wal-Mart spokesman Greg Rossiter tells the AP that while there were "a few unfortunate incidents" this year, Black Friday went off without a hitch at most of the retailer's nearly 4,000 U.S. stores.

And the vast majority of crowds and lines elsewhere were peaceful. Up to 152 million people were expected to shop the Black Friday sales this weekend either in stores or online. That's up from 138 million people last year, says the National Retail Federation, which is tracking shoppers' behavior.

NPR's Yuki Noguchi spoke with the manager of a Target in Gaithersburg, Md., who says the first person got to the store at 2 p.m. on Thursday, 10 hours ahead of the midnight Friday opening time.

At the Toys "R" Us in New York City's Times Square, Alex Rabinovic says he stood in line for hours on Thanksgiving night to try to save a few bucks on presents for his daughter.

"Eh, it's the American tradition, standing in line in the cold," he tells NPR's Noguchi.

Members of the Occupy movement also were demonstrating in cities across the country, protesting against consumerism and, in some cases, in support of store employees forced to work during the holiday weekend.