Accessibility links
'We Do Not Tolerate Abuse,' Syracuse Chancellor Says : The Two-Way Bernie Fine had been an assistant basketball coach for more than 35 seasons. He has said he's innocent of allegations that he molested young boys.

'We Do Not Tolerate Abuse,' Syracuse Chancellor Says As She Fires Coach

'We Do Not Tolerate Abuse,' Syracuse Chancellor Says As She Fires Coach

ESPN, on its Outside the Lines program, "reported that Fine's wife, Laurie, admitted in a tape-recorded 2002 telephone conversation that she had worries that her husband had sexually molested team ball boy Bobby Davis in their home, but said she felt powerless to stop the alleged abuse." Davis, now 39, and an older stepbrother have alleged that Fine molested them when they were ball boys with the team in the 1980s. 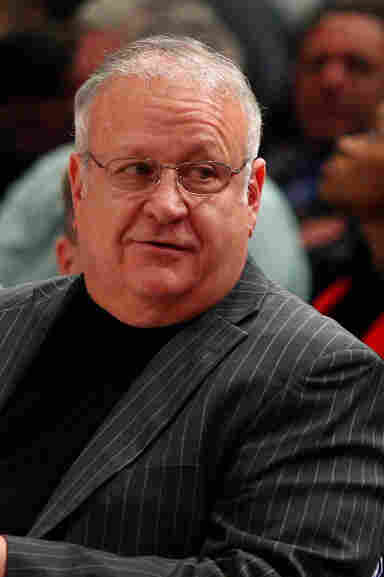 A third man came forward to claim that Fine had sexually abused him as a boy. As The Associated Press writes, "Zach Tomaselli, 23, of Lewiston, Maine, said Sunday that he told police that Fine molested him in 2002 in a Pittsburgh hotel room. The third accuser to come forward, Tomaselli said Fine touched him "multiple" times in that one incident." Tomaselli's father, however, told the AP he is certain his son never had any contact with Fine.

Then, last evening, Syracuse Chancellor Nancy Cantor announced that Fine was being fired after more than 35 seasons with the school (he had been on administrative leave since the story broke on Nov. 17). "Frankly, the events of the past week have shaken us all," she said in a statement posted on the school's website. "All of us have the responsibility, individually and collectively, to ensure that Syracuse University remains a safe place for every campus community member and everyone with whom we interact on a daily basis on campus or in the community as part of our learning, scholarship, or work. We do not tolerate abuse. If anything good comes out of this tragedy, it will be that this basic principle is reinforced."

Finally, Syracuse head coach Jim Boeheim expressed regret, the AP says, for his initial expressions of support for Fine that might have been "insensitive to victims of abuse."

From Syracuse, The Post-Standard says that "attorneys for Fine, 65, denied in a statement Sunday afternoon that Fine sexually abused anyone. 'Mr. Fine remains hopeful of a credible and expeditious review of the relevant issues by law enforcement authorities,' it said."

The allegations about Fine follow, of course, the scandal at Penn State University — where former assistant football coach Jerry Sandusky is accused of sexually abusing at least eight young boys for more than a decade. Sandusky says he's innocent. Head coach Joe Paterno and Penn State President Graham Spanier both lost their jobs after coming under criticism for allegedly not alerting authorities to reports about what Sandusky was accused of doing.