Accessibility links
A Kiss No More: Oscar Wilde's Tomb Will Be Protected From Smooches : The Two-Way Since the '90s people have been leaving lipstick kisses on the tomb, but they were damaging the stone.

A Kiss No More: Oscar Wilde's Tomb Will Be Protected From Smooches

A Kiss No More: Oscar Wilde's Tomb Will Be Protected From Smooches 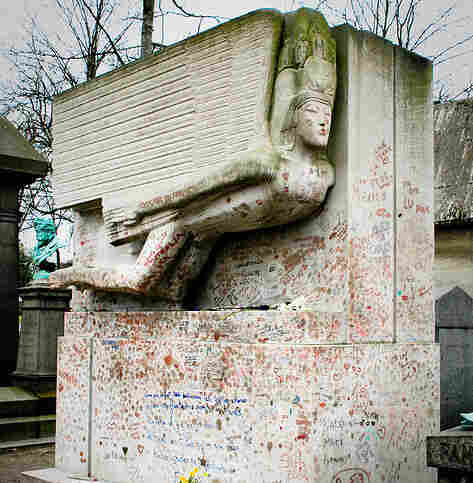 Visitors to the grave of the Irish writer and poet Oscar Wilde won't be able to leave a permanent mark on his tomb anymore. Since the '90s, mostly women started leaving lipstick kisses on his tomb in Paris' Père Lachaise cemetery, a gentle memento for a writer who didn't show much regard for women.

The problem was that cleaning off those kisses was damaging the stone. The Guardian reports:

Merlin Holland, Wilde's grandson, said the lipstick had become a "serious problem" because the grease sinks into the stone. "Every cleaning was causing a bit more stone to wear away," he said.

"No amount of appeals to the public did any good at all. Kissing Oscar's tomb on the Paris tourist circuit has become a cult pastime, which is proving impossible to break. Even if one could catch someone inflagrante delicto – there is a €9,000 (£7,700) fine – most perpetrators are probably tourists, so they would be home before the French authorities could bring them to court.

"From a technical point of view, the tomb is close to being irreparably damaged. Each cleaning has rendered the stone more porous necessitating a yet more drastic cleaning."

Paris and Dublin got together and decided to perserve the memorial and when it opens this week, it will be clear of kisses and also sport a glass barrier, "which will surround it to prevent the kissers from causing further damage."

If you're wondering, Jim Morrison is also buried at the Père Lachaise cemetery.