Accessibility links
Police Clear Occupy Camps In L.A. , Philadelphia : The Two-Way More than 200 protesters were arrested early today in Los Angeles. In Philadelphia, about 40 have been arrested so far. In both cities, police used overwhelming numbers to control the situation and few clashes or injuries have been reported. 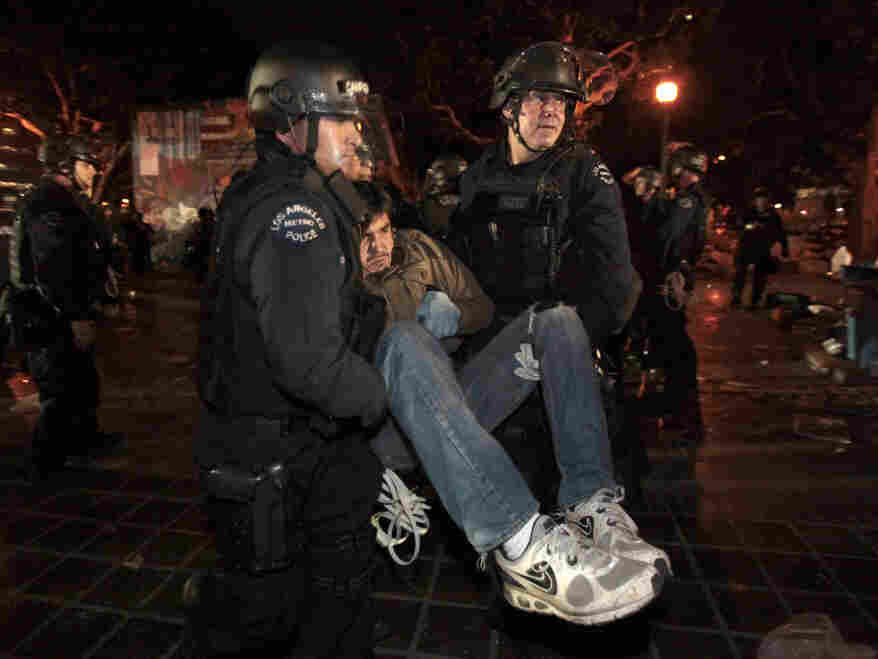 An Occupy protester is arrested early today in Los Angeles as authorities cleared the site near city hall that had been occupied for two months. Lucy Nicholson /AFP/Getty Images hide caption 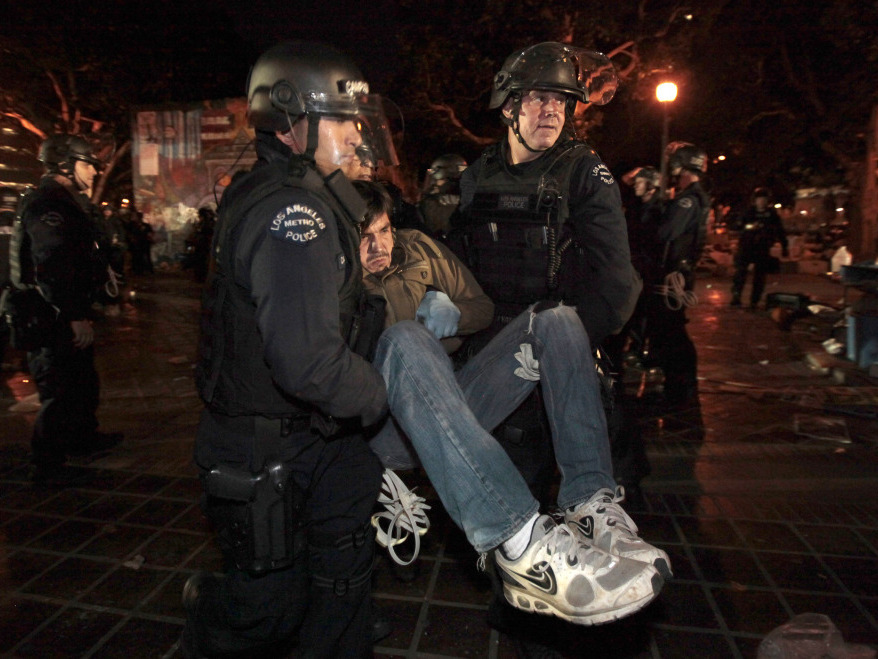 An Occupy protester is arrested early today in Los Angeles as authorities cleared the site near city hall that had been occupied for two months.

The Occupy L.A. campsite near Los Angeles' city hall is "in shambles" this morning after police moved in to clear out protesters who had been ordered to leave, the Los Angeles Times writes. Tents have been "uprooted and strewn all over," the newspaper says.

Our colleagues at KPCC, who were live-blogging through the night, report that more than 200 people were arrested during an operation that involved about 1,400 police officers. It appears the overwhelming show of force, plus a strategic decision by police to divide up the site into several sections rather than to confront protesters with one solid line of officers, kept things mostly peaceful.

On Morning Edition, KPCC's Frank Stoltz told host Renee Montagne that it was "a massive police operation." Many of those arrested resisted passively and were carried or led from the scene by officers.

Only a few protesters remain. They've climbed into trees. Police are using their bomb squad's "cherry picker" to reach up to get those individuals.

Inspired by the Occupy Wall Street movement, the protesters had been camped out near L.A. city hall for two months. Some have vowed they will return to the site near city hall, the Times says.

Meanwhile, in Philadelphia there have been more than 40 arrests at the Occupy protest site near city hall. According to WHYY:

"After reading warnings starting at 1 a.m., officers moved in to arrest people who would not leave Dilworth Plaza. Four men and two women were taken into custody about 3 a.m. The city wants the protesters out so a long-planned $50 million dollar renovation can move forward.

"As officers moved in to make arrests, many Occupy protesters left and starting marching through the streets. About 5 a.m. police arrested about 40 more people near 15th and Hamilton Streets. Police still did not have exact arrest numbers."

The Philadelphia Inquirer says police there also used overwhelming force during the operation, but reports there were some injuries as protesters tried to evade arrest and police pursued them. "At least two police officers reportedly suffered minor injuries," the newspaper says, and "one protester was injured by a police horse, but not seriously." Some of the Philadelphia protesters have obtained a permit that will allow them to hold daytime demonstrations across the street, the Inquirer adds.

KPCC reports that during the clearing operation, "some Occupy protesters tried getting back into the camp to retrieve their possessions. One young lady in tears told KPCC's Shirley Jahad that her pet was in her tent. City services workers dragged full tents with whatever was inside from the site, dumping them into garbage trucks. Trash, flattened tents and the stench of urine remained after the park was cleared."

And the station adds that:

"A police commander says it will take weeks to rehabilitate the park. L.A. Parks and Recreation General Manager John Kirk Mukri told KTLA that the park around City Hall will be closed indefinitely following Wednesday's early morning raid on Occupy L.A. Mukri said the department will make a 'complete assessment' of the damage to the park from the encampment, adding that the irrigation system was likely compromised. That assessment will take a few months to complete, Mukri said.

"Occupy protesters have called for a 4 p.m. rally at L.A.'s Pershing Square Wednesday."

And one note from Philadelphia: WHYY says it's now estimated that about 50 people were arrested there.