Accessibility links
Obama: 'A Make Or Break Moment For The Middle Class' : The Two-Way Drawing on the words of Teddy Roosevelt, President Obama took on income inequality and made the case for continuing the payroll tax cut.

Obama: 'A Make Or Break Moment For The Middle Class'

Obama: 'A Make Or Break Moment For The Middle Class' 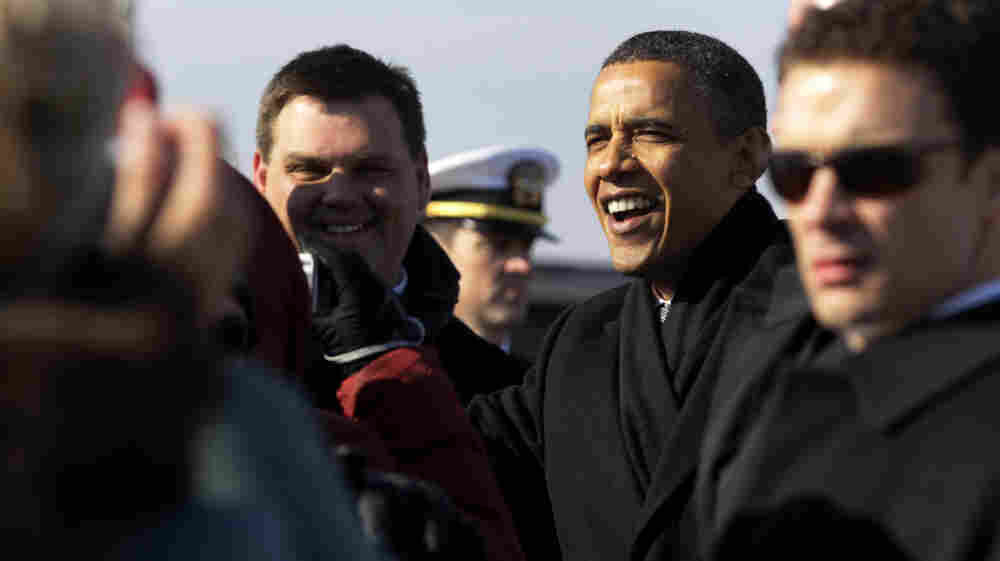 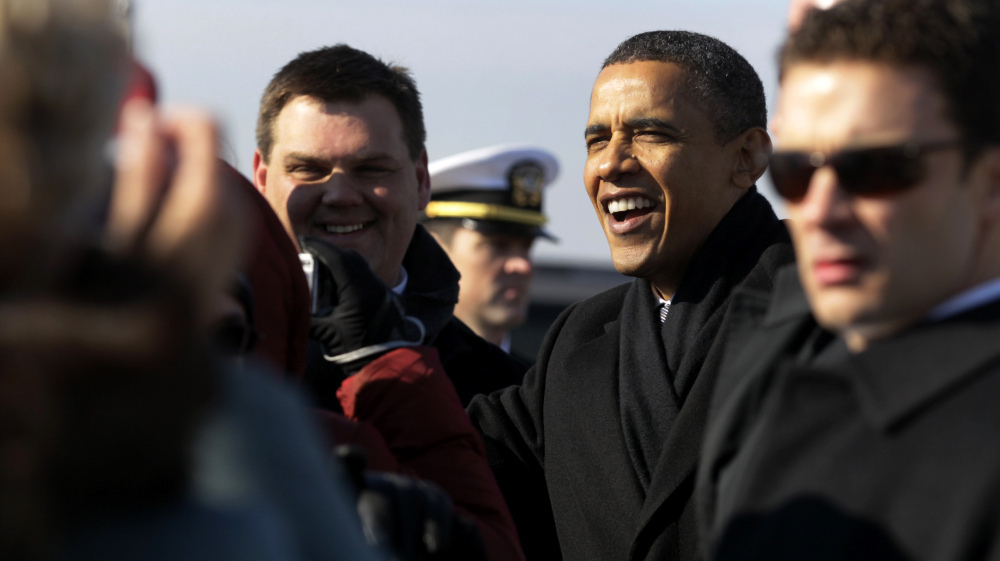 President Barack Obama greets people on the tarmac upon his arrival at Kansas City International Airport.

"This is a make or break moment for the middle class, and for all those who are fighting to get into the middle class," President Obama said in a speech in Osawatomie, Kansas. The speech threw the president in the middle of the conversation about economic inequality that's been central to the demands of the Occupy movement.

The speech also laid down some markers in preparation for the president's reelection battle and he did so with a big bow to Teddy Roosevelt, who delivered a speech calling for a "New Nationalism" in the same city more than 100 years ago.

Mark previewed Obama's speech earlier by digging into Roosevelt's 1910 speech and as expected the president invited plenty of comparisons and as the AP puts it "delivered a sweeping indictment of economic inequality in the U.S." Among the highlights:

-- Central to the president's speech was to push back against Republican's "trickle-down economy." Less regulation and lower tax rates for the rich will not strengthen the economy, he said. "It doesn't work," he said. "It's never worked."

"We simply cannot return to this brand of you're-on-your-own economics, if we're serious about rebuilding the middle class in this country. We know that it doesn't result in a strong economy," Obama said. "It results in an economy that invests too little in its people and its future. It doesn't result in a prosperity that trickles down. It results in a prosperity that's enjoyed by fewer and fewer of our citizens."

-- Obama rejected that he was engaging in class warfare, and laid out his argument for what he sees as a growing gap between the middle class the top earners. This passage from his speech echoes Roosevelt and echoes a lot of what's being said by Occupy protesters:

"Look at the statistics. In the last few decades, the average income of the top one percent has gone up by more than 250%, to $1.2 million per year. For the top one hundredth of one percent, the average income is now $27 million per year. The typical CEO who used to earn about 30 times more than his or her workers now earns 110 times more. And yet, over the last decade, the incomes of most Americans have actually fallen by about six percent. ...

"Inequality also distorts our democracy. It gives an outsized voice to the few who can afford high-priced lobbyists and unlimited campaign contributions, and runs the risk of selling out our democracy to the highest bidder. And it leaves everyone else rightly suspicious that the system in Washington is rigged against them – that our elected representatives aren't looking out for the interests of most Americans.

"... this kind of gaping inequality gives lie to the promise at the very heart of America: that this is the place where you can make it if you try. We tell people, we tell our kids that in this country, even if you're born with nothing, hard work can get you into the middle class; we tell them that your children will have the chance to do even better than you. That's why immigrants from around the world flocked to our shores."

-- On the practical side, Obama called for Republicans to get behind the extension of the payroll tax cut. Obama also touted the Dodd-Frank law, which he said puts Wall Street on a shorter leash. The president said he would call for further legislation that targets Wall Street, saying:

"We shouldn't be weakening oversight and accountability. We should be strengthening them. Here's another example. Too often, we've seen Wall Street firms violating major anti-fraud laws because the penalties are too weak and there's no price for being a repeat offender. No more. I'll be calling for legislation that makes these penalties count – so that firms don't see punishment for breaking the law as just the price of doing business."

-- The president also said it was time to "rethink our tax system more fundamentally."

"A tax code that makes sure everybody pays their fair share," he added. " And laws that make sure everybody follows the rules. That's what will transform our economy. That's what will grow our middle class again. In the end, rebuilding this economy based on fair play, a fair shot, and a fair share will require all of us to see the stake we have in each other's success. And it will require all of us to take some responsibility to that success.

We wanted to share a bit of the passage where President Obama very clearly draws a parallel between his administration that of Teddy Roosevelt's. We've taken this bit from the as-prepared-for-delivery text:

"Theodore Roosevelt disagreed. He was the Republican son of a wealthy family. He praised what the titans of industry had done to create jobs and grow the economy. He believed then what we know is true today: that the free market is the greatest force for economic progress in human history. It's led to a prosperity and standard of living unmatched by the rest of the world.

"But Roosevelt also knew that the free market has never been a free license to take whatever you want from whoever you can. It only works when there are rules of the road to ensure that competition is fair, open, and honest. And so he busted up monopolies, forcing those companies to compete for customers with better services and better prices. And today, they still must. He fought to make sure businesses couldn't profit by exploiting children, or selling food or medicine that wasn't safe. And today, they still can't.

"In 1910, Teddy Roosevelt came here, to Osawatomie, and laid out his vision for what he called a New Nationalism. "Our country," he said, '...means nothing unless it means the triumph of a real democracy...of an economic system under which each man shall be guaranteed the opportunity to show the best that there is in him.'

"For this, Roosevelt was called a radical, a socialist, even a communist. But today, we are a richer nation and a stronger democracy because of what he fought for in his last campaign: an eight hour work day and a minimum wage for women; insurance for the unemployed, the elderly, and those with disabilities; political reform and a progressive income tax."