Accessibility links
VIDEO: 'World's Slowest Fastest Camera' Captures The Movement Of Light : The Two-Way A camera that captures images at the rate of one trillion exposures per second is a device with amazing potential, according to researchers at MIT. 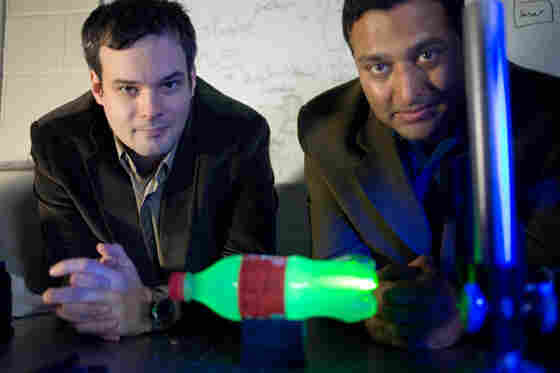 A camera that captures images at the rate of one trillion exposures per second is a device with amazing potential, according to researchers at MIT. The tradeoffs required to reach that speed also mean its a camera with some real drawbacks.

The main drawback is that the system only records visual data in one spatial dimension. So, to create a two-dimensional moving image (a movie), researchers have to recreate the exact same event time and again and scan it one slice at a time. The slices can then be combined to create a movie.

The result? Researchers can watch light (photons!) bounce around inside of a bottle. MIT Associate Professor Ramesh Raskar calls it "the world's slowest fastest camera."

MIT says the $250,000 camera was developed to be more than just a good parlor trick:

"The camera was intended for use in experiments where light passes through or is emitted by a chemical sample. Since chemists are chiefly interested in the wavelengths of light that a sample absorbs, or in how the intensity of the emitted light changes over time, the fact that the camera registers only one spatial dimension is irrelevant."

It could eventually lead the way to advances in scanning physical structures, both manufactured and biological, like an "ultrasound with light." It may even — one day — advance the art of everyday photography.