Accessibility links
U.S. Cites 'Self-Defense,' Concedes Poor Coordination In Pakistan Incident : The Two-Way In late November, American airstrikes killed 24 Pakistani soldiers. The incident added to already frayed relations between the nations. The Pentagon says U.S. forces "acted in self defense," but that there was "inadequate coordination" with Pakistan. 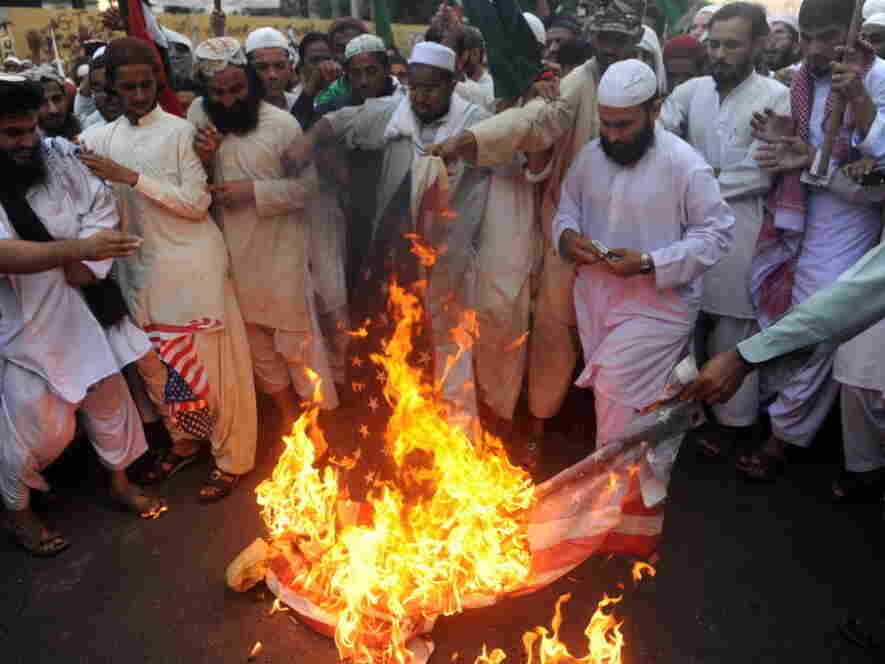 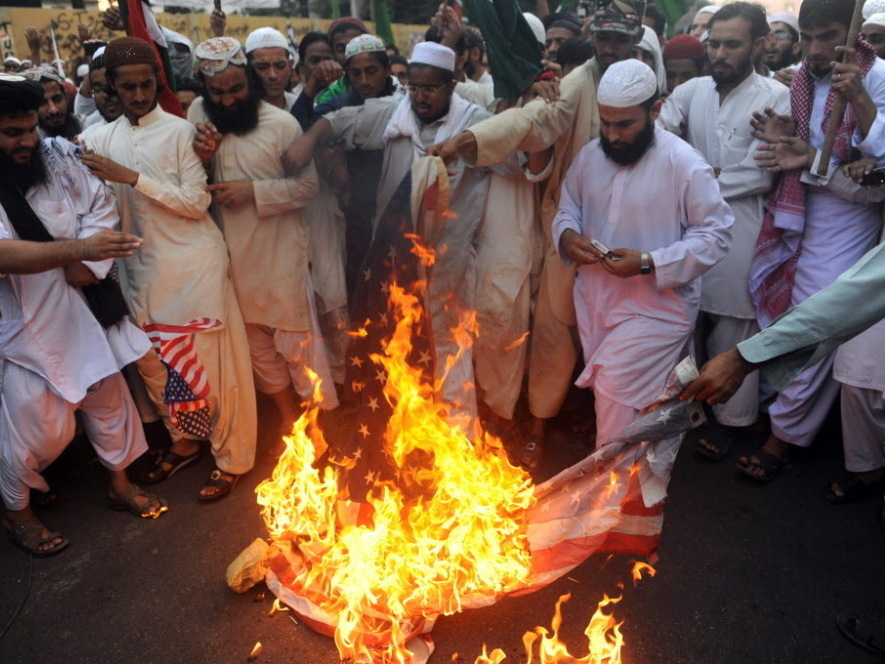 Protesters in Karachi, Pakistan, burned an American flag earlier this month to express their anger over the airstrikes that killed 24 Pakistani soldiers.

American military forces, "given what information they had available to them at the time, acted in self-defense and with appropriate force after being fired upon" when they called for airstrikes along the Afghanistan-Pakistan border in late November in an incident that killed 24 Pakistani soldiers, the Pentagon said this morning.

"Nevertheless," the Defense Department also said in a statement about conclusions reached by its investigating officer, "inadequate coordination by U.S. and Pakistani military officers operating through the border coordination center — including our reliance on incorrect mapping information shared with the Pakistani liaison officer — resulted in a misunderstanding about the true location of Pakistani military units. This, coupled with other gaps in information about the activities and placement of units from both sides, contributed to the tragic result."

The incident damaged already frayed relations between the U.S. and Pakistan, which responded by closing some of its border crossings to U.S. military convoys moving in and out of Afghanistan.

This morning, The New York Times writes of the Pentagon report that:

"Even though it spread blame between both countries, the key finding of the investigation is likely to further enrage Pakistan: that the airstrikes were ultimately justified because Pakistani soldiers fired first on a joint team of Afghan and American special operations forces operating along the often poorly demarcated frontier between Afghanistan and Pakistan. ... Since the airstrikes, Pakistan has steadfastly insisted its forces did nothing wrong, and that they certainly did not fire the first shots."

In its statement, the Pentagon expresses "our deepest regret ... for the loss of life — and for the lack of proper coordination between U.S. and Pakistani forces that contributed to those losses."

Then it goes on to acknowledge there is lack of trust between the U.S. and Pakistani militaries:

"Our focus now is to learn from these mistakes and take whatever corrective measures are required to ensure an incident like this is not repeated. The chain of command will consider any issues of accountability. More critically, we must work to improve the level of trust between our two countries. We cannot operate effectively on the border — or in other parts of our relationship — without addressing the fundamental trust still lacking between us. We earnestly hope the Pakistani military will join us in bridging that gap."

Brig. Gen. Stephen Clark from Air Force Special Operations Command told reporters at the Pentagon that about an hour after U.S. and allied troops started their operation near the Pakistan boarder, they began to take "direct and heavy machine gun fire right over their heads" and then mortars started to land nearby as well.

The fire was coming from a ridge line and the commander on the ground received "word back from his higher headquarters that there [was] no Pakistani military in the area," Clark said. That was the "first point of failure," said Clark, because what headquarters had actually been told by "Regional Command East" and should have relayed to the commander on the ground was that "we are checking ... but we are tracking no Pak mil in the area."

"That was heard at the lower headquarters as 'no Pak mil in the area,' " Clark said.

So the ground commander was told there were no Pakistani troops there, when he should have been told that it was being checked — but none were known to be there, Clark said.

The Pentagon briefing just ended. During it, spokesman George Little cited "misunderstandings" as playing a major role in the incident. Reporters asked Brig. Gen. Stephen Clark from Air Force Special Operations Command several times about why the investigation didn't include references to what Pakistani officials have said happened (in particular, their claim that Pakistani soldiers had not fired on the American troops). Clark said he wished there would have been input from Pakistani officials, but "unfortunately we did not have Pakistani participation in this investigation."

As for what Pakistani officials have said publicly, Clark said "what a country decides to put out in the press is not something that I would put out in a formal report."

Update at 10:13 a.m. ET: "There was no understanding that there were [Pakistani military] border positions in the area" where the soldiers were killed, Brig. Gen. Stephen Clark from Air Force Special Operations Command just told reporters at the Pentagon. He led the investigation.

Update at 10:10 a.m. ET: Brig. Gen. Stephen Clark from Air Force Special Operations Command is briefing reporters about the investigation, which he led. The Pentagon is webcasting the briefing here.