Accessibility links
Voyager 1 Speeds Toward The Brink Of Interstellar Space : The Two-Way The Voyager 1 spacecraft is 11 billion miles from the sun. And every minute, it gets 636 miles closer to its destination: the frontier of interstellar space. The craft is currently between what NASA calls "the solar wind from the Sun and the interstellar wind from death-explosions of other stars." 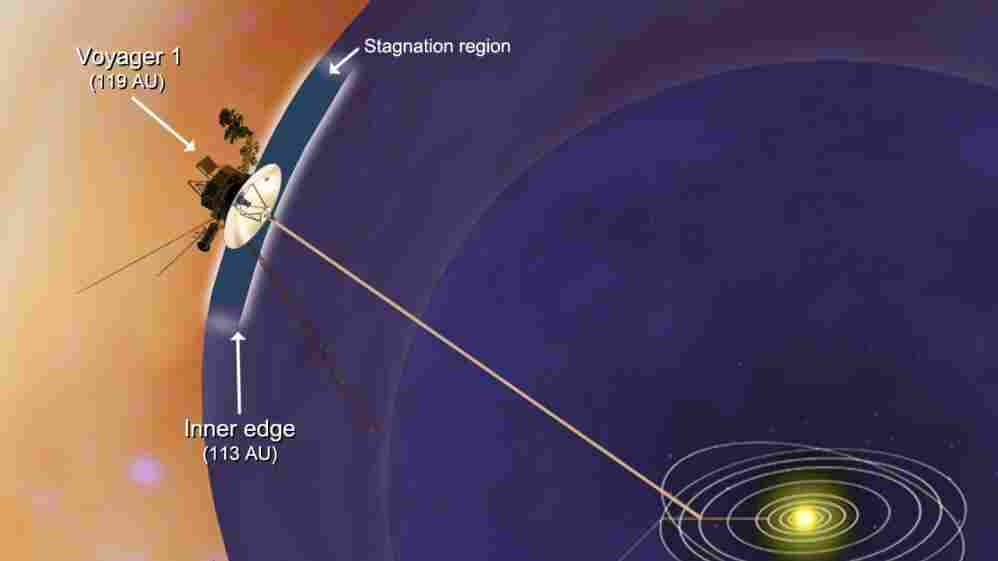 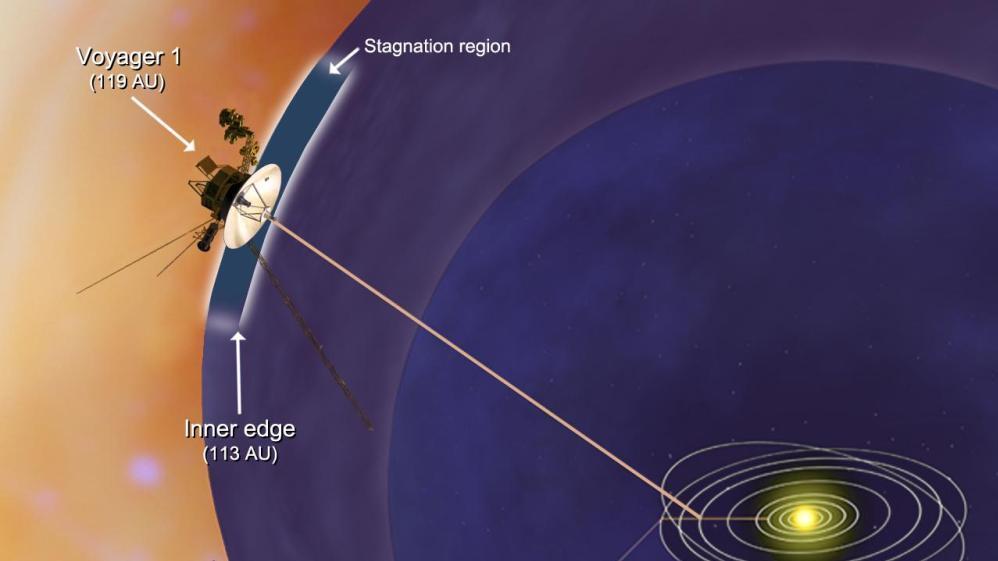 An artist's conception shows Voyager 1 encountering a stagnation region. To the left is interstellar space.

(Note: This post was first published on Dec. 14. It was reposted Monday — the 26th — because that's when it was broadcast on Morning Edition.)

The Voyager 1 spacecraft is 11 billion miles from the sun. And every minute, it gets 636 miles closer to its destination: the frontier of interstellar space.

The craft is currently in what NASA calls, not undramatically, "the boundary between the solar wind from the Sun and the interstellar wind from death-explosions of other stars," an area that astrophysicists also call, less dramatically, a stagnation layer.

When Voyager 1 crosses that threshold, it'll become the first man-made object to do so. That feat, along with the recent discovery of Kepler-22b, a potentially inhabitable planet, means that it's an exciting time to be an astrophysicist. Now, NASA and its two Voyager craft are heading into the great beyond.

"We're still bathed by the same solar wind that we have been for the last 30-some years," Voyager program chief scientist Dr. Ed Stone tells NPR's Steve Inskeep, in an interview airing on Monday's Morning Edition.

That solar wind emanates from (you guessed it) the sun, and it travels at anywhere from around 1 million to 2 million miles an hour. The wind is extremely weak in the outer edges of the solar system, where Voyager is traveling. Stone says it creates a comet-shaped "bubble" around our solar system.

"But once we leave the bubble, we will be, for the first time, surrounded by winds that came from the explosion of other stars," says Stone, who has been Voyager's lead scientist since 1972.

As it goes where no man-made thing has gone before, Voyager 1 will not be able to let us know if it sees something truly remarkable out there — because it no longer sees anything, in the traditional sense. 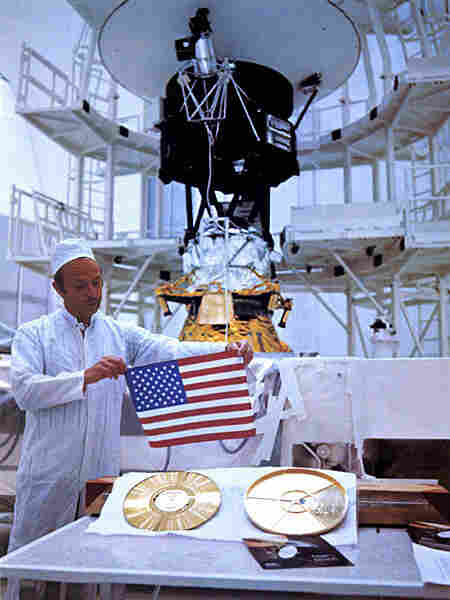 A technician holds a U.S. flag over a gold record containing data from Earth, with a Voyager spacecraft in the background. NASA hide caption 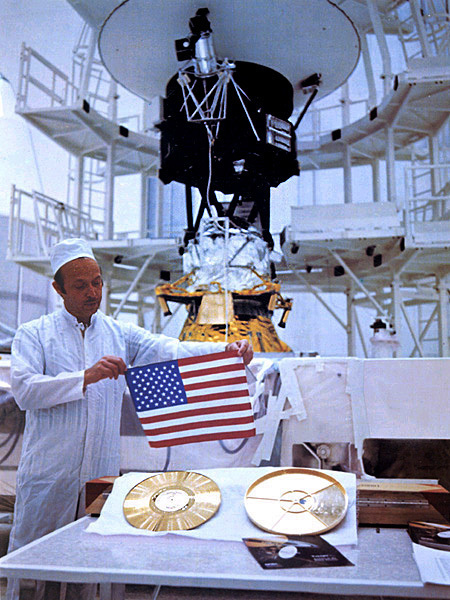 A technician holds a U.S. flag over a gold record containing data from Earth, with a Voyager spacecraft in the background.

"We turned off all the cameras in 1990," Stone says, "and all the other instruments that were designed just to look at bodies as we flew by. Space is really empty. And Voyager will never be very close to any other object in our solar system, or even in our galaxy, for that matter."

That paints a rather lonely picture. But at least Voyager 1 is being trailed by its sibling craft, Voyager 2, which is about 9 billion miles from the sun. In total, the two probes have traveled even farther — they've each logged more than 14 billion miles, as they diverted their courses to study planets in our solar system, NASA says. The agency has created an animated video depicting their paths.

Of course, the edge of interstellar space will not be marked with a handy "Now Leaving Your Solar System" sign. Scientists hope that Voyager will give them more clues about where interstellar space actually begins, and where the bubble ends, as it crosses over the boundary.

"We have only had estimates," Stone says. "The estimates varied by a factor of two... the size of the bubble is determined by this pressure of the wind blowing outward, pushing against the wind outside. And we don't know exactly... how much pressure there is outside, pushing back."

"My expectation is that it's probably, at most, another billion miles," Stone says, "and may in fact be only a few hundred million miles, before we reach the edge of the bubble. We're getting very close now."

So at the most, Stone says, Voyager 1 will leave our solar system within three years. And when it does, NASA wants some answers.

"We want to explore interstellar space itself," Stone says. "We have some ideas of what's out there, from data, and observations from Earth. We believe that we are in a cloud of material that was ejected by the explosion of a series of supernova, about 5 to 10, 15 million years ago, very near the sun. And that we will be embedded in the material from those giant explosions, and the magnetic field which was swept up by the shells of material ejected by those exploding stars. So, we're very interested in learning more precisely what's really outside of the bubble, pressing back inward."

Once they've reached interstellar space, the Voyager spacecraft will also have a chance to deliver their golden cargo — the data records that include 116 pictures, along with sounds from Earth. Those include songs from Louis Armstrong, Beethoven, and a Navajo tribe.

And in Amoy, a language from eastern China, the records carry this message: "Friends of space, how are you all? Have you eaten yet? Come visit us if you have time."

It may seem risky to send an open invitation to the universe that tells alien races to stop by for a bite. But it's not as if Earth can send many invitations. That's because of the unique way our solar system's planets were aligned in 1977, when the Voyager craft were launched.

"That was an opportunity that happens every 176 years," Stone says, "to send a spacecraft past all four of the giant outer planets: Jupiter, Saturn, Uranus and Neptune."

The Voyager spacecraft are expected to stay functional until at least 2020, and possibly until 2025.

Toward the end of the interview, Stone said that in the Voyager mission, every day seems to bring a new revelation about our solar system. In doing so, he voiced an opinion that wouldn't be out of place on the space probes' gold records.

"No matter what you think you know," he said, "what there is to learn is even more interesting."