Accessibility links
Bomb Wreaks Death, Destruction In Damascus : The Two-Way Dozens of people were killed or injured. The Assad regime is blaming its opponents. Activists are wondering whether the regime was behind the attack. 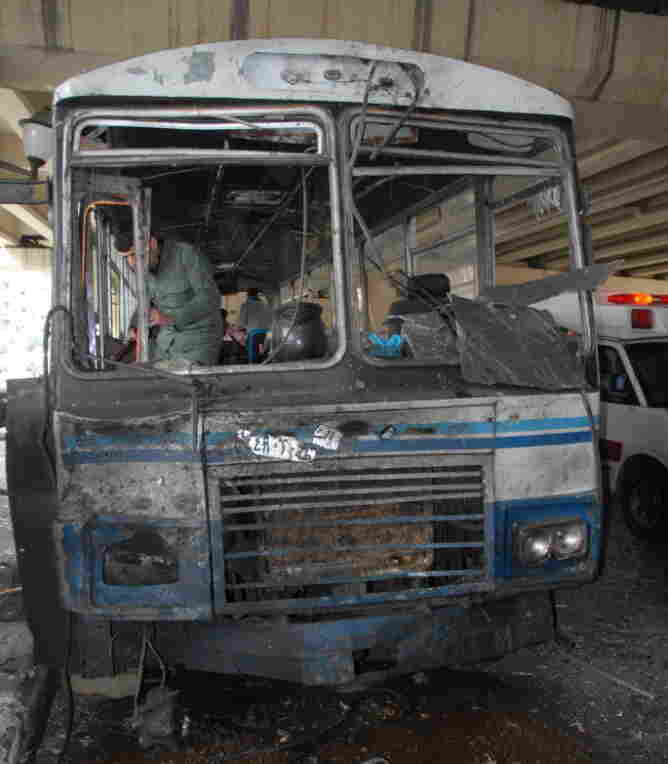 Syria's official news agency distributed this photo of a bus said to have been damaged by today's explosion in Damascus. AFP/Getty Images hide caption 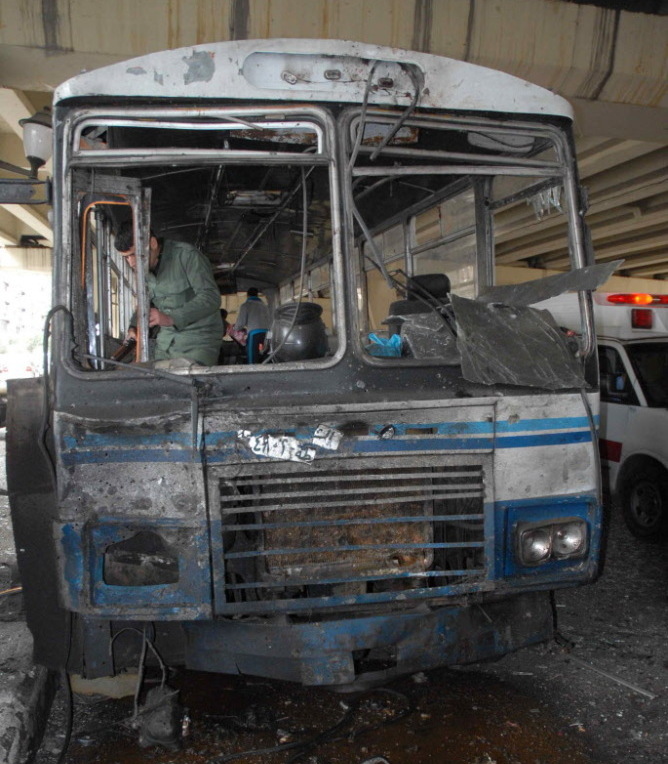 Syria's official news agency distributed this photo of a bus said to have been damaged by today's explosion in Damascus.

There's been an explosion in central Damascus today and there are reports of multiple deaths and dozens of injuries.

As always in Syria, where the regime of President Bashar Assad tries to control the news, it's difficult to get an accurate sense of just what is going on. The regime is blaming its opponents, who have been protesting against Assad since last spring. Activists are questioning whether the attack was staged by supporters of the regime to make the opposition look bad.

Here's some of what's being reported:

-- "An explosion ripped through a police bus in the center of Syria's capital Friday, killing at least 10 people and possibly 25 in an attack authorities blamed on a suicide bomber, a Syrian official and state-run TV said." (The Associated Press)

-- "A suicide attacker has detonated a bomb in Damascus, Syrian state TV says. It said dozens of people were killed or wounded in the blast in Midan district. It comes two weeks after 44 people died in blasts the authorities blamed on terrorists. Opposition activists accused the government of staging them." (BBC News)

-- "Footage broadcast by Syria Television showed the shattered, blood splattered windows of what appeared to be a police bus. The official SANA news agency spoke of casualties among both civilians and security force personnel. Al Jazeera's Hashem Ahelbarra, reporting from the Turkish town of Antakya, near Syria's northern border, said it is unclear who was behind the attack." (Al-Jazeera)

-- "Syrian blogger Maysaloon writes that when examining culpability for today's reported suicide attack in Damascus, 'we cannot rule out rogue elements in the opposition' but adds that there are several questions that need answering: The fact that only hours beforehand, Colonel Riad al Asaad had warned of further attacks against the regime, has only stoked the fires of propaganda against the Free Syrian Army. Yet the fact remains, why would a suicide bomber carry out such attacks with such timing and limited success, when there are enormous pro-regime demonstrations that are held in the Ummayad square or in Aleppo?" (The Guardian)

As the AP also notes:

"Although the nearly 10-month-old uprising in Syria has convulsed many parts of the country, Damascus has been relatively quiet under the tight control of ruthless security agencies loyal to President Bashar Assad.

"But violence in the capital has been on the rise. On Dec. 23, according to the Syrian authorities, two car bombers blew themselves up outside the heavily guarded compounds of the country's intelligence agencies, killing at least 44 people and wounding 166."