Accessibility links
Obama Administration Rejects Keystone Pipeline Proposal : The Two-Way President Obama said the rejection wasn't based on the merits of the project, instead it was rejected because the State Department did not have sufficient time to make a proper decision. 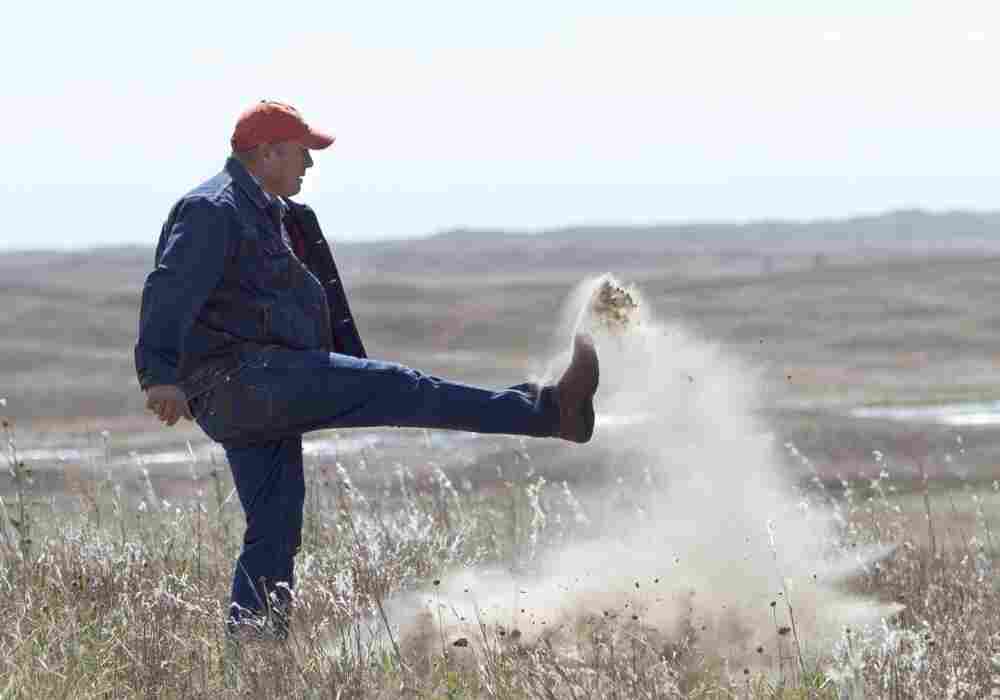 Atkinson, Neb., rancher Bruce Boettcher, who opposes the Keystone XL pipeline, kicks up sand on his land, to demonstrate the fragility of the sandhills near the planned route of the pipeline. Nati Harnik/AP hide caption 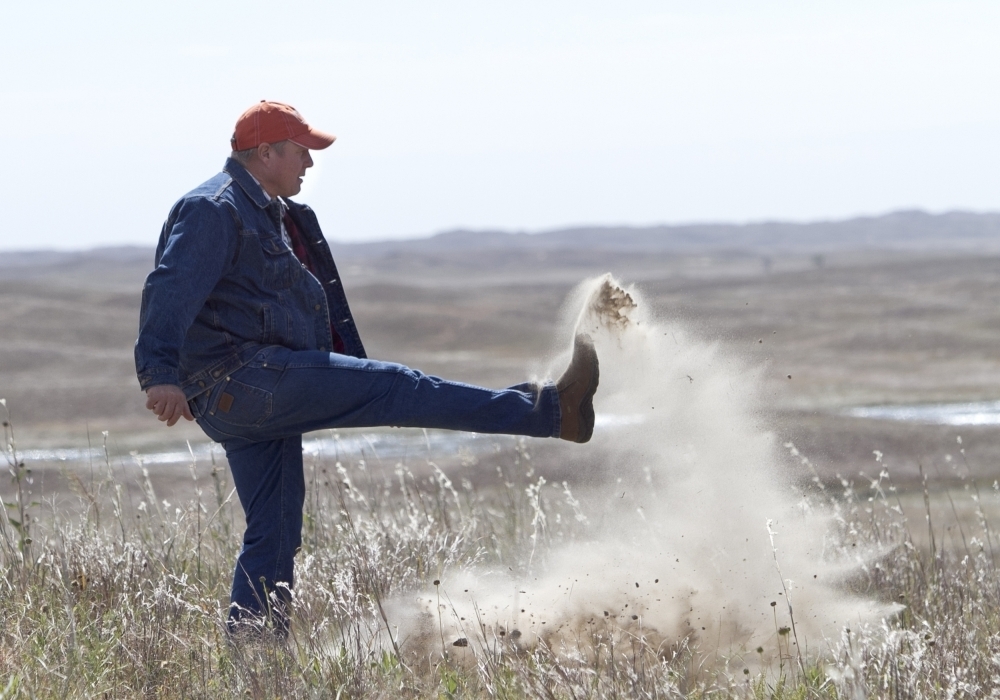 Atkinson, Neb., rancher Bruce Boettcher, who opposes the Keystone XL pipeline, kicks up sand on his land, to demonstrate the fragility of the sandhills near the planned route of the pipeline.

Saying it did not have sufficient time to properly vet the proposal, the State Department said it would recommend rejecting a proposal by TransCanada to build a 1,700 mile pipeline, which would carry oil from Canada to refineries in Texas.

"As the State Department made clear last month, the rushed and arbitrary deadline insisted on by Congressional Republicans prevented a full assessment of the pipeline's impact, especially the health and safety of the American people, as well as our environment," the President said in a statement. "As a result, the Secretary of State has recommended that the application be denied. And after reviewing the State Department's report, I agree."

As we've reported, the Keystone XL pipeline has become a rallying point for environmentalists, who opposed it because it would cross the environmentally sensitive Sandhills of Nebraska. The president first sought to put off a decision on the pipeline until after the 2012 elections, but he agreed to make a decision by Feb. 21 as part of the payroll tax cut negotiations.

Republicans have pressured to the president to approve the project, saying it will create thousands of jobs and give the United States some energy independence.

House Speaker John Boehner, a Republican from Ohio, criticized the president's decision almost immediately after it was announced.

"The president is selling out American jobs for politics," Boehner said at a news conference, adding that the move destroys "tens of thousands of jobs and [is] shipping American energy security to the Chinese."

The president pushed back on that criticism, saying this decision wasn't made based on the merits of the project, but instead on the timetable.

"I'm disappointed that Republicans in Congress forced this decision, but it does not change my Administration's commitment to American-made energy that creates jobs and reduces our dependence on oil," the president said.

We'll have more on this story as it develops. Note that we've re-written the top of this post to reflect the news.

Update at 4:15 p.m. ET. Administration Will Allow It To Reapply:

As we had noted before, The Washington Post is reporting that the administration will ultimately allow TransCanada to resubmit a proposal that reroutes the pipeline around the Sandhills of Nebraska. The Post reports:

"The administration's decision includes language making it clear that TransCanada can reapply, stating, 'The determination does not preclude any subsequent permit application or applications for subsequent projects.'

In November, after President Obama announced a delay in his decision, TransCanada said it would reroute the pipeline.

The AP reports Canadian Stephen Harper, who has expressed his displeasure at the delay before, said "he was profoundly disappointed..."

Through his spokesperson Harper said he hoped the pipeline would eventually be built.

McClatchy has posted President Obama's full statement on its website. Of note, is that the president says the decision was not made not on the merits of the project, but because the State Department had insufficient time to consider it.

"I'm disappointed that Republicans in Congress forced this decision, but it does not change my Administration's commitment to American-made energy that creates jobs and reduces our dependence on oil," the president said.

Former Massachusetts Gov. Mitt Romney, who is also the frontrunner in the Republican presidential race, said this decision from the Obama administration shows it puts "politics ahead of sound policy."

"If Americans want to understand why unemployment in the United States has been stuck above 8 percent for the longest stretch since the Great Depression, decisions like this one are the place to begin," Romney said in statement.

The Los Angeles Times reports that the petroleum industry has said the 1,700 mile pipeline, which would carry oil from Canada to refineries in Texas, would create at least 20,000 jobs, "but the State Department and independent groups estimate that no more than 6,000 jobs would be generated."

Update at 2:31 p.m. ET. Pipeline Must Be 'Methodically Weighed':

Jay Carney, the president's press secretary, did not confirm reports that President Obama had come to a decision at his daily briefing this afternoon. But, as the AP reports, he did start making the case for the rejection of the pipeline plans, saying "a February deadline set by Congress was 'purely political' and did not allow for a proper review of the project."

"I'm not going to get ahead of the administration or the secretary of state or the president," Carney added. "We may have more information for you later in the day."

Politico, which has also confirmed the story with "multiple sources," reports that this decision will further anger Republicans, who have "endlessly attacked President Barack Obama for putting environmental interests and the green lobby ahead of a project that they say would create thousands of jobs."

The Republican National Committee took to Twitter, just now, to criticize the decision.

"President Obama's decision to block the Keystone XL energy pipeline is both economically destructive and politically self-serving," Reince Priebus, the committee's chairman said via Twitter. "Obama has sacrificed 20,000 American jobs and an affordable, secure energy source simply to please his liberal base."

The Los Angeles Times reports that it's still unclear whether the Obama administration will reject the pipeline proposal outright or try to stick to the original timeline, which gives the State Department more time to evaluate the proposal.

In his press briefing yesterday, the president's press secretary Jay Carney expressed the administration's displeasure with the rush timeline agreed to during the payroll-tax negotiations.

"We made clear back in December that a political effort to short-circuit that process for ideological reasons would be counterproductive because a proper review that weighed all the important issues in this case could not be achieved in 60 days," Carney said. He added, "It is a fallacy to suggest that the President should sign into law something when there isn't even an alternate route identified in Nebraska."