Accessibility links
Rick Perry Quits GOP Presidential Race, Endorses Gingrich : The Two-Way The Texas governor leaves a race he once led. He throws his support to the former House speaker. "There is no viable path forward for me," Perry told supporters this morning in South Carolina. 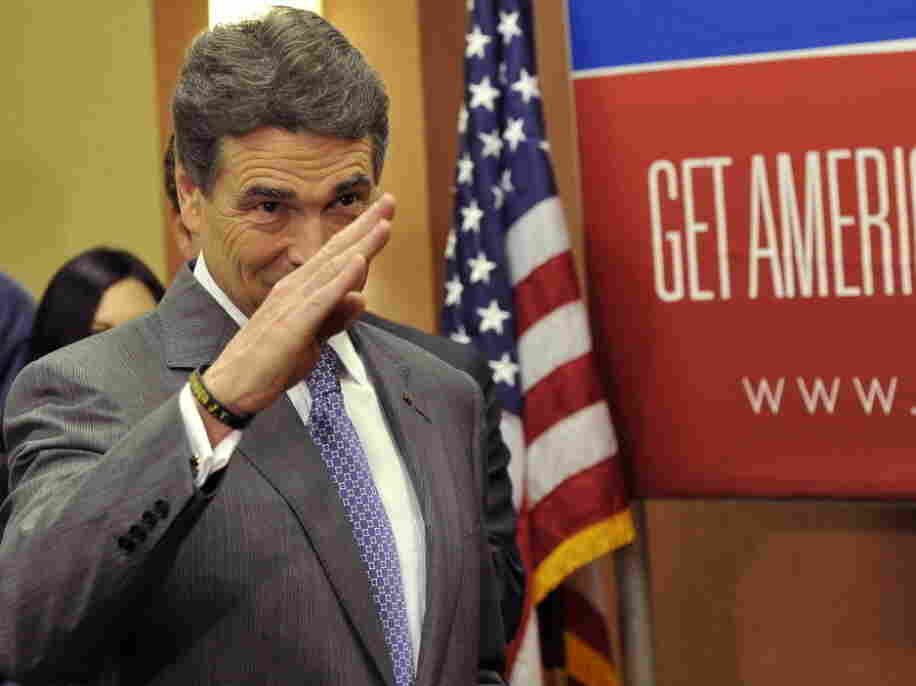 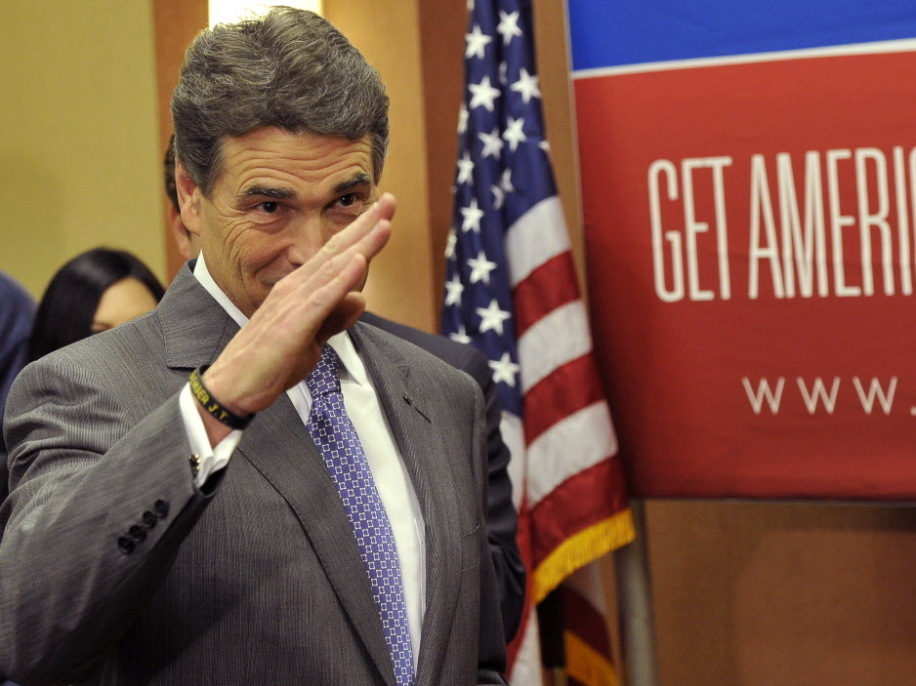 Texas Gov. Rick Perry salutes after announcing that he is suspending his campaign as a Republican presidential candidate.

Saying that "there is no viable path forward for me," Texas Gov. Rick Perry just confirmed that he is leaving the 2012 race for the Republican presidential nomination.

Then, he went on to endorse the bid of former House Speaker Newt Gingrich — just two days before South Carolina Republicans go to the polls in a primary that could either cement former Massachusetts Gov. Mitt Romney's lead in the race for the GOP nomination or give new life to someone else's; perhaps Gingrich's.

Gingrich, Perry said at an event in North Charleston, S.C., is not perfect but is "a conservative leader who will bring about real change." He also called the road down which President Obama is leading the nation, "a very dangerous one."

He leaves the race, the governor said, "neither discouraged nor disenchanted." Rather, he has been "highly rewarded by the experience."

Texas Gov. Rick Perry is going to drop out of the Republican race for the White House, sources are telling The New York Times and CNN.

NPR has not independently confirmed the news.

We'll pass along more as the story develops. Perry is expected to hold a news conference at 11 a.m. ET.

When he jumped into the race last August, Perry quickly vaulted to the top of national polls of Republicans. But by late September, his numbers were slipping. And he's now got only single-digit support, as RealClearPolitics.com's tables show.

Update at 10:45 a.m. ET. "One Mistake After Another" Derailed His Campaign:

From Texas, the Austin American-Statemen says "two Perry sources" have confirmed that the governor will end his campaign today and endorse former House Speaker Newt Gingrich's bid. It also offers a quick recap of what the newspaper refers to as "one mistake after another" by Perry during the campaign. A sampling:

"In a bizarre New Hampshire speech that went viral, Perry was overly giddy, leading many to wonder whether he was drunk. (He wasn't.) In a series of interviews over several days, he said it was fun to ask President Barack Obama about his birth certificate. And — perhaps most significantly — in a November debate, he forgot the name of one of the federal departments he proposed to close. That moment, which Perry concluded by sheepishly saying 'oops,' will be remembered as one of the worst candidate moments of the 2012 campaign."

Update at 10:25 a.m. ET. Tonight's Debate May Be A Factor In Announcement's Timing:

It appears, NPR Senior Washington Editor Ron Elving tells our Newscast desk, that Perry wants to withdraw before tonight's scheduled CNN Southern Republican Presidential Debate in South Carolina (at 8 p.m. ET). And, Ron adds, Perry likely wants to get out before Saturday's primary in the Palmetto State because he's getting only about 4 percent support in the latest polls of South Carolina Republicans. 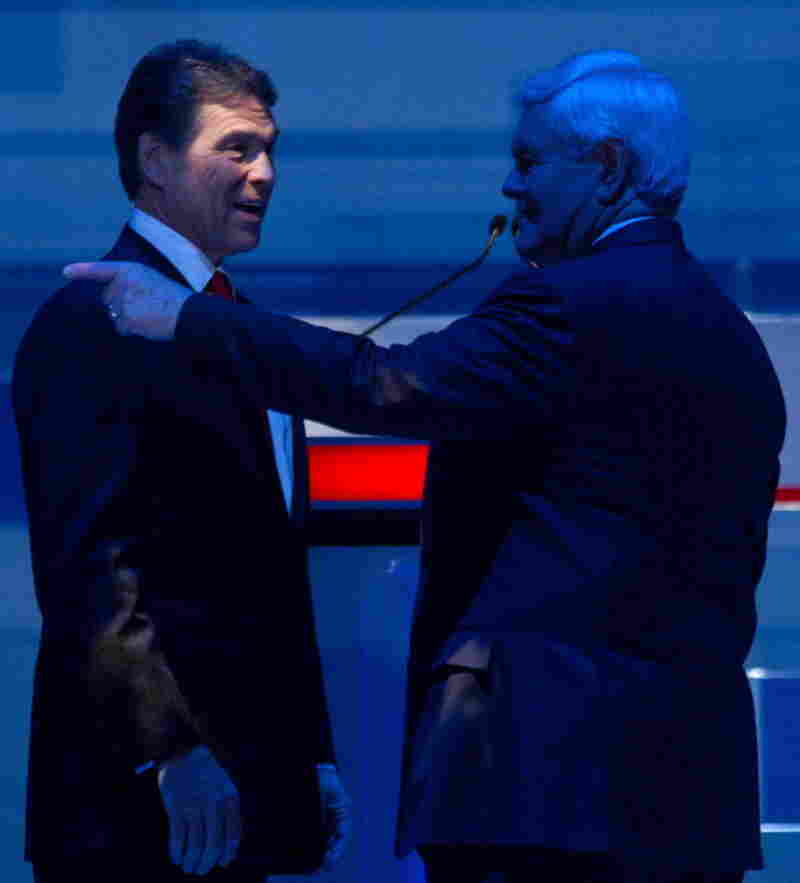 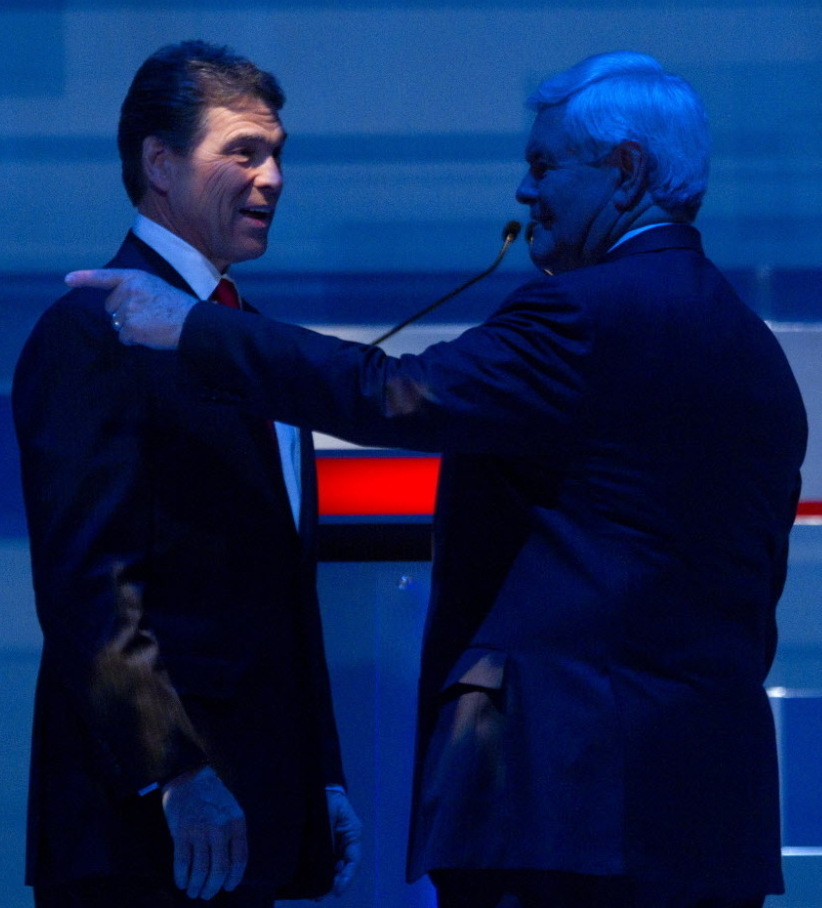 Adding to the reporting about a likely Perry endorsement of former House Speaker Newt Gingrich's bid for the GOP nomination, The Wall Street Journal notes that such support would come "just as polls suggest that Mr. Gingrich is closing in on front-runner Mitt Romney in South Carolina as voters prepare to cast ballots here Saturday."

At RealClearPolitics.com, the latest "RCP Average" of polls from South Carolina shows Romney 7.6 percentage points ahead of second-place Gingrich in the state.

Update at 10:05 a.m. ET. More On Possible Endorsement Of Gingrich:

Politico says its sources have confirmed that Perry met yesterday with former House Speaker Newt Gingrich to discuss Perry's exit from the campaign and an endorsement of Gingrich's bid by the Texas governor.

"Gingrich will be hoping the move gives him a boost as [he] tries to consolidate conservative support ahead of Saturday's primary [in South Carolina], aiming to unite the voters who had been splitting between him, Perry and Rick Santorum."

The Associated Press is now reporting it's been told that the Texas governor will endorse former House Speaker Newt Gingrich's presidential bid. The wire service says its sources are "Republican officials who spoke on the condition of anonymity to avoid pre-empting Perry's announcement,"