Accessibility links
Late Tuskegee Airman Gets Arlington Honors As 'Red Tails' Film Opens : The Two-Way A member of the famed Tuskegee Airmen was buried Friday morning, the same day that Red Tails, a film dramatizing the pilots' heroic feats, came out. During World War II, Luke Weathers Jr. "shot down two German fighter planes while escorting a damaged bomber to its base," the AP reports. 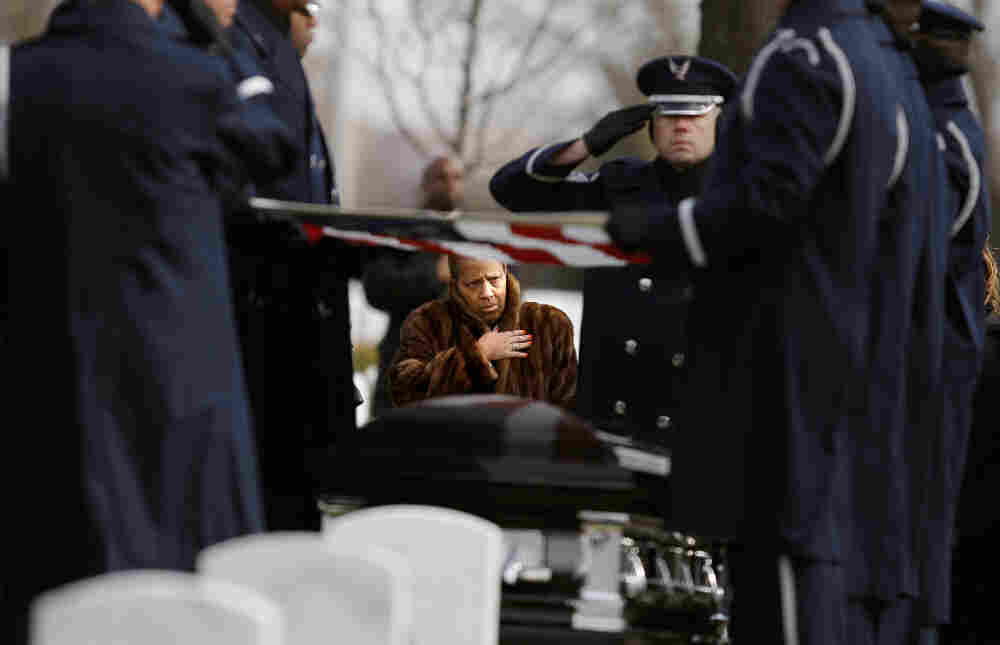 Family, friends and admirers salute the casket of Luke Weathers, Jr., one of the original Tuskegee airmen, at his burial ceremony at Arlington National Cemetery. Chip Somodevilla/Getty Images hide caption 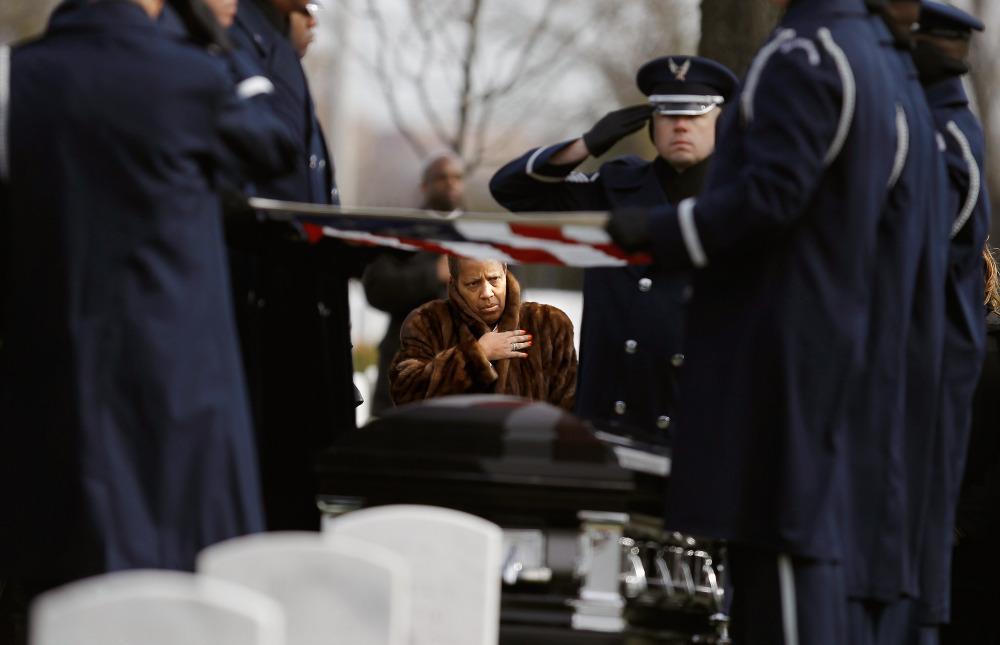 Family, friends and admirers salute the casket of Luke Weathers, Jr., one of the original Tuskegee airmen, at his burial ceremony at Arlington National Cemetery.

A member of the famed Tuskegee Airmen was buried in Arlington National Cemetery this morning, the same day that Red Tails, a film dramatizing the pilots' heroic feats, was released in U.S. theaters.

During World War II, Luke Weathers Jr. "shot down two German fighter planes while escorting a damaged bomber to its base," the AP reports.

Weathers' widow, Jacqueline Weathers, his children, and others attended Friday's funeral. Many attendees wore red ties and scarves to honor the veteran. As is the case for many funerals in Arlington, the ceremony took place some months after the veteran's death. Weathers died on Oct. 15 in Arizona, where he had moved several years ago.

A recipient of the Congressional Gold Medal, Weathers also earned a Distinguished Flying Cross. In the Red Tails squadron, the native of Memphis, Tenn., flew P-51 and P-39 fighters — he named his plane "The Spirit of Beale Street."

In the Air Force, Weathers rose to the rank of a lieutenant colonel; after the war, he became the first black air traffic controller in Memphis, according to WMC 5 News.

"He would talk about his hard trials and tribulations to others, to children, because he never wanted us to feel like this (racism) is a reason we couldn't make it," his daughter, Trina Weathers Boyce, told the AP by phone Thursday. "He would tell us nothing good comes easy. He'd say there are going to be barriers ... and you can overcome them."

Many surviving members of the Tuskegee Airmen gathered in Washington, D.C., last August, to mark their 70th anniversary.

Red Tails screenwriter John Ridley spoke to Morning Edition co-host Renee Montagne for Friday's show. He described what it was like to interview the former pilots:

Ridley also explained that the pilots' significance went far beyond the color of their skin. Because as they broke the color barrier to take part in aerial combat, they also brought a different strategy into play:

"These B-17s, the large planes, The Heavies, as you called them, they would have about 10 or 11 men on board. They would have these bomber trains of maybe one hundred B17s; you're talking about a thousand men in the air. And at the time they were losing 20, 30, 40 of these bombers per mission. So you're talking about thousands of men on a mission.

"You can imagine what that was doing to the psyche, at the time, on the home front, losing this many men. And part of the reason was because originally the pilots were trained - the white pilots were trained, go after the German jet fighters, chase them down - leaving the bombers exposed, other German planes would come in behind and shoot down these bombers.

"The Tuskegee Airmen, the Red Tails, were specifically told do not chase the plane. Don't chase glory, going after the German fighters. Stay with the bombers. It was a big deal. It was huge. Different way of fighting - changed the course of the war. It really did."

The funeral for Weathers included "a flyover of four F-16 jets in the Missing Man formation, a special honor reserved for pilots, by the 113th Wing of the D.C. Capital Guardians, the same unit that guards the airspace over the nation's capital," the AP reports.