Accessibility links
Lost In Translation: Because Of Twitter Joke, Brits Denied Entry To U.S. : The Two-Way The British tourist said he was going to "destroy America," meaning he was going to party hard, but Homeland Security took the threat seriously.

Lost In Translation: Because Of Twitter Joke, Brits Denied Entry To U.S.

Lost In Translation: Because Of Twitter Joke, Brits Denied Entry To U.S.

Talk about lost in translation: Today's British press is buzzing with a story in the British tabloid The Daily Mail, which reports that two British travelers were denied entry into the U.S., after authorities uncovered two tweets.

In one Leigh Van Bryan quipped, "Free this week, for quick gossip/prep before I go and destroy America." And in another Van Bryan said that he was going to "dig up Marilyn Monroe." 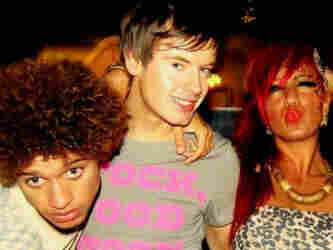 Van Bryan told the Daily Mail that in British English, "destroy America" was meant as in we're going party hard in America. And the Marilyn Monroe tweet was a reference to the TV show Family Guy.

Still, the Department of Homeland Security took the "threats" seriously. The Daily Mail reports what happened next:

"After making their way through passport control at Los Angeles International Airport (LAX) last Monday afternoon the pair were detained by armed guards.

"Federal agents even searched his suitcase looking for spades and shovels, claiming Emily was planning to act as Leigh's 'look out' while he raided Marilyn's tomb.

"Bar manager Leigh, from Coventry, and Emily [Banting], 24, from Birmingham, were then quizzed for five hours at LAX before they were handcuffed and put into a van with illegal immigrants and locked up overnight.

"They spent 12 hours in separate holding cells before being driven back to the airport where they were put on a plane home via Paris."

In a document that was handed to Van Bryan, it states that he admitted to posting the the two statements on twitter and that he had been flagged on the government's "One Day Lookout" list, which is created after a government analysis on a passenger list.

"I kept saying to them they had got the wrong meaning from my tweet but they just told me 'you've really [messed] up with that tweet boy,'" Van Bryan said. "When I was in the van I was handcuffed and put in a cage. I had a panic attack."

Earlier this month, the Department of Justice put out a call for more information on an application that could scrape social media sites to collect "actionable intelligence."

Perhaps The New York Times wraps up the story best:

"As American security agencies increasingly take to Twitter, Facebook and other social networking sites in search of potential threats, two European travelers say the system lacks one important quality: a sense of humor."