Accessibility links
With Governor's Signature, Indiana Becomes 'Right To Work' State : The Two-Way It makes the state the first to enact a right to work law in a decade and also the first to enact such a law in the Rust Belt. Union members were planning a protest in downtown Indianapolis, the site of this year's Super Bowl. 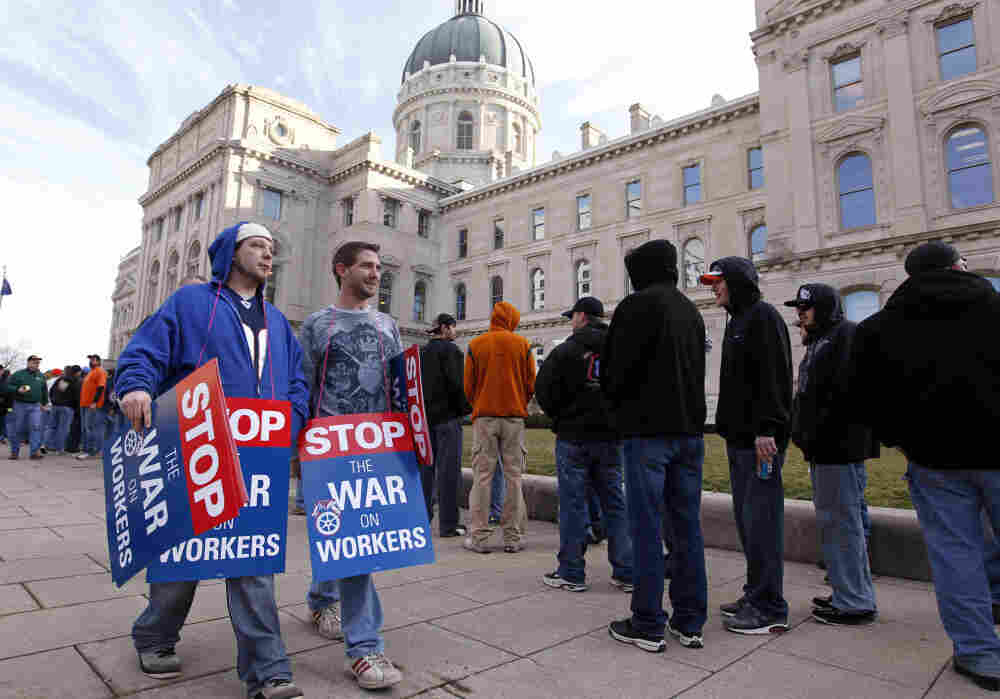 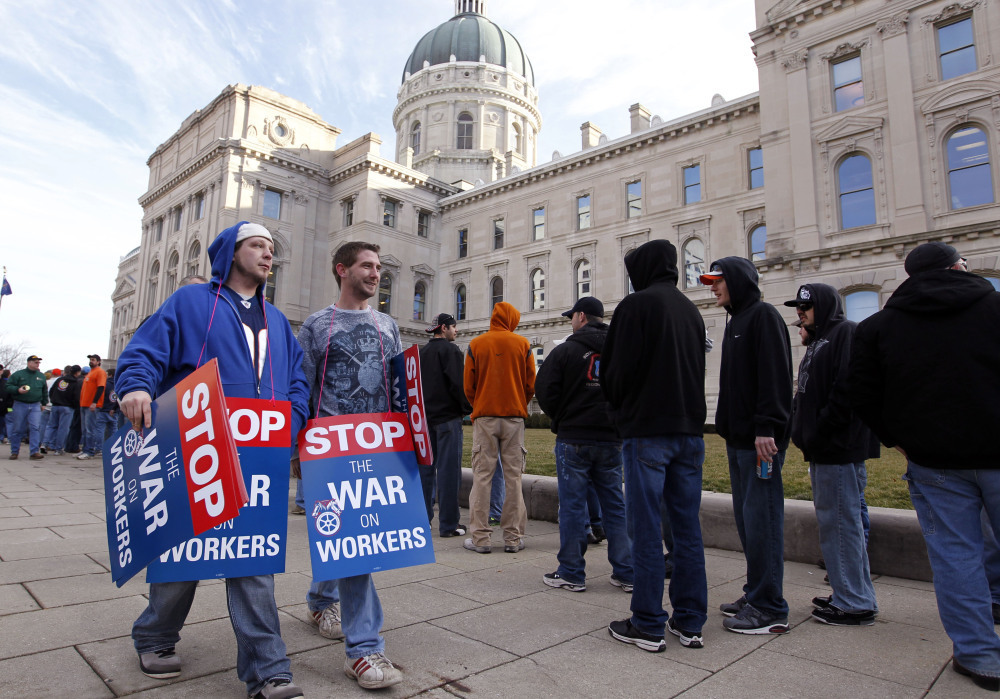 Union members protesting the right-to-work legislation wait to enter the Statehouse in Indianapolis on Wednesday.

Update at 3:09 p.m. ET. With a signature, Gov. Mitch Daniels has turned Indiana into a right to work state. The governor signed into a law a controversial bill that would prohibit labor contracts from requiring workers to pay union dues, according to the AP.

The controversial "right to work" bill was approved by the state Senate today with a 28 to 22 vote. Once Daniels signs the bill into law, which he is expected to do later today, Indiana will be the first state in a decade to pass a right to work law.

The Indianapolis Star reports that as the senate voted, a loud though calm crowd of thousands of protesters lined the hallways of the Statehouse. The paper adds:

"John Hatfield and Larry Moran of Carpenter's Local 232 in Fort Wayne stood along Washington Street with a protest signs — just two of many people doing the same. Hatfield said lawmakers are trying to take away union members' living wages.

"'I don't see how this is going to gain one job,' he said. 'It's a right to work for less and lowering our wages. We have good paying jobs in Indiana, why do they want to take those away?'

"Moran said unions provide training for workers, so he believes weaker unions will result in lower quality work. 'It's a race to the bottom,' he said."

The AP reports that this has been a long fight that sparked a walkout of Democrats last year. Also, the Super Bowl will be held this weekend in Indiana and the protests are threatening to spill over onto Super Bowl events.

"Shame on you!" activists chanted. "See you at the Super Bowl!"

The AP reports that Daniels warned protesters that a move to protest at Super Bowl events would backfire.

"Supporters say right to work helps create a pro-business climate that attracts employers and increases jobs. Opponents say it leads to lower wages and poorer quality jobs, and they accused Republicans of rushing the bill through to avoid disrupting the Super Bowl. ...

"Experts say many factors influence states' economies and that it's nearly impossible to isolate the impact of right to work. For major industries, access to supplies, infrastructure, key markets and a skilled workforce are key factors, according to business recruitment specialists. For a state's workers, the impact of right-to-work legislation is limited because only about 7 percent of private sector employees are unionized. Over the years, job growth has surged in states with, and without, right-to-work laws."

The New York Times reports that if those protests do disrupt Super Bowl events, it could put players, who are themselves union members, in an awkward spot.

"While we're out here, we're going to make sure the folks who work for a living and unions they belong to know we appreciate them, we appreciate the strength they gave us for our fight," said Smith. "We're always going to be standing shoulder to shoulder with men and women who want to collectively protect themselves."