Accessibility links
California's Same-Sex Marriage Ban Is Unconstitutional, Court Says : The Two-Way The decision on "Prop 8" by the U.S. 9th Circuit Court of Appeals is now expected to be appealed to the Supreme Court.

California's Proposition 8 ban on same-sex marriages is unconstitutional, a three-judge panel of the U.S. 9th Circuit Court of Appeals ruled today in a much-anticipated decision from the nation's most populous state. The judges upheld a lower court's ruling.

As you'd expect, the ruling has drawn praise from those who support same-sex marriage and condemnation from those who oppose it. Both sides acknowledge that the decision isn't the last word on the subject — an appeal to the U.S. Supreme Court is expected. 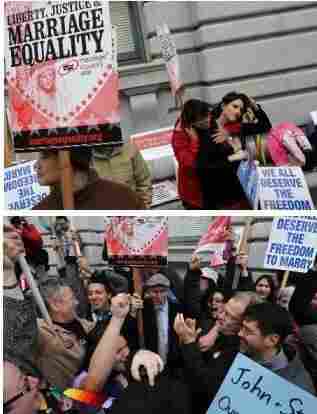 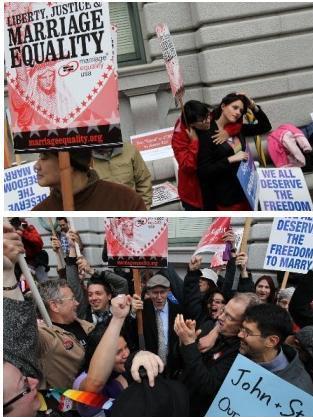 We posted updates on the decision (which you can read below) and as reaction came in.

"The National Organization For Marriage, the main group supporting Proposition 8, has condemned the ruling. From the press release:

" 'As sweeping and wrong-headed as this decision is, it nonetheless was as predictable as the outcome of a Harlem Globetrotters exhibition game,' said Brian Brown, NOM's president. 'We have anticipated this outcome since the moment San Francisco Judge Vaughn Walker's first hearing in the case. Now we have the field cleared to take this issue to the US Supreme Court, where we have every confidence we will prevail.' "

We've put a copy of the court's decision here. To read it in the box below, just click on the headline "Prop 8 Ruling" so it will pop up into a larger view.

Rep. Nancy Pelosi of California, the top Democrat in the House, says on her Twitter page that Prop 8 was ruled to be "what we knew it to be: unconstitutional. Victory for equality & CA families!"

In the decision, the judges write that they did not rule on the "broader" issue of whether "same-sex couples may ever be denied the right to marry." That, they said, "is currently a matter of great debate in our nation, and an issue over which people of good will may disagree, sometimes strongly."

They continued: "We need not and do not answer the broader question in this case, however, because California had already extended to committed same-sex couples both the incidents of marriage and the official designation of 'marriage,' and Proposition 8's only effect was to take away that important and legally significant designation, while leaving in place all of its incidents. This unique and strictly limited effect of Proposition 8 allows us to address the amendment's constitutionality on narrow grounds."

"Although the Constitution permits communities to enact most laws they believe to be desirable," the opinion states, "it requires that there be at least a legitimate reason for the passage of a law that treats different classes of people differently. There was no such reason that Proposition 8 could have been enacted."

The Los Angeles Times writes that:

"The 2-1 decision ... found that Proposition 8, the 2008 ballot measure that limited marriage to one man and one woman, violated the U.S. Constitution. The architects of Prop. 8 have vowed to appeal.

"The ruling was narrow and likely to be limited to California.

" 'Proposition 8 served no purpose, and had no effect, other than to lessen the status and human dignity of gays and lesbians in California,' the court said."

KPCC reminds us that:

"The Ninth Circuit ruling comes 18 months after federal judge Vaughn Walker struck down the ban. Walker found Prop 8 violated constitutional rights under two provisions: the equal protection clause and the due process clause of the constitution to marry."

KQED has a timeline of significant moments in California's same-sex marriage debate. And it is live blogging the news here.

As NPR's Richard Gonzales reported in November, Prop 8 was:

"Struck down as unconstitutional by a federal judge more than a year ago. Both former governor Arnold Schwarzenegger and then attorney general Jerry Brown took the unusual position of declining to appeal, so the sponsors of Prop 8 took it upon themselves to file an appeal before the U.S. 9th Circuit Court of Appeals. ...

"Regardless of the finding, the 9th Circuit is expected by all parties to be just a legal stop before the matter goes to the U.S. Supreme Court."