Accessibility links
Report: Data Show No 'Upsurge In Muslim-American Terrorism' : The Two-Way According to a University of North Carolina researcher, "20 Muslim-Americans were indicted for violent terrorist plots in 2011, down from 26 the year before, bringing the total since 9/11 to 193, or just under 20 per year." 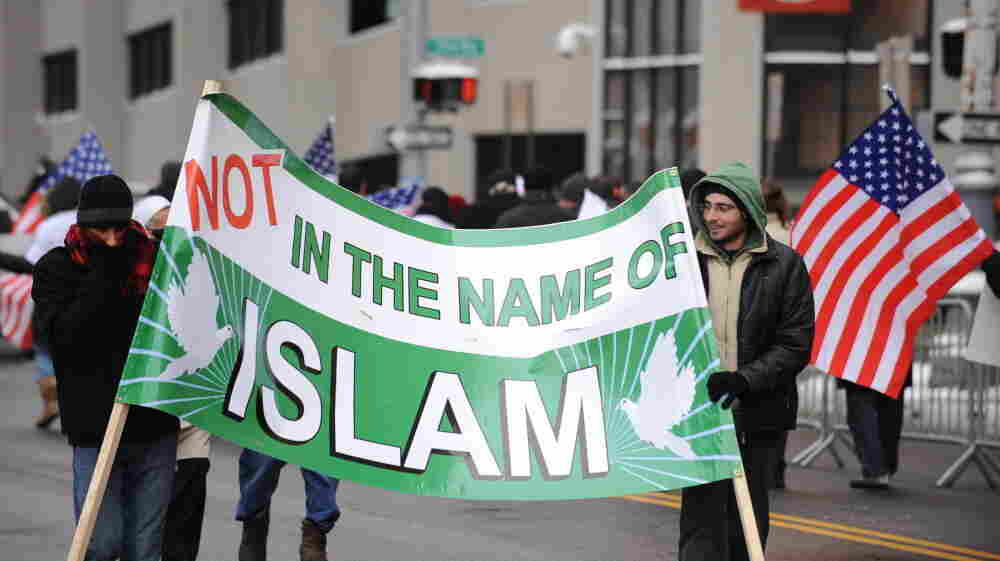 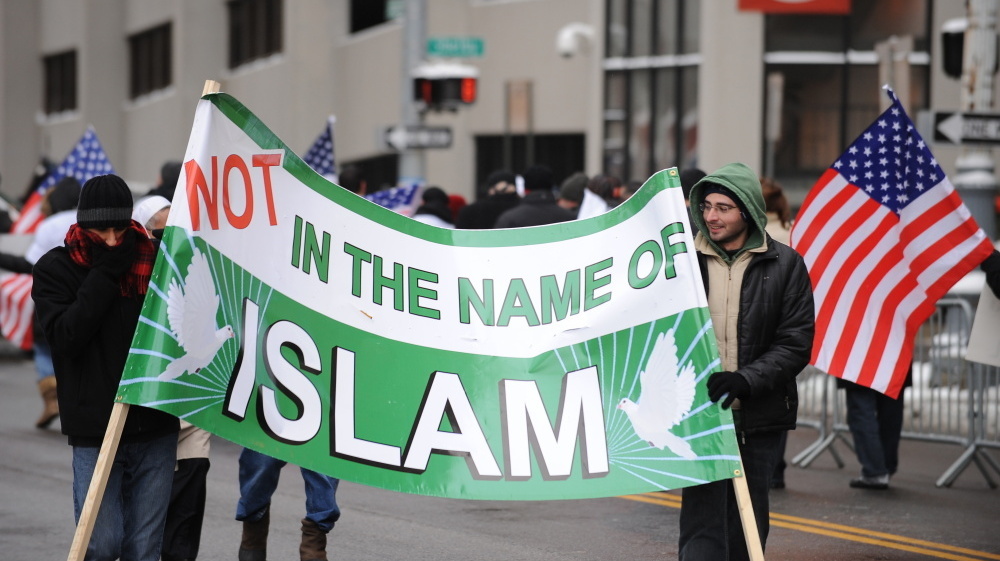 January 2010: Muslim-Americans protest against terrorism outside a federal court building in Detroit, where "Christmas Day" bomber Umar Farouk Abdulmutallab was being arraigned.

There was a decline last year in the already "small" number of Muslim-Americans indicted for violent terrorist plots and the rate of radicalization among that group remains "far less than many feared" after the Sept. 11 terrorist attacks, a researcher at North Carolina's Triangle Center on Terrorism and Homeland Security reports today.

According to University of North Carolina sociology professor Charles Kurzman, who has been studying and reporting about such statistics the past three years, "20 Muslim-Americans were indicted for violent terrorist plots in 2011, down from 26 the year before, bringing the total since 9/11 to 193, or just under 20 per year."

His latest study also concludes that "the number of Muslim-Americans indicted for support of terrorism — financing, false statements, and other connections with terrorist plots and organizations, aside from violent plots — fell from 27 individuals in 2010 to 8 in 2011, bringing the total to 462 since 9/11."

"The limited scale of Muslim-American terrorism in 2011 runs counter to the fears that many Americans shared in the days and months after 9/11, that domestic Muslim-American terrorism would escalate. [A] spike in terrorism cases in 2009 renewed these concerns, as have repeated warnings from U.S. government officials about a possible surge in homegrown Islamic terrorism. The predicted surge has not materialized."

Cases increased sharply in 2009, Kurzman has previously reported, because of 17 Somali-Americans were indicted on various terrorism-related charges. In 2010 there was one indictment of a Somali-American. In 2011, there were none.

That year also brought the killing of 13 people at Fort Hood, Texas. Army psychiatrist Maj. Nidal Hasan, who authorities say had become a radical Muslim, is to go on trial for the killings in June.