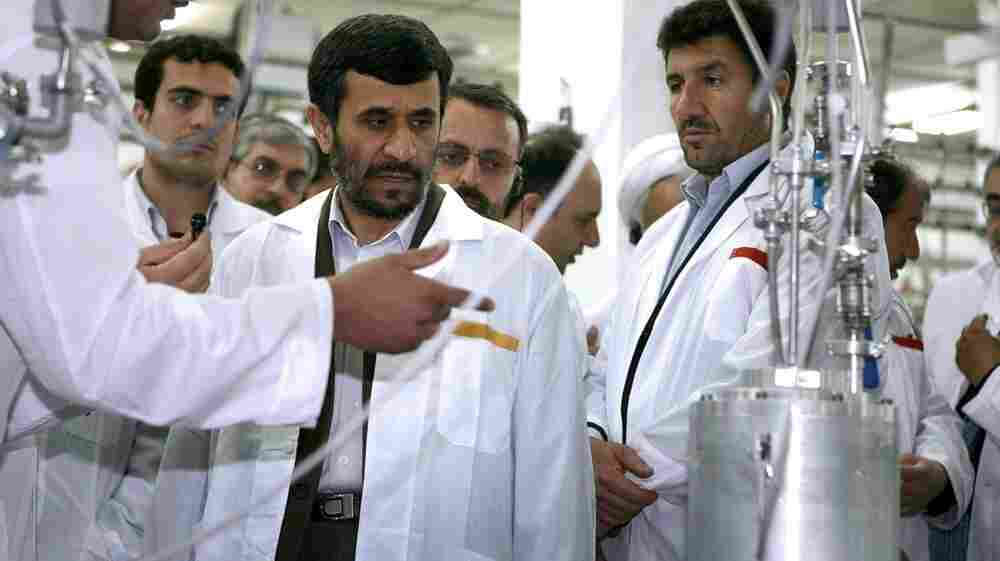 Despite international pressure, Iranian President Mahmoud Ahmadinejad listens to a technician during a visit to the Natanz Uranium Enrichment Facility, 200 miles south of the capital, Tehran, in 2008. Iranian President's Office/AP hide caption 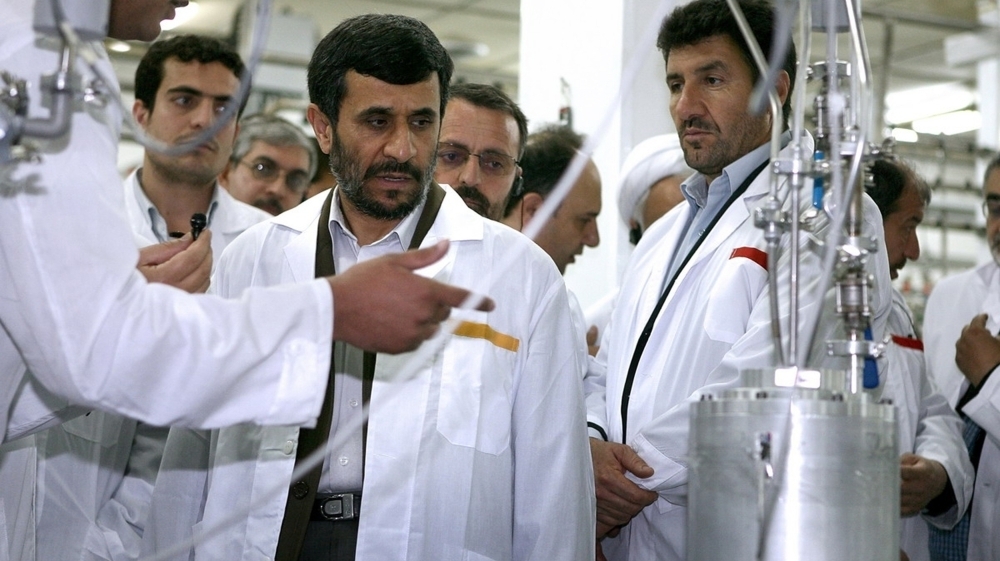 Despite international pressure, Iranian President Mahmoud Ahmadinejad listens to a technician during a visit to the Natanz Uranium Enrichment Facility, 200 miles south of the capital, Tehran, in 2008.

Press TV adds: "Iran says it will only sell oil to those European companies that agree to strike long-term agreements and guarantee payment."

The AP and Reuters are reporting that President Ahmadinejad just made the announcement that the Tehran reactor has been loaded with domestically produced nuclear fuel rods.

Reuters reports that state TV showed Ahmadinejad himself "inserted the first Iranian-made rod into the reactor in northern Tehran."

After Tehran issued its threats, the price of oil jumped. The AP reports:

"Stopping Iranian shipments means European refineries will have to find new sources of oil sooner than expected. The European Union, which buys about 18 percent of Iran's total crude exports, had planned to embargo Iranian oil this summer to pressure the country to abandon its nuclear program."

Quoting the official news agency, The New York Times reports that Ahmadinejad will likely "proclaim that a new uranium enrichment plant built inside a mountain near the holy city of Qum was 'fully operational.'"

"The announcement appeared timed to convey the defiant message that the increasingly harsh Western economic sanctions imposed on Iran were having no effect on the government's determination to proceed with its nuclear program. The United States, Europe and Israel have all called the program a cover for Iranian efforts to develop nuclear weapons capability, an accusation that Iran denies.

"The new uranium enrichment plant, known as Fordo, has raised Western concerns because it is buried deep underground, making it more impervious to scrutiny. The Fordo plant also has elevated distrust of Iran because the plant's construction had been kept a secret until Western intelligence confirmation of its existence forced the Iranians to acknowledge the plant in September 2009, just as President Obama and European allies were announcing it. The Iranians said at the time that they had always intended to reveal the plant's existence."

The BBC reports that senior national security official Ali Baqeri noted that Iran will also load Iranian-made nuclear fuel rods into the Tehran Research Reactor. The BBC makes much the same point as the Times: About two years ago talks to provide Iran with rods for the reactor collapsed and this announcement was likely meant to send the West a message that the sanctions will not deter Iran from trying to "master nuclear technology on its own."

Now, it's important to note that announcements of this kind by Iran have in the past amounted to empty boasts.

Also of note is that Iran is set to meet with the International Atomic Energy Agency in Tehran on Feb. 20 and 21. Reuters reports that the IAEA has been working its diplomatic channels to try to convince Tehran to be more transparent about its nuclear activity.