Accessibility links
Drinking Takes Center Stage As London Prepares For Olympic Spotlight : The Two-Way Britain has a drinking problem. And it's not just a question of alcoholism, but how the country should grapple with what some call an ingrained tradition, and others call a $4.24 billion nightmare. That's how much the National Health Service says it pays each year in alcohol-related incidents. 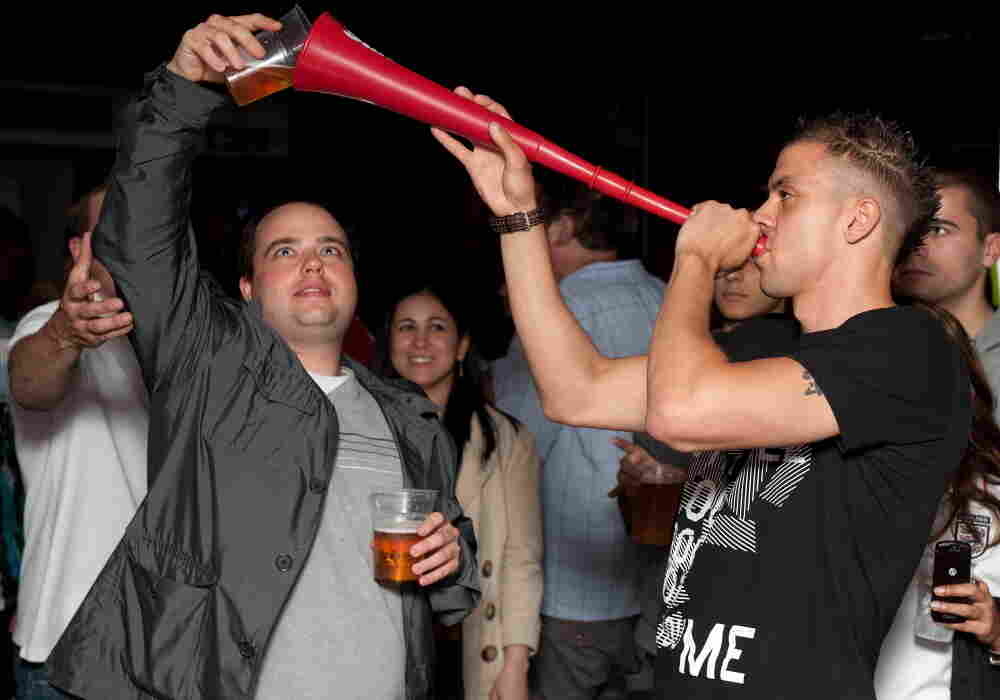 Prime Minister David Cameron calls binge drinking "one of the scandals of our society." Here, a man drinks a pint of beer through a makeshift "Vuvuzela of Ale" in London, in a file photo from 2010. Leon Neal/AFP/Getty Images hide caption 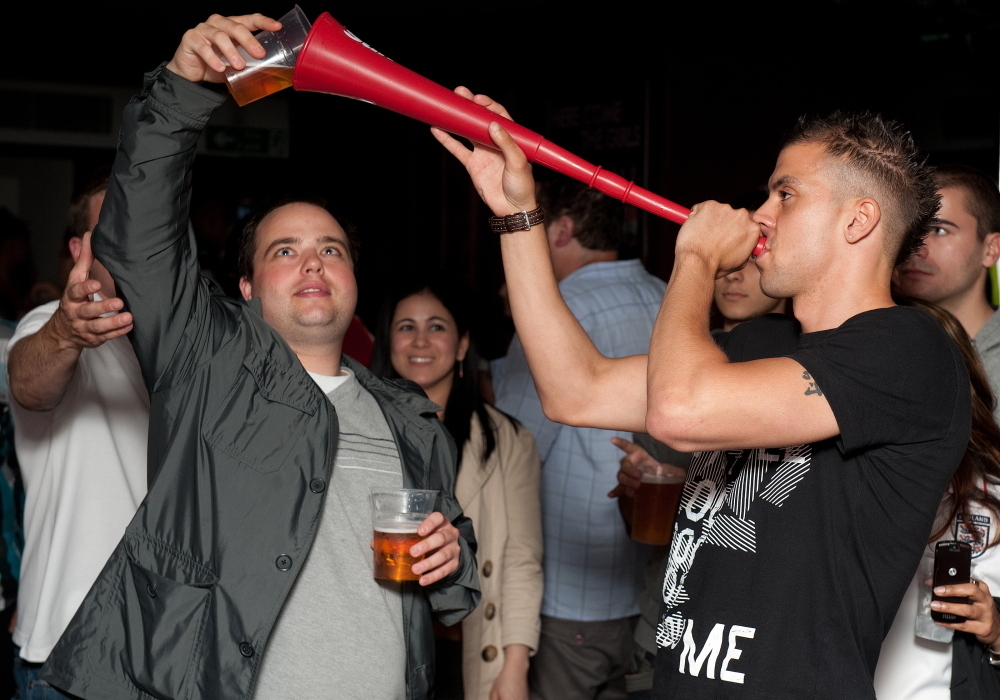 Prime Minister David Cameron calls binge drinking "one of the scandals of our society." Here, a man drinks a pint of beer through a makeshift "Vuvuzela of Ale" in London, in a file photo from 2010.

Britain has a drinking problem. And it's not just a question of alcoholism, but how the country should grapple with what some call an ingrained tradition and others call a $4.24 billion nightmare. That's how much the National Health Service says it pays each year in alcohol-related incidents.

That figure was cited by Prime Minister David Cameron Wednesday, as he pledged to rid his country of "one of the scandals of our society." One of his answers to that problem is to send "booze buses" to rove the streets in areas known for heavy drinking. The buses would ferry paramedics to where people need help.

Cameron is also expected to signal his willingness to adopt a system of minimum prices for alcohol, something that would escalate his government's effort to get Britons to drink less.

Raising the cost of booze is a hot issue — an article about that possibility drew impassioned responses from readers on The Guardian's site, some of them unprintable here. One highly recommended comment: "Who can blame the desperately poor wanting to get off their faces on cheap booze, it's not like there is a lot for them to look forward to is there?"

From the BBC's site, here's one reader's thoughts (out of more than 1,000 comments):

"We seem to be moving towards prohibitions. Good move, that worked so well in the past for curbing alcohol related crime."

"Raise the prices and there will be a market to exploit followed by people shipping cheap booze in from abroad, or simply distilling it themselves."
"People will always find a way to get what they want so perhaps we should try to offer them an alternative."

The issue of how much alcoholic drinks should cost has gained particular prominence as London prepares to host the 2012 Summer Olympics, which begin in late July.

Retailers claim that foreign visitors are in for a rude surprise if they come to Britain for the Games, as they "will be paying 50 percent more for a bottle of wine than they would do so in their own countries, according to the Wine and Spirit Trade Association."

The higher price would come via the country's "alcohol tax escalator," which is scheduled to put a 7.2 percent tax increase in place next month. Retailers are pushing for a postponement, noting that "duty and VAT already account for three-quarters of the average price of a bottle of vodka and half the price of a bottle of wine."

One prickly question is whether the government should mandate minimum prices for alcoholic drinks. Scotland has shown a willingness to move in that direction, but hasn't set a price yet. The proposed rate is 45 pence (about 70 cents) per alcohol unit.

You can see what Scotland's new, higher prices might look like at the government's webpage. One example: a four-pack of 440-ml lager beer — or about 60 ounces of beer — would go from costing $4.71 to costing $6.20, using today's exchange rates.

There's dissension in Cameron's own government over trying to use higher prices as leverage to cut drinking. As Sarah Boseley writes in The Guardian, Cameron has split with health secretary Andrew Lansley, who has previously sided with the alcohol industry to say that minimum prices aren't the answer. The secretary's stance led several prominent health groups to reject a potential deal brokered by Lansley last year.

Of course, the controversy over Britain's relationship with drinking isn't a new one — in 2006, a book called Binge Britain: Alcohol and the National Response drew widespread attention.

And in 2009, a Polish photographer named Maciej Dakowicz published four years' worth of images he'd captured at night, on the streets of Cardiff.

As the U.K.'s Daily Mail reported back then, "Maciej has travelled to over 20 countries but says he has never encountered anything like the scenes he recorded here."

Regardless of what policy changes will be made, it's uncertain what effect they can have on the national psyche. After all, when London Olympics organizers sought to put Londoners' concerns about traffic and congestion to rest last month, they suggested the city's residents stagger their commute — by having a beer. As the AP reported:

"If office workers do things as simple as stopping and have a beer on their way home, it will spread out the rush-hour demands, they assert. No recommendations — alcoholic or otherwise — were made for the morning commute."