Accessibility links
Audits Are Under Way At Apple Supplier Foxconn's Plants : The Two-Way Audits of working conditions are under way at Foxconn's manufacturing plants in China, a key link in Apple's supply chain of iPhones, iPads and other devices. The effort will include visits to at least three sites, "each with more than 100,000 workers," says Auret Van Heerden of the Fair Labor Association. 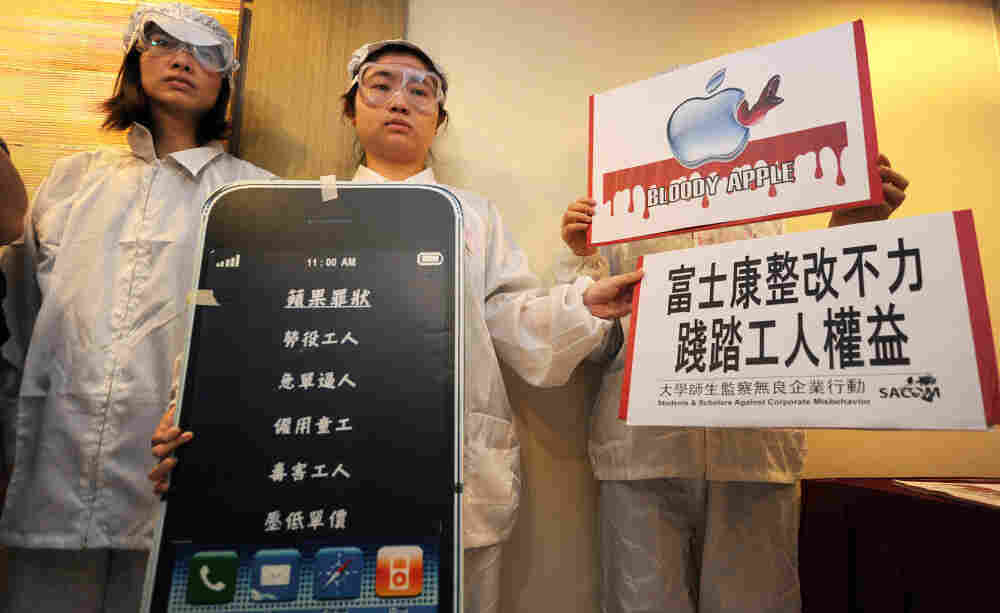 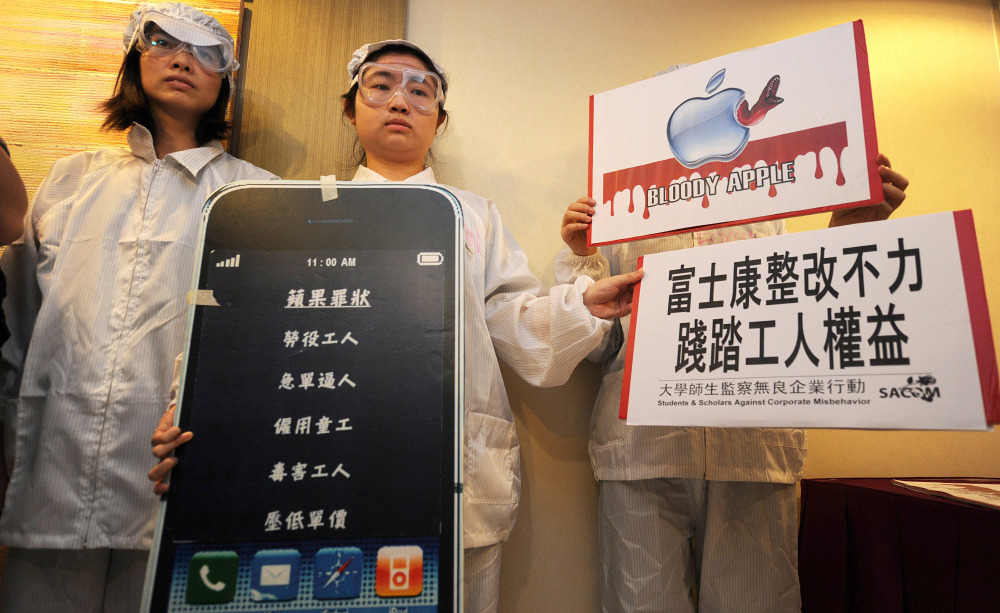 A group of protesters demonstrate outside Foxconn's annual meeting in Hong Kong last year. Working conditions at the company's plants have brought criticism on Apple.

Audits of working conditions are under way at Foxconn's manufacturing plants in China, a key link in Apple's supply chain of iPhones, iPads and other devices. The effort will include visits to at least three sites, "each with more than 100,000 workers," says Auret Van Heerden, president of the Fair Labor Association.

"So we've taken a representative sample of over 35,000 workers," Van Heerden tells All Things Considered co-host Robert Siegel, in an interview airing Wednesday.

Questions about the treatment of workers at Foxconn plants first arose when a string of worker suicides, resulting in more than a dozen deaths, were reported in 2010.

The issue arose again in January, when monologue artist Mike Daisey — a self-described Apple fan, who traveled to China to learn more about Foxconn's employees — was featured in an episode of This American Life. And then at the end of January, The New York Times ran a series of articles about Foxconn and its employees.

Together, those stories portrayed a company whose plants were staffed by severely overworked employees, in environments that often ignored 60-hour-workweek limits.

To conduct its study, Van Heerden says his group is using technology that should be familiar to some of the workers: an iPad.

"The data is automatically uploaded to the Cloud," he says, "so there's no way that the data can be linked back to any worker."

When asked if he has noticed any progress in China's labor laws and working conditions during the past 10 years, Van Heerden tells Robert that workers have one advantage in high-intensity labor markets like that in Shenzhen, where jobs in the area are plentiful.

"It's a sellers' market," he says, "and workers change jobs readily, because they hear of better conditions somewhere else. And they know that they can get a job very easily."

And the workers have another ally, according to Van Heerden: the Chinese government.

"In the last 18 months, they've adopted a number of major laws which regulate the labor market," he says. "I just had a Chinese government official explaining to us today, that they are not interested in the low-wage, low-skill, low-profit-margin version of development. They want a high-wage, high-skill, high-margin development path."

The Fair Labor Association has come under criticism of its own, as some accuse the group of being too close to companies it is meant to monitor.

Van Heerden says his group takes two measures to keep it honest. First, he says, "the board is made up of equal representatives of companies, universities, and NGOs (non-government organizations)."

"But the second is the more important protection," he says. "It's that we publish our results" — a step that opens the group to criticism if it strays from its mission, or glosses over potential problems.