Accessibility links
U.S. General Apologizes To 'Noble People Of Afghanistan' For Quran Burnings : The Two-Way In a video that underscores how seriously the U.S. military and NATO are taking the incident, the commander of international forces today apologizes four times for what he says was the improper disposal of Qurans at Bagram Air Field north of Kabul. 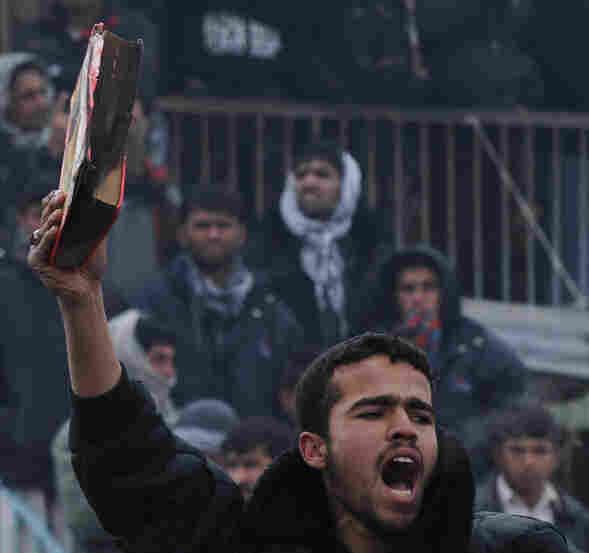 An Afghan demonstrator holds a copy of a half-burnt Quran, allegedly set on fire by soldiers at Bagram Air Field, during a protest outside the base today. Massoud Hossaini /AFP/Getty Images hide caption 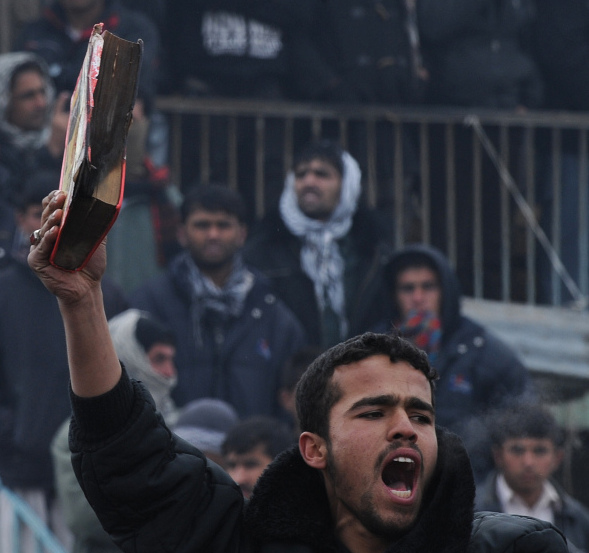 An Afghan demonstrator holds a copy of a half-burnt Quran, allegedly set on fire by soldiers at Bagram Air Field, during a protest outside the base today.

In a video that underscores how seriously the U.S. military and NATO are taking something that profoundly offends Muslims, the commander of international forces in Afghanistan today apologizes four times for what he says was the improper disposal — burning, apparently — of Qurans and other Islamic religious materials at Bagram Air Field north of Kabul.

Word of what U.S. Gen. John Allen says was the unintentional actions of some International Security Assistance Force troops on the base led to a protest today by more than 2,000 angry Afghans outside the air field, The Associated Press reports. The wire service says that some protesters shouted "die, die foreigners!" and fired shots into the air.

During his 90-second video message, which the BBC says has been played repeatedly on Afghan TV today, Allen says:

-- An investigation has begun.

-- Such actions have been stopped.

-- He has ordered "this does not ever happen again."

According to the AP, Ahmad Zaki Zahed, chief of a provincial council in the area:

"Said five Afghans working at [a fire] pit told him that the religious books were in the garbage that two soldiers with the U.S.-led coalition transported to the pit in a truck late Monday night. When they realized the books were in the trash, the laborers quickly worked to recover them, he said.

" 'The laborers there showed me how their fingers were burned when they took the books out of the fire,' he said."

As for how a Quran or other holy books that are no longer usable can be disposed of without causing offense, we see many references (including here and here) to burial.

Meanwhile, two other Afghanistan-related stories are worth noting this morning:

-- "Afghanistan To Spy On Its Soldiers." According to The Wall Street Journal, "Afghanistan is rolling out an ambitious plan to spy on its own soldiers, the most serious attempt so far to halt a string of attacks by Afghan troops on their Western comrades-in-arms, according to Afghan and American military leaders."

-- "The Man Who Retrieves The Taliban's Dead." The Washington Post profiles Abdul Hakim, who in one southern province has become "the man who can retrieve insurgents' bodies from American and Afghan authorities and return them to their families and comrades."