Accessibility links
Rami Al-Sayed, Syrian Citizen Journalist, Is Killed During Attack On Homs : The Two-Way Al-Sayed was live-streaming the shelling of Homs when all of a sudden the stream went quiet. The last video posted to al-Sayed's Youtube page was of his body in a makeshift hospital.

Early this morning the bombardment of Homs was streamed live to the web by a citizen journalist. But as the forces loyal to Bashar Assad continued their attack on the restive city, the stream went quiet and never came back again.

Rami al-Sayed, the man who kept that live stream, was injured during the shelling on Bab Amr today. After bleeding for hours, he succumbed to his wounds. The last video on his YouTube channel, uploaded by his brother, shows al-Sayed's body in a makeshift hospital:

Dr. Mohammad al-Mohammd, who appears speaking in the video above, described al-Sayed as one of the best videographers and journalists they had in Bab Amr.

His cousin Basil al-Sayed, another citizen journalist from Homs, was killed in December. Activists said that today, 100 people were killed in Homs. The U.N. estimates that government forces killed at least 5,400 people last year.

According to live-streaming site Bambuser that hosted al-Sayed's videos, he was 26 and has an 18-month-old daughter named Maryam. The site published the last message he sent to his friends before he died:

"Babaamr is facing a genocide right now. I will never forgive you for your silence. You all have just give us your words but we need actions. However our hearts will always be with those who risk their life for our freedom. I know what we need! We need campaigns everywhere inside Syria and outside Syria, and now we need all people in front of all embassies all over the world. In a few hours there will be NO place called BabaAmr and I expect this will be my last message and no one will forgive you who talked but didn't act."

International media have had very limited access to Syria since a popular uprising began in the country 10 months ago, and citizens journalists like al-Sayed have played an important role in getting information to the outside world. He has uploaded more than 800 videos to his YouTube channel and kept a live video stream broadcasting from Homs even when the city was being shelled heavily by government security forces. 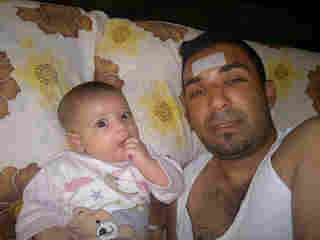 "Rami Al Sayid's death has shocked us all," activist Rami Jarah said on Twitter, "he was an amazing activist who risked his life to show us the world he lived in."

At the end of the video above, his brother can be seen saying his goodbye.

"I pray to God to accept you as a martyr," his brother says before kissing his body one last time.