Accessibility links
From War Correspondents In Libya, A Toast To Fallen Comrades In Syria : The Two-Way Seasoned combat reporters gathered in Tripoli on Wednesday to honor Marie Colvin, a friend and fellow journalist who was killed earlier that day in Syria. And they remembered others who have died. 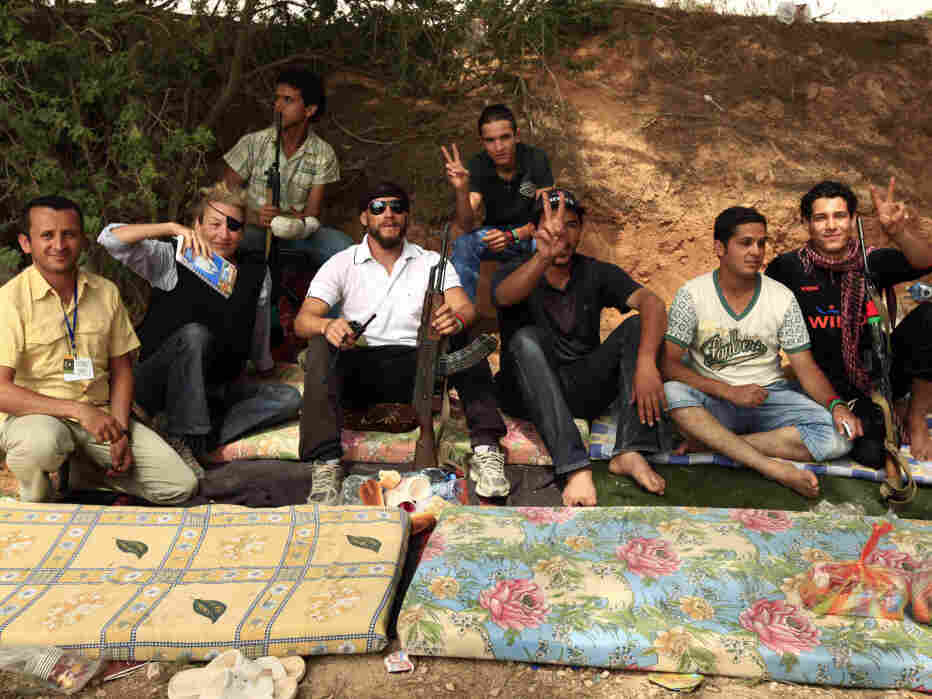 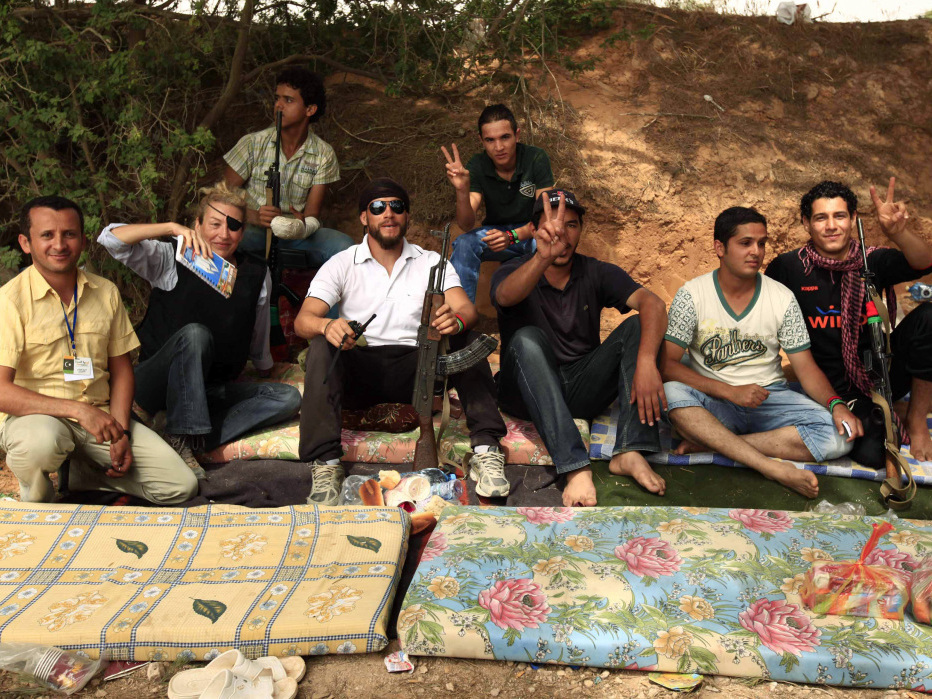 Journalist Marie Colvin (second from left) poses with Libyan rebels in Misrata on June 4, 2011. She was killed in the besieged Syrian city of Homs on Wednesday. Later that day in Tripoli, fellow war correspondents gathered to remember her.

We arrived nearly an hour late, our taxi drivers lost in the potholed, half-flooded streets of Tripoli. Our Libyan host, who would never have fathomed an on-time start anyway, invited us upstairs, where he had managed to arrange an impressive array of hors d'oeuvres and beverages on such short notice.

People arrived in groups of three or four at a time. Everyone knew almost everyone else. They hugged each other as if it could be their last time, struggled to hold back the tears, occasionally finding a way to evince a smile from each other.

It was a family reunion of sorts: nearly 20 of the most seasoned combat reporters, photographers, and NGO staff in Libya. Every one of them had been under the worst fire imaginable at one point or another during the revolution. Many of them had been detained, sometimes for weeks; others beaten. Some both. All of them had lost friends over the last year, both Libyans and from the West. And last night, they gathered to honor friends and colleagues who had just died in Syria. I was grateful to be able to bring them together.

Earlier that day, veteran war reporter Marie Colvin and award-winning photographer Remi Ochlik were killed in a devastating attack on a building that had become a media center in Homs, Syria. They weren't even the first deaths from the journalism community that day; a few hours earlier, an intrepid citizen journalist known in video streaming circles as Syria Pioneer was killed in the same area. And less than a week earlier, Pulitzer Prize-winning reporter Anthony Shadid died while trying to cross the border out of Syria.

Everyone in the room had stories to tell, especially about Marie. They'd slept on dirt floors with her, talked their way through militia checkpoints, dodged shelling for hours on end, and shared the occasional drink during their time together in Libya last year. Marie had even posted a message on a private Facebook group we are all members of, barely 12 hours before she died, about a devastating story she'd written a couple days earlier about the suffering of civilians in the Baba Amr neighborhood in the Syrian city of Homs.

"If anyone can figure out how to climb over Sunday Times paywall (I can barely do it myself) please post ... my Baba Amr, Homs story in February 19 issue. I will face the firing squad for you. I'm still in Baba Amr, technically challenged. I don't often do this but it is sickening what is happening here."

[That story is now available here.]

Marie chatted with members of the group for a bit, then she went back to work. A few hours later, she was dead.

After about 90 minutes of chatting and distracting ourselves as best we could, someone stood up and said it was time for a toast. We all stood in a circle, our glasses raised.

No one knew what to say.

"Perhaps a moment of silence would be appropriate," one reporter suggested.

We stood there for a while, remembering, praying, soul-searching. First names began flying through my head, not just the ones who died this past week, but others who passed in the line of duty. Tim, Chris, Anton, Ali, Mohamed, all in Libya last year; Gilles, Basil and countless citizen journalists in Syria, many whose real names we may never know.

Someone finally broke the silence, raising his glass. "To Marie," he said.

"To Marie," we responded in unison.

More silence, then someone whispered something to another person, causing them to chuckle. As if it were a signal, the rest of us went back to our conversations, laughing, smoking, eating, drinking — whatever it took to get through this evening without completely losing it.

Somewhere between 1 and 2 a.m. the group began to break up. "Try not to get detained while going home" was the typical goodbye.

It had been an incomparably awful week for reporters covering the Arab uprisings, but the few hours everyone had together last night in Tripoli made it just a little easier to cope. In just a few hours, the sun would rise. And everyone would go back to doing the jobs that they love — and Marie loved — so much.