Accessibility links
Gadhafi's Compound Slowly Being Erased From History : The Two-Way When Moammar Gadhafi ruled Libya, no one imagined stepping foot in Bab al-Azizia, but now it's a reminder of his iron rule that is slowly being dismantled. 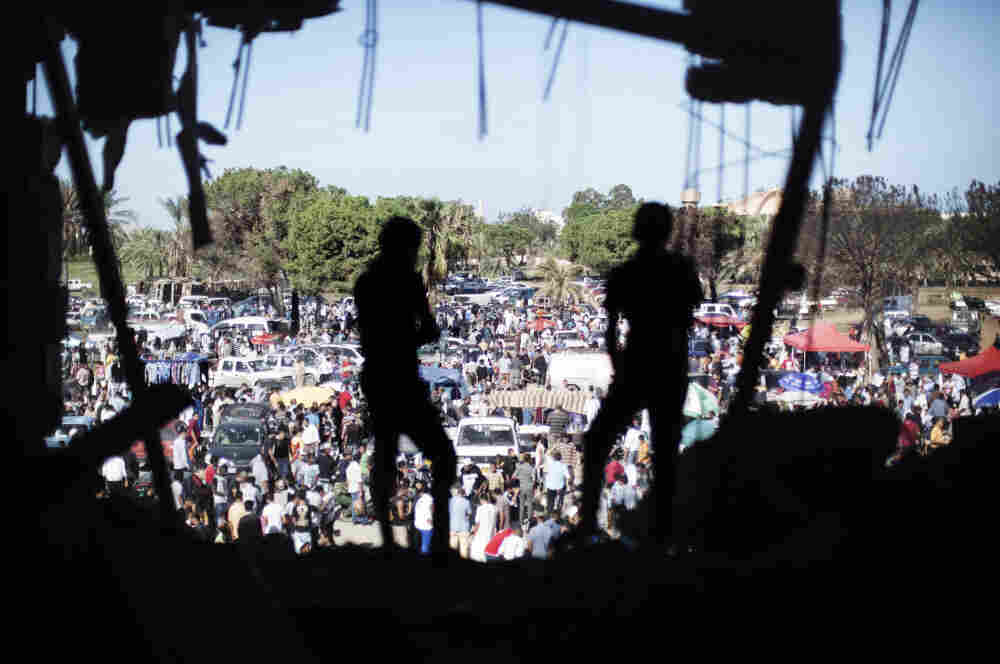 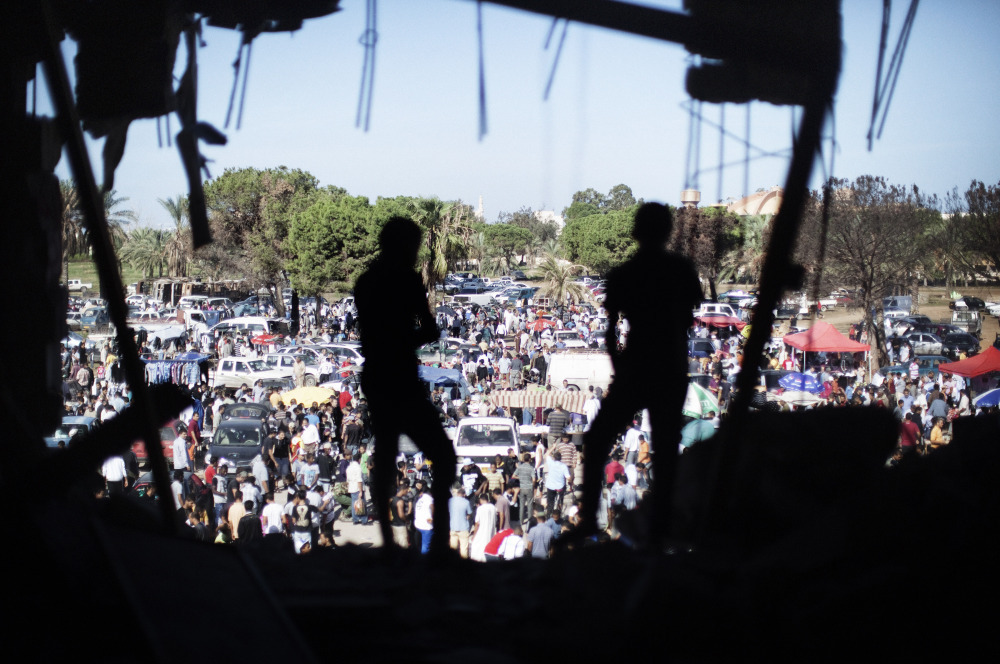 Libyans attend the Friday market the gardens inside the Bab al-Azizia compound in Tripoli, on Oct. 28, 2011.

"I don't know why the traffic is like this," he said. "It's Friday just before prayers; where are all these people going?"

My friend Emad and I had been driving around the perimeter of Bab al-Azizia, Gadhafi's notorious compound just outside downtown Tripoli. It was here that NATO concentrated many of its bombing runs, as did President Reagan in the 1980s. Now the outer walls are a crumbling mess, covered with anti-Gadhafi graffiti.

It probably would have been faster for us to walk than drive at this point, but there was still nowhere to park. As we slowly moved forward, we saw men and women walking in our direction with plastic bags full of produce and household items.

"This must be the new souk they've been talking about," Emad said.

Eventually we reached a traffic circle that once marked the visitors entrance to the compound. Before the liberation of Tripoli, if you stopped your car here or even just loitered outside, you would've been shot on the spot. Now the Libyan people reclaimed the space, converting it into a Friday market.

After parking just past the traffic circle, we walked to the market. The traffic circle itself was a bustling bazaar swarming with people, mostly men. When the wind would shift, smoke would get in your eyes, bringing along with it the scent of roasting chicken.

Emad and I headed in the other direction, towards the compound entrance, where more men were hawking their wares: blood oranges, mufflers, computer components, socks, bird cages (with and without occupants), bags of cilantro, used children's toys - you name it. Occasionally you'd see ornate mirrors, door frames and brass fittings.

"They took those from inside Bab al–Azizia," Emad remarked.

Climbing over a concrete barrier, we entered another world. Everywhere ahead of us was debris, mostly concrete, as well as bits and pieces of infrastructure like pipes, insulation and electric wires. Bags of trash were everywhere – some of it from the time of the revolution, the rest of it more recent. The place reeked of rotting fruit.

I'd always known the Gadhafi compound was big, but now it suddenly felt immense, as if Central Park had been stripped of vegetation, air-dropped into Tripoli and filled with the detritus of war. Many buildings were half-demolished, the victim of NATO airstrikes. Others have been targeted more recently by Libyan militias in an attempt to reduce the entire compound to rubble.

Wherever you walked, there were bits and pieces to remind you that this was a place where people lived and worked. Broken mirrors, shattered televisions, rusty tins of tuna, door knobs, bits of clothing. In one pile I saw what looked like a prayer rug sticking out of a pile of concrete. It smelled terrible. I dusted it off and noticed a familiar face staring back at me.

"Yes, that is Gadhafi," Emad said. "But as a younger man. And you get two Gadhafis for the price of one – he's on the other side of the rug, too."

At first I couldn't believe that something like this could still be found at Bab Al-Azazia, as people had carted away pretty much anything that hadn't been bolted to the floor. Then again, this was a face they encountered dozens of times a day of the course of 42 years. An image of their former leader is the last thing a Libyan would want to take home – except perhaps as a door mat.

I pointed to a collapsed structure to our right. "Was that building hit by a NATO strike?" I asked Emad.

"Oh, no, no, no," he replied. "That was from when your President Reagan went after Gadhafi in the 1980s. Gadhafi never cleaned it up, and would show the destroyed building to dignitaries who visited him."

At the top of a small hill, we reached a green corrugated gate. "No one could enter here," Emad said. "Even very important people. This was for Gadhafi and his guests only."

Through the gate, down the other side of the hill, was a multi-level villa that jutted out in all sorts of directions. It was as if Gadhafi had briefly recalled a picture of Frank Lloyd Wright's Falling Water and ordered a terrified architect to re-create it on the spot. Whoever actually built it, no doubt it was to Gaddafi's exact specifications, as this was his primary residence at the compound.

The gate outside the villa must have been constructed out of wood, as there were carbonized beams littered everywhere. The house had been entirely sacked. Even though barely six months have passed since Libyan opposition fighters liberated Tripoli, the interior of the house looked like an abandoned ruin from decades ago. Charred walls, trash, graffiti, debris – no room avoided the people's wrath. The smell was overpowering, a mix of charred wood and melted plastic. I craved fresh air.

Exiting the building, we saw more graffiti. Most of it was in Arabic, but occasionally you would see messages like "Viva Libya." There were also symbols drawn on the walls, the most common of which was the symbol of the Amazigh people, known more commonly in the west as Berbers. The Amazigh had been oppressed by Gadhafi for decades, and now they too had left their mark on what was once his personal palace.

Across the way, one building remained relatively undamaged. I saw clothes lines hanging in front of them. Homeless people had moved into the compound.

"Did you ever imagine that in your lifetime that you would be able to visit inside here?" I asked Emad.

He thought long and hard. "No, I never did. I live a 10-minute walk from here and I never thought I would ever even get close to it."

"Will any of this be preserved as a museum?"

"No, I don't think so" he replied. "They are working on plans to turn this into a park."

"Isn't some of it worth preserving, for future generations of Libyans to remember their history?" I asked.

"We don't need to preserve anything. How will anyone ever forget what he did to us? This entire place should be wiped clean."