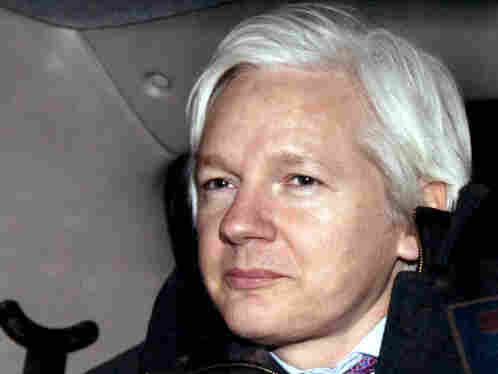 WikiLeaks founder Julian Assange is driven away in a taxi after leaving his hearing at the Supreme Court in London, Thursday, Feb. 2, 2012. Matt Dunham/AP hide caption

"The anti-secrecy group WikiLeaks began publishing on Monday more than five million emails from a U.S.-based global security analysis company that has been likened to a shadow CIA," Reuters writes.

Indeed, WikiLeaks is posting what it refers to as The Global Intelligence Files, here. It claims "they reveal the inner workings of a company that fronts as an intelligence publisher, but provides confidential intelligence services to large corporations."

Stratfor calls WikiLeaks' actions "a deplorable, unfortunate — and illegal — breach of privacy. It also claims "some of the emails may be forged or altered to include inaccuracies; some may be authentic. We will not validate either. Nor will we explain the thinking that went into them."

As Time magazine's Techland blog says, "in December 2011, members of the hacktivist collective Anonymous suggested they'd breached Texas-based intelligence and threat analysis firm Stratfor. ... The group hasn't confirmed the emails were handed off by Anonymous, but one of the hacker group's Twitter accounts offered self-plaudits this morning, hailing 'the amazing partnership between #Anonymous and #WikiLeaks to make all 5 MILLION mails public.' "

Eyder posted about the Anonymous break-in to Stratfor's servers back in December.