Accessibility links
Santorum Defends Saying JFK Speech On Religion Makes Him Sick : The Two-Way The race for the Republican presidential nomination enters another crucial week, with contests Tuesday in Arizona and Michigan. Rick Santorum is tied nationally with Mitt Romney in a new national poll of Republicans. 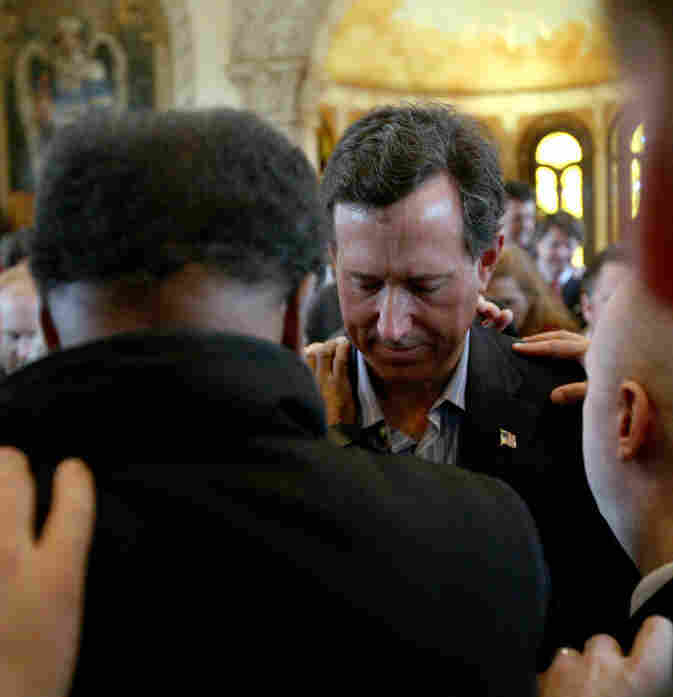 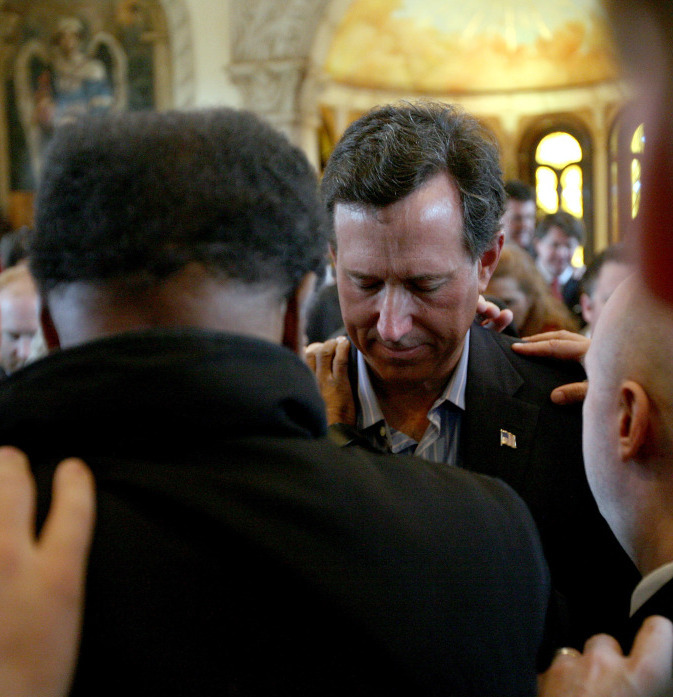 The Boston Globe writes that on Sunday:

"Santorum said his disagreement with Kennedy came from the line in Kennedy's speech that read, 'I believe in an America where the separation of church and state is absolute.'

" 'I don't believe in an America where the separation of church and state is absolute,' Santorum said ... on ABC's This Week. 'The idea that the church should have no influence or no involvement in the operation of the state is absolutely antithetical of the objectives and vision of our country.' "

A transcript of then-Sen. Kennedy's Sept. 12, 1960, address to the Greater Houston Ministerial Association is posted here at the website of the John F. Kennedy Presidential Library and Museum. You can also listen to it. Here's an excerpt, starting with Kennedy's explanation for why he felt he needed to address the subject:

"Because I am a Catholic, and no Catholic has ever been elected president, the real issues in this campaign have been obscured — perhaps deliberately, in some quarters less responsible than this. So it is apparently necessary for me to state once again — not what kind of church I believe in, for that should be important only to me — but what kind of America I believe in.

"I believe in an America where the separation of church and state is absolute --where no Catholic prelate would tell the president (should he be Catholic) how to act, and no Protestant minister would tell his parishoners for whom to vote — where no church or church school is granted any public funds or political preference — and where no man is denied public office merely because his religion differs from the president who might appoint him or the people who might elect him.

"I believe in an America that is officially neither Catholic, Protestant nor Jewish--where no public official either requests or accepts instructions on public policy from the pope, the National Council of Churches or any other ecclesiastical source — where no religious body seeks to impose its will directly or indirectly upon the general populace or the public acts of its officials — and where religious liberty is so indivisible that an act against one church is treated as an act against all."

On This Week, Santorum — a former senator from Pennsylvania and a Catholic — made the case Kennedy was arguing that people of faith have no place "in the public square." A reading of Kennedy's address, however, doesn't show the then-senator saying that.

This is another critical week for the race for the GOP presidential nomination, with primaries Tuesday in Arizona and Michigan. This morning, Politico reports that its latest national poll of Republicans shows Santorum and former Massachusetts Gov. Mitt Romney virtually tied.

Our friends at It's All Politics are following the 2012 presidential campaign here.