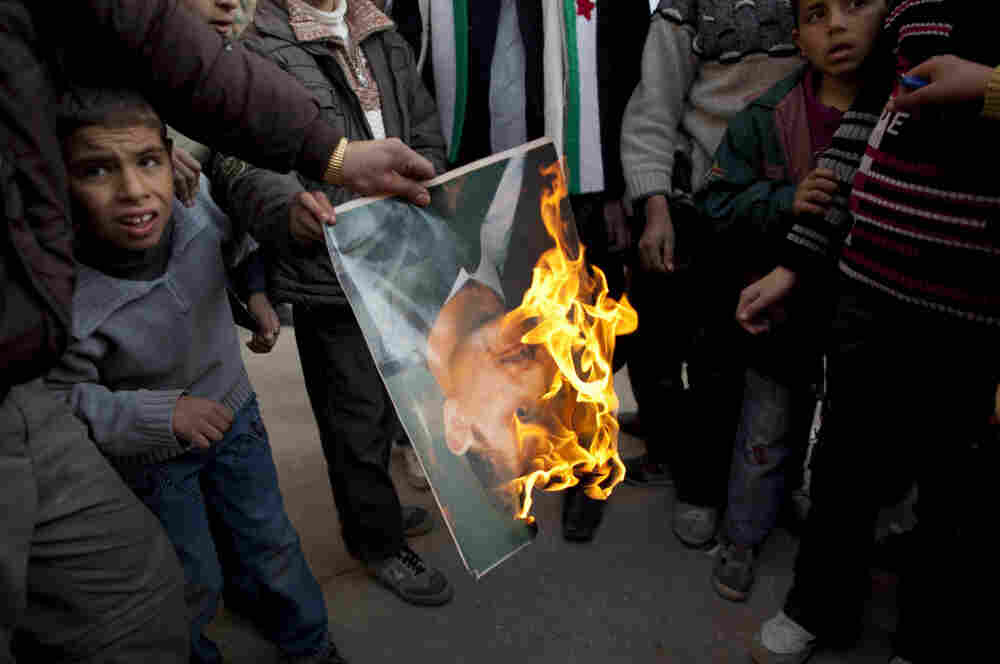 A man burns a portrait of Syrian President Bashar Assad during a demonstration on the outskirts of Idlib, northern Syria, on Sunday. Rodrigo Abd/AP hide caption 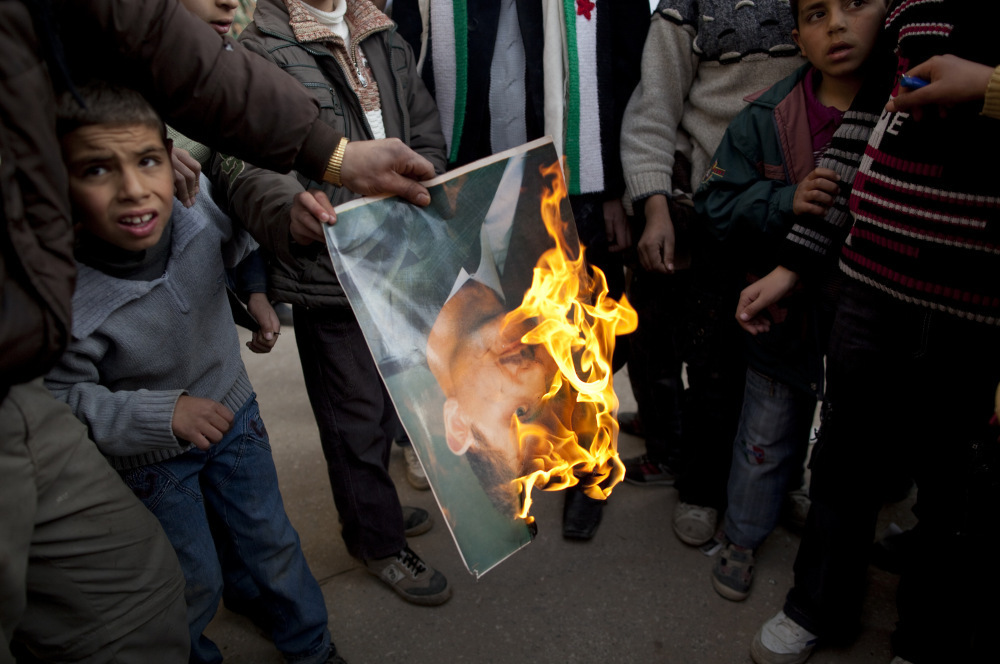 A man burns a portrait of Syrian President Bashar Assad during a demonstration on the outskirts of Idlib, northern Syria, on Sunday.

A British photojournalist hurt during the government shelling of Homs is now safe in Lebanon, his employer told Reuters.

Reuters adds that The Sunday Times said Paul Conroy was in "good shape and good spirits."

Conroy was hurt in the same incident that killed two other journalists, including his colleague Marie Colvin and Frenchman Remi Ochlik. There is no word whether French journalist Edith Bouvier, who is also hurt, is still in Syria.

The AP reports that Conroy was smuggled out of the country by Syrian rebels.

"I have heard that he is out," Conroy's wife Kate Conroy told the AP. "All I can say is that we are delighted and overjoyed at the news, but I am not going to say any more than that at this point."

And while this is a piece of good news to come out of Syria, the situation on the ground has not improved much. In fact, Syrian activists say the carnage has only gotten worse.

Here's CNN with the latest reports on deaths:

"At least 60 people, including three women and two children, were killed across Syria on Tuesday alone, said the Local Coordination Committees of Syria, a network of opposition activists.

"The deaths include 27 in Hama, where hundreds were also injured during a fifth day of shelling, the LCC said. Twenty-four others died in the opposition stronghold of Homs, which has been pummeled by government forces for more than three weeks. The deaths followed a grim day Monday, when 144 people died nationwide, the LCC said.

"Another opposition group, the Syrian Observatory for Human Rights, said five members of the Syrian army were killed in predawn clashes with defected soldiers in Daraa province."

On the diplomatic front, Voice of America reports that the U.N. Human Rights Council "is expected to support a resolution that accuses Syria of widespread human rights violations, persecution of anti-government activists and the use of heavy weapons in residential areas."

French President Nicolas Sarkozy has retracted his statement on journalist Edith Bouvier. The AP reports that Sarkozy said he had been "imprecise," when he said Bouvier was out of the country.

It is unclear whether Bouvier made it to Lebanon.

While it is not yet clear how she managed to leave the country, the AP reports that French President Nicolas Sarkozy said Edith Bouvier had been evacuated.

"I glad that this nightmare is over," Sarkozy said.