Accessibility links
Gay Marine's Kiss Was 'Four Years Of Pent-Up Emotion And Secret Love' : The Two-Way Marine Sgt. Brandon Morgan's homecoming kiss with his partner went viral after a photo was put online. For Morgan, being able to publicly express his love now that "don't ask, don't tell" is history was emotional.

When he returned from Afghanistan and saw his partner waiting to welcome him home, "four years of pent-up emotion and secret love" just seemed to naturally lead to "what felt like an eternity kiss," Marine Sgt. Brandon Morgan told NPR this afternoon. 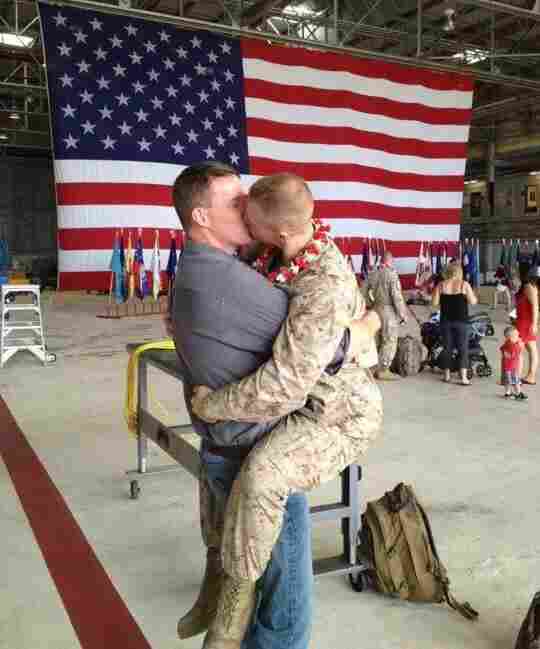 The kiss. That's Sgt. Brandon Morgan on the right. Dalan Wells on the left. Gay Marines on Facebook hide caption 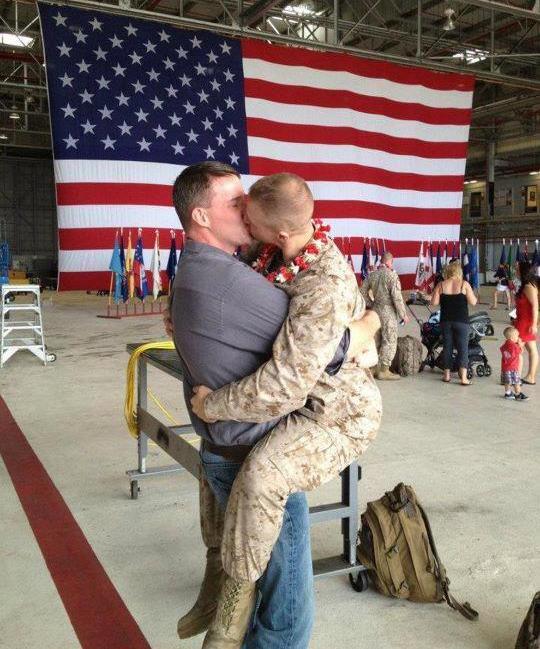 The kiss. That's Sgt. Brandon Morgan on the right. Dalan Wells on the left.

In a conversation with All Things Considered producer Art Silverman, part of which will be broadcast on the show later today, Morgan discussed the kiss and the now viral photo that we blogged about Monday.

"I looked to my left" and saw Dalan Wells, his partner, Morgan said. "My legs started going numb ... and I didn't care who was around. ... I wanted to show him how much I cared for him." They've known each other for four years.

And the post-kiss reaction sparked by the photo's posting on the Web has made him "very hopeful," Morgan said, "because even though there's been a lot of negative responses, the positive responses have been overwhelming."

The "don't ask, don't tell" policy that had barred openly gay men and women from serving in the U.S. military ended last September.