Accessibility links
Obama: There Is Still A Diplomatic Window With Iran : The Two-Way In his first press conference of the year, Obama defended his decision not to intervene militarily in Iran and Syria.

Obama: There Is Still A Diplomatic Window With Iran

Obama: There Is Still A Diplomatic Window With Iran 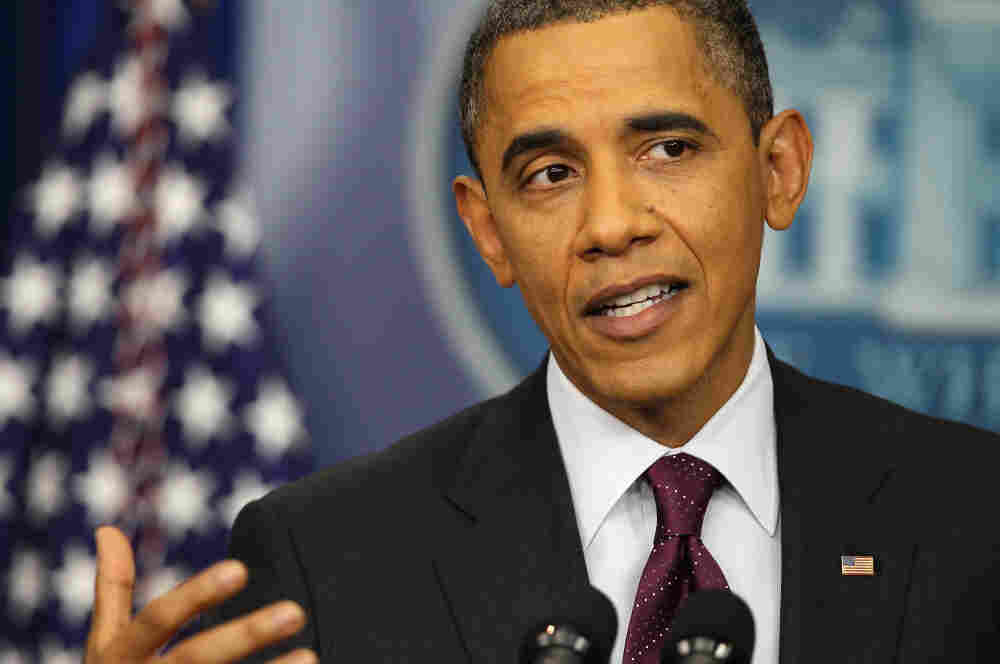 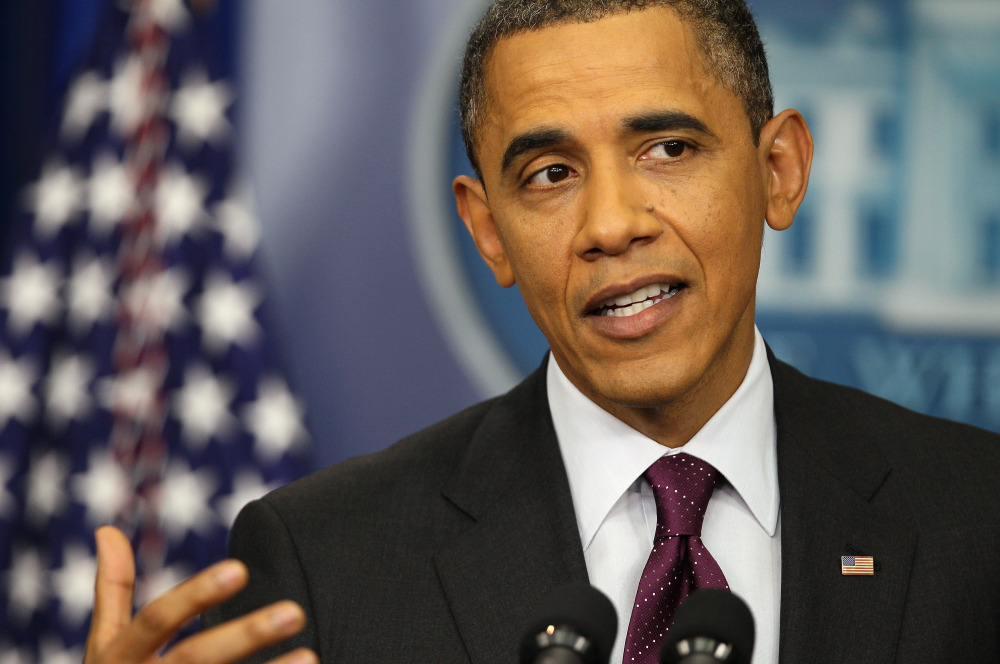 President Obama speaks during a news conference in the Brady Press Briefing Room of the White House on Tuesday.

During his first news conference of the year, President Obama defended his decision not to intervene militarily in Iran and Syria.

"Sometimes [force] is necessary but we don't do it casually," he said. "There is a cost and we don't play politics with it."

Questions about Iran took center stage, especially because the news conference was held a day after President Obama met with Israeli Prime Minister Benjamin Netanyahu, who has been weighing whether to strike Iran's nuclear facilities.

"It is deeply in everybody's interest... to see if this can be resolved in a diplomatic manner," Obama said. He also added that sanctions were having a "significant effect" on Iran and they will get tougher.

"At this stage," Obama said, "we have a window of opportunity where this could be resolved diplomatically."

The president dismissed the idea that a decision about Iran has to be made in a week or a month and he also dismissed the "bluster" of the Republican presidential candidates, saying when they're asked what they would do, they recite the same policies as Obama.

Obama also announced a new housing initiative that will allow homeowners with mortgages insured by the Federal Housing Administration to refinance at a lower rate. Along with that he announced a settlement that will compensate active military who were wrongfully foreclosed on and who were not given an opportunity to refinance.

The president was also asked about Rush Limbaugh, immigration reform and the Republican nomination contest. We live blogged the conference, so keep reading, if you want a blow-by-blow account.

NPR's Mara Liasson says this was a "confident, happy president" who was never on the defensive.

Mara said that it sounded like he was happy with his decision to stay out of Syria and didn't seem like he had been "put in box" by Netanyahu. In fact when asked to explain what he meant about having "Israel's back," he compared it to having the back of other allies like Britain and Japan.

Obama said that the NATO coalition in Afghanistan is sticking to the exit strategy set up in Lisbon.

He said the Koran burning incident "concerns" him and that it's an "indication of the challenge in that environment and an indication that now is the time to transition."

Obama is asked to weigh in on tonight's Republican contests, especially considering that Mitt Romney has called him the "most feckless president since Carter."

Obama was asked what he has to say to Romney.

Update at 1:46 p.m. ET. Every American Should Want Immigration Reform:

"Speaking substantively, every American should want immigration reform. We have a system that is broken," he said. "We can be a nation of laws and a nation of immigrants."

Obama declines to comment on whether Rush Limbaugh's apology was sincere.

"I wanted Sandra [Fluke] to know that I thought her parents should be proud of her," he said, adding that being part of a democracy should not mean "being demeaned and insulted, especially as a private citizen."

"It is indisputable that I've had Israel's back for three years," Obama says answering a question as to why he had not visited Israel as president. He also noted that he visited Israel twice as a senator.

Update at 1:36 p.m. ET. No Breakthrough In First Meeting With Iran:

Answering a question about earlier news that the U.S. and its allies have agreed to return to negotiations with Iran, Obama says he doesn't expect the issues to be resolved in one meeting.

But Iran, he said, knows what they must do and it's not difficult.

"Iran has to come to the table and prove its nuclear program is peaceful," Obama said.

That said Obama said he expects, "we will have a good sense pretty quickly about how serious they are about resolving the issue."

President Obama says sanctions on Iran are "starting to have significant effect" on Iran and they will get tougher. He says to talk of military action right now is premature.

"It is deeply in everybody's interest... to see if this can be resolved in a diplomatic manner.

"Sometimes [force] is necessary but we don't do it casually," he said. "There is a cost and we don't play politics with it."

In a follow up question, Obama said that that doesn't mean that there is any rift between relationships with the United States and Israel.

Obama moves from Iran to Syria, saying it presents a different situation than Libya.

It is "much more complicated," he said. "The notion that the only way to solve all of these problems is to deploy our military... that hasn't been true in the past, and won't be true in the future."

Still, Obama says, he is sure that President Bashar Assad will step down and the United States is working on diplomatic solutions.

Update at 1:23 p.m. ET. Iran Can Be Solved Diplomatically:

"At this stage," Obama says, "we have a window of opportunity where this could resolved diplomatically."

Obama says they are cutting the refinancing fees required by FHA loans.

-- If a member of the armed forces was foreclosed illegally, they will be "substantially compensated."

-- If a member of the armed forces was not allowed to refinance to a lower interest rate, the banks will refund the money they could've saved and lower their rates.

Obama opens his press conference acknowledging that there is a "political contest" going on tonight.

He quickly moves on to lay out his domestic agenda:

-- Congress should pass the Buffett rule.

-- Congress should pass his proposal for homeowners to refinance.

On our live coverage of the press conference, Mara provided a bit more detail about the housing program Obama will unveil.

Mara says it could benefit 2 to 3 million of homeowners whose mortgages are backed by the Federal Housing Administration. The program would save homeowners $1,000 a year.

You can listen to NPR's live coverage by clicking here.

While we wait for the president, it's worth noting that the Dow has just posted its biggest loss of the year, according to the AP.

We mentioned the economic upswing earlier, but this just highlights the tenuous position of the economy.

NPR's Mara Liasson tells our Newscast unit that we should expect questions on the violent crackdown in Syria, the rising tensions in the Middle East, and about tensions between Iran and Israel over Iran's nuclear program.

Today's press conference will be held at the James S. Brady Press Briefing Room, which is in the West Wing of the White House and where the president's press secretary delivers his daily briefing.