Accessibility links
How Do You Ship A Horse To The 2012 London Olympics? : The Two-Way The elite athletes who travel to London for this summer's Olympic Games will include petite gymnasts, huge wrestlers — and elite horses, which compete in dressage and other events. The man whose job it is to get 50-60 horses to England says, "It's quite a logistical feat." 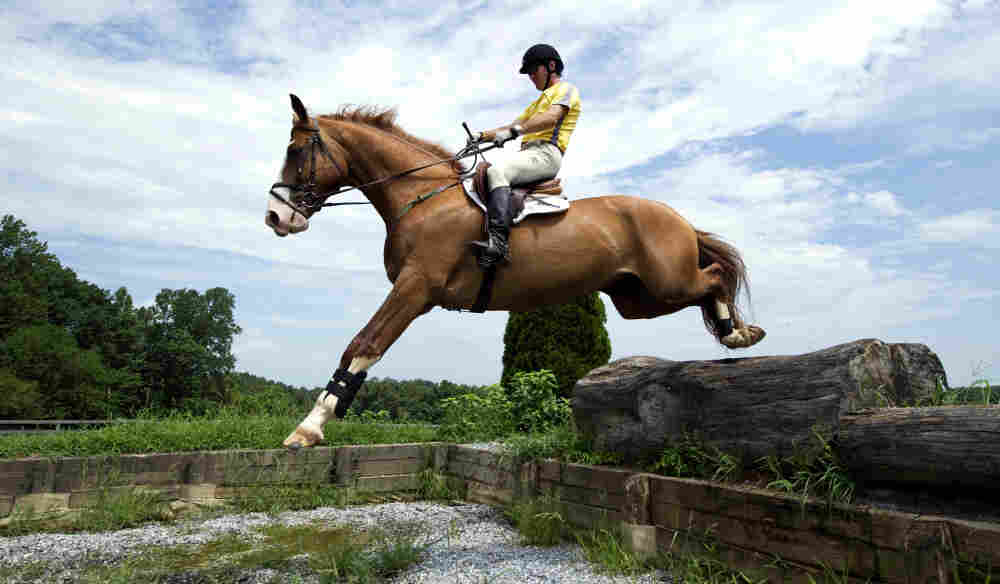 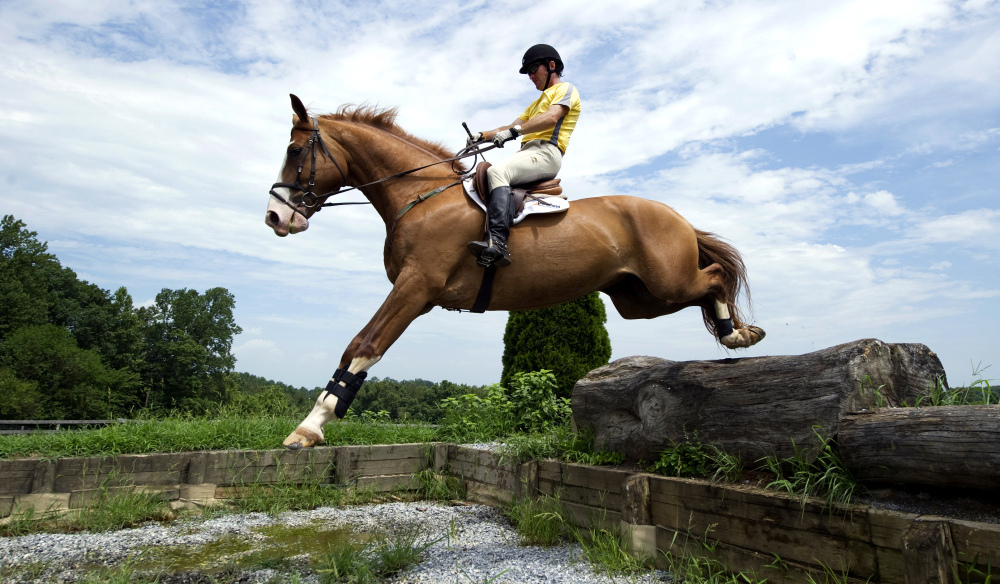 U.S. Olympic Equestrian rider Phillip Dutton jumps with Zeizos in West Grove, Pa., in this 2010 photo. Dozens of horses will fly from America to England for the 2012 Summer Olympics.

The elite athletes who travel to London for this summer's Olympic Games will include petite gymnasts, huge wrestlers — and elite horses, which compete in dressage and other events. Getting these strong and delicate animals to the Olympics is no job for an amateur. In fact, it's the job of Tim Dutta, who owns an international horse transport company.

"It's quite a logistical feat," Dutta tells Morning Edition co-host Steve Inskeep. Dutta, who has been moving horses around the world for some 25 years now, says his company will be flying from 50-60 horses to England.

"Most horses, I anticipate, will be going from Newark airport in New Jersey to Stanstead, in England. We'll be flying on an MD-11, and the carrier, we expect, is going to be Federal Express."

That's right: Dozens of valuable, highly trained horses will be FedExed from America to London. Many dressage and jumping horses weigh at least 1,100 pounds.

Steve then asks a question that might occur to anyone who's paid to send a package recently: "Does FedEx charge you by the pound?"

"FedEx charges us on a pivot-weight, yes. That's their model. It is usually by the kilo. And it's a volume weight charge," Dutta says.

But if a cargo hold full of horses sounds a little harsh, consider that they'll also have a veterinarian, a groom, and others with them. And the equine athletes will be in custom-built stalls.

"The horses are flown in jet stalls, which are proprietary stalls," Dutta says. "All of the horses that will be going to the Games will be flying two in a pallet, meaning they'll be sharing the container with another horse."

That gives them more space, he says — the pallets can accommodate as many as three horses. As for an inflight beverage and snack service, the horses will get hay, along with apple juice mixed with water. They'll also get Gatorade, to help them stay hydrated, Dutta says, "and of course, carrots."

His staff will use what Dutta calls "mood lighting" — dimming the lights to keep the horses serene. And if one does start to fret, "we'll have a groom stand with them and talk," Dutta says.

The flight over the Atlantic Ocean will take just more than six hours. Still, Dutta says it's possible for horses to suffer jet lag.

"We've done quite a lot of studies, especially in long fights. They are an animal of routine," he says, noting their tightly scheduled workouts and meals.

Dutta says that after long trips, horses' top performances usually come by using one of two strategies: flying just four days before the event, or arriving near the venue 14-21 days ahead of time, to let them establish a new routine.

And he tells Steve that, like people, some horses are just better travelers than others.

"Most horses that travel around the world are used to it. They are just like a frequent traveler at any airport; they know what is going on," Dutta says. "But even though they are superstars, we do have some horses that do not like to travel, that are worriers — that worry about the noise, or the sound, or the pressure."

The horses remain standing during the flight, with two ropes helping to secure their halter. That's as close to a seatbelt as the equine athletes come.

Still, Dutta says that during the flight, the pilots may decide to turn off the "fasten your ropes" light, so the horses can move about a bit more freely.

The goal, he says, is to make the flight stress-free. The horse-cargo flights sometimes accept long delays, or alter course by 1,000 miles or more, to avoid potential turbulence in the air.

And in some cases, a horse's vet may decide to administer a mild sedative — "which is equivalent to, say, a glass of Champagne or two," Dutta says.

The horses' handlers do anything they can to get them to England healthy, and with low stress levels, so they're relaxed enough to perform well in their competitions.

"We individually try to mix and match what each horse needs," Dutta says. "Because after all, this is the Olympic Games. And there is no dress rehearsal. We have one shot. And we are all about winning."

Dutta spoke with Steve from Wellington, Fla., where the U.S. Equestrian Federation holds Olympic trials later this month. That event will help fill the U.S. roster of riders and horses for the games. But as Morning Edition reported Tuesday, a 70-year-old man has already won a spot on Japan's equestrian team.