Accessibility links
Anonymous Picks Up The Pieces After Betrayal From One Of Its Own : The Two-Way The chatter ranged from denial to outrage about the news that one of their own had cooperated with the FBI. 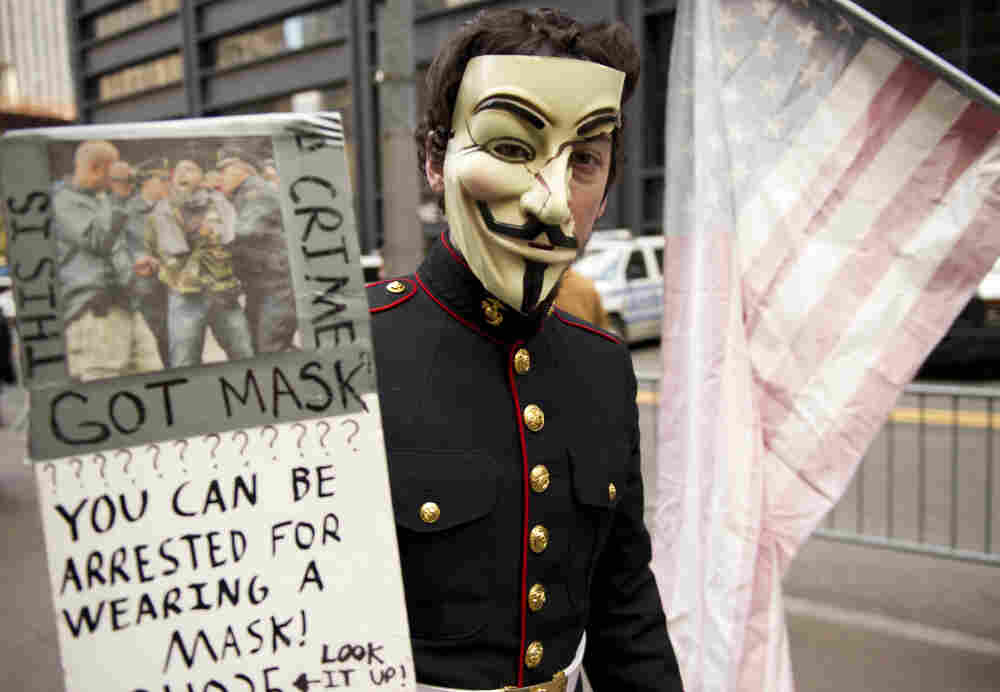 A young man with wearing a military uniform and mask usually associated with the group anonymous marches with Occupy Wall Street protesters in this November. Don Emmert/AFP/Getty Images hide caption 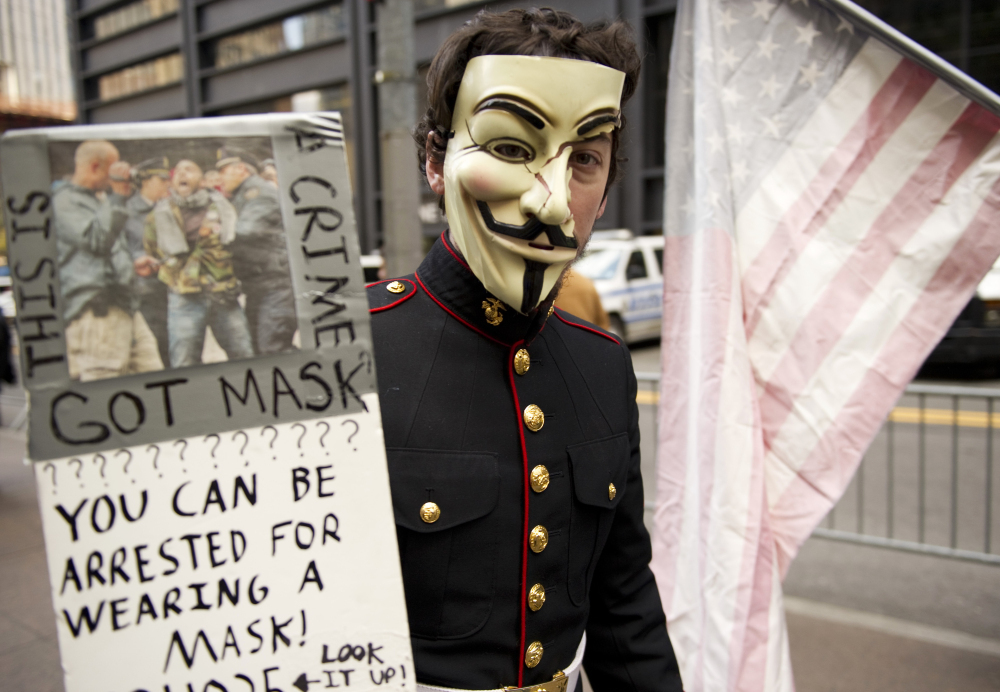 A young man with wearing a military uniform and mask usually associated with the group anonymous marches with Occupy Wall Street protesters in this November.

As Ars Technica describes him, Sabu was "a sort of hacker demigod in the world of Anonymous."

"If you couldn't trust him, who could you trust?" Ars Technica writes.

But as we wrote yesterday, Sabu, or Hector Xavier Monsegur turned his back on the hacker collective. According to the FBI and a stack of documents released yesterday, Sabu helped them for months, egging on his fellow hackers on IRC chats on a government issued laptop that was logging every word and revealing small details that eventually led the FBI to five other hackers who the the FBI says are part of the collective's leadership.

Ars Technica dug through the court records and pieces together a great narrative of how 27-year-old Jeremy Hammond was brought down. We'll let you click over, but essentially, the FBI glommed on to tiny personal details revealed during chats with Sabu to identify Hammond. They mixed that in with surveillance and moved in for an arrest yesterday morning.

The revelations contained in those documents have hit the organization hard. Wired's Threat Level blog spent some time in IRC chats, yesterday, and reports that the chatter ranged from "denial about Sabu's involvement to outrage and hatred for Monsegur."

Wired reports on one conversation with an anon who said Sabu had taught him/her Python programming:

Anon: we need to pick our lives back up
Anon: and go on
Anon: antisec
Anon: anonymous
Anon: everything
Anon: I'll keep on doing what I have always done for Anonymous
Anon: You have seen it today
Anon: http://musterroom.com/ antisec goes on (refering to an Antisec signed defacement today of a small law enforcement chat site)
Anon: anonymous goes on
Anon: I think it was merely a speedbump for the collective
Anon: but a massive emotional [expletive-slap] for individuals

"'Anyone who trusted Sabu is going to be in a panic right now,' said Jennifer Emick, a former Anonymous activist who began working against it when it started attacking the U.S. government. 'Hard drives are being deleted.' ...

"'There's some paranoia. There's a lot of hate being spewed,' said Gregg Housh, a leader of Anonymous in its less criminal days and a regular correspondent of Sabu's."

What's clear is that this story is far from over. Anonymous hacked the website of the Spanish antivirus firm Panda. The group defaced the site's blog page by leaving behind a video detailing its exploits and a simple message scrawled in all caps in red letters over black text. (You can still access a cached version of the page.)

"Yeah yeah, we know, Sabu snitched on us. As usually happens FBI menaced him to take his sons away. We understand, but we were your family too. (Remember what you liked to say?)," the note read. "It's sad and we can't imagine how it feels having to look at the mirror each morning and see there the guy who shopped their friends to police."

Sabu has two children. And Panda, the message read, has been cooperating with authorities. Along with their message, they also published what appeared to be a series of passwords.