Accessibility links
'A Difficult Day': Colts Release Peyton Manning, Making Him A Free Agent : The Two-Way Saying today was a "difficult day of shared pain," Jim Irsay, the owner of the Indianapolis Colts, said the team was releasing quarterback Peyton Manning from his contract. Manning has been the centerpiece of the Colts' organization for 14 seasons. 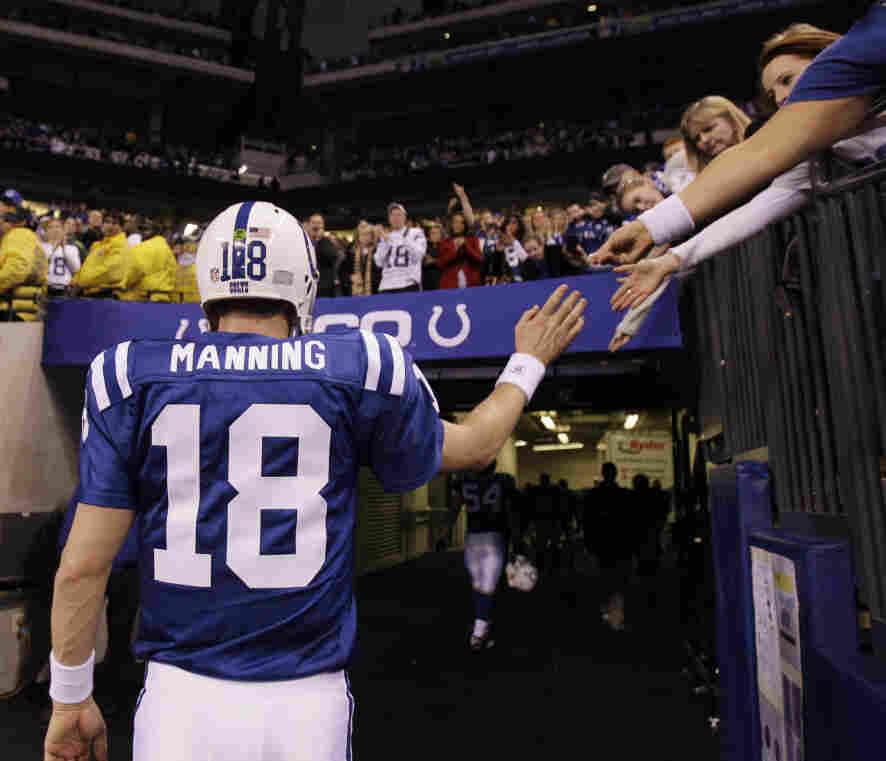 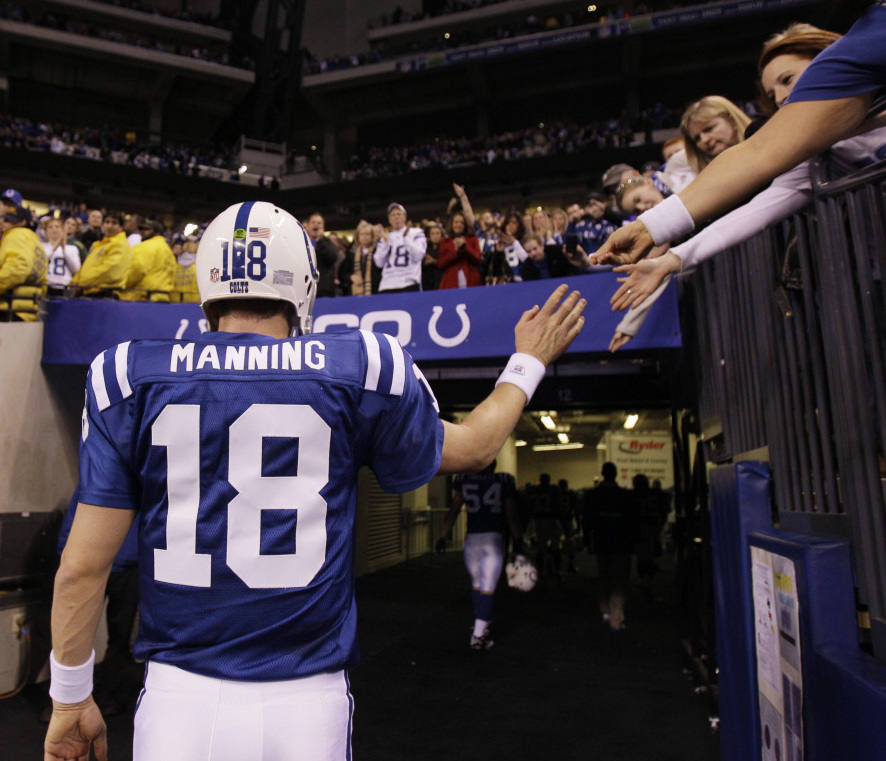 Indianapolis Colts quarterback Peyton Manning walks off the field after the Colts lost to the New York Jets, 17-16, in an AFC wild card game in January.

Saying today was a "difficult day of shared pain," Jim Irsay, the owner of the Indianapolis Colts, said the team was releasing quarterback Peyton Manning from his contract.

"There will be no other Peyton Manning," he said, before momentarily tearing up. "The number 18 jersey will never be worn again."

Manning has been the centerpiece of the organization for 14 seasons. As Mark explained, yesterday, this was a business decision.

"If the Colts [kept] him, they would have owed him a $28 million bonus. Instead, because the team has the first pick in the NFL draft, the Colts are expected to choose Stanford star Andrew Luck to be their quarterback of the future," Mark wrote. The decision also makes Manning a free agent, who can have his pick of NFL teams.

Manning spoke immediately after Irsay and he also teared up.

"I will leave the Colts with nothing but good thoughts," he said, but "our circumstances make it best for us to take the next step."

The Los Angeles Times spoke to John Madden, the legendary NFL coach and commentator. He said he expected Manning to have a happy ending, like Troy Aikman with the Cowboys or Dan Marino with the Dolphins.

"Peyton was always perfect," Madden told the Times. "Guys that are perfect, things kind of end up for them. You think of the other side, and they're not always happy endings. You think of Joe Namath at the end, Johnny Unitas at the end, Hall of Fame quarterbacks that ended up in other places – Brett Favre and Joe Montana.... Maybe that's old-fashioned thinking, but you just hope that these guys that have great careers will have happy endings."

The AP provides a bit of background on Manning's legacy:

"He forever will be thought of around these parts as No. 18, the quarterback who led the Colts to an NFL championship. He'll be remembered, too, for his record four MVP awards, his 50,000 yards passing and his 200 consecutive starts. Most of all, Manning will be the guy in the horseshoe helmet who turned around a franchise and transformed a basketball-loving city into a football hotbed that hosted the Super Bowl a month ago.

"Arizona, Miami, Tennessee, Washington and the New York Jets all have been rumored as possible destinations."

Update at 1:52 p.m. ET. The Situation Surrounding The Decision:

NPR's Tom Goldman broke down the situation surrounding the decision for our Newscast unit.

-- First he said, the team was weighing a $28 million roster bonus that they would have to pay Manning if he remained on the roster.

-- Second they were weighing his health. Manning is recovering from surgery to repair an injured disk.

-- Third, the team had a "horrible season last year and they're rebuilding."

-- Finally, the Colts have first pick in this year's draft and as we alluded to earlier there are two great quarterbacks they can pick from.