Accessibility links
Report: 'Explosive' Growth Of 'Patriot Movement' And Militias Continues : The Two-Way The surge in groups that "see the federal government as their primary enemy" and in some cases have militias as their "armed wings" continues, the Southern Poverty Law Center says. The growth has come since President Obama came on the national scene. 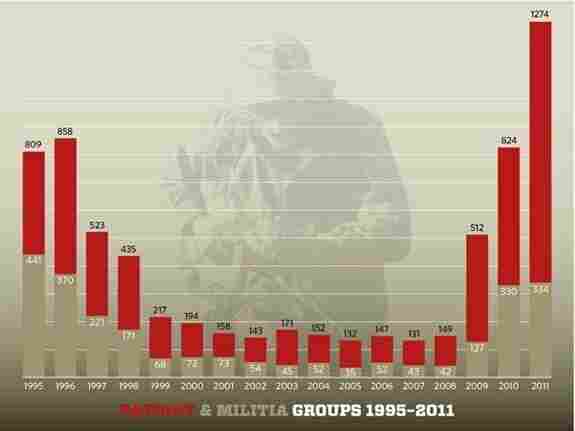 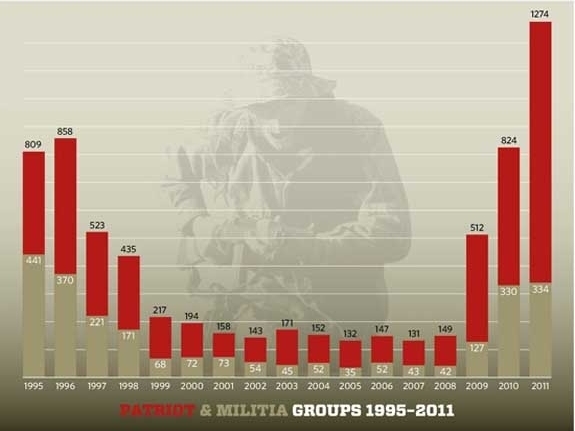 "Patriot movement groups" in red. Militias — armed wings of such organizations — in gray.

An enormous surge in the number of groups that "see the federal government as their primary enemy" and in some cases have militias as their "armed wings" continues, the Southern Poverty Law Center reports today.

According to the civil rights organization's researchers, the rapid growth in such "Patriot movement" groups, which began when Barack Obama ran for president in 2008, has mushroomed since. They estimate there are now nearly 10 times more Patriot and militia organizations — 1,274 in all — in the U.S.

Mark Potok, a senior fellow at the law center, told us this morning that Obama's candidacy and election has fueled the growth in groups that believe the federal government will "impose martial law ... confiscate guns ... open concentration camps run by FEMA ... and force the U.S. to become a socialist state."

"It's a conspiracy-driven movement," he added.

Also driving the growth in such groups: the recent recession, weak recovery and increasing "income inequality."

In its report, the center writes that:

"The Patriot movement first emerged in 1994, a response to what was seen as violent government repression of dissident groups at Ruby Ridge, Idaho, in 1992 and near Waco, Texas, in 1993, along with anger at gun control and the Democratic Clinton administration in general. It peaked in 1996, a year after the Oklahoma City bombing, with 858 groups, then began to fade. By the turn of the millennium, the Patriot movement was reduced to fewer than 150 relatively inactive groups.

"But the movement came roaring back beginning in late 2008, just as the economy went south with the subprime collapse and, more importantly, as Barack Obama appeared on the political scene as the Democratic nominee and, ultimately, the president-elect. Even as most of the nation cheered the election of the first black president that November, an angry backlash developed that included several plots to murder Obama. Many Americans, infused with populist fury over bank and auto bailouts and a feeling that they had lost their country, joined Patriot groups."

The center's researchers report there's been slower growth in the number of "hate groups" across the nation — organizations that focus their anger on specific types of people and "propagate known falsehoods." There were an estimated 1,018 hate groups at the end of 2,011, up from 1,002 the year before.