Accessibility links
Obama, Cameron Say Afghan Mission Remains Unchanged : The Two-Way The American and British leaders reaffirmed their commitment to gradually withdrawing most forces by the end of 2014. 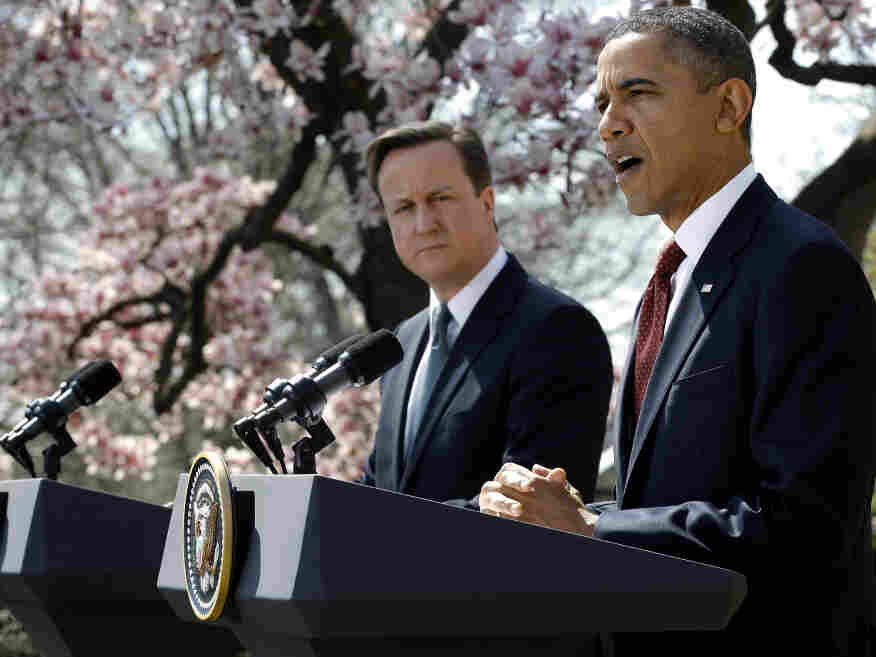 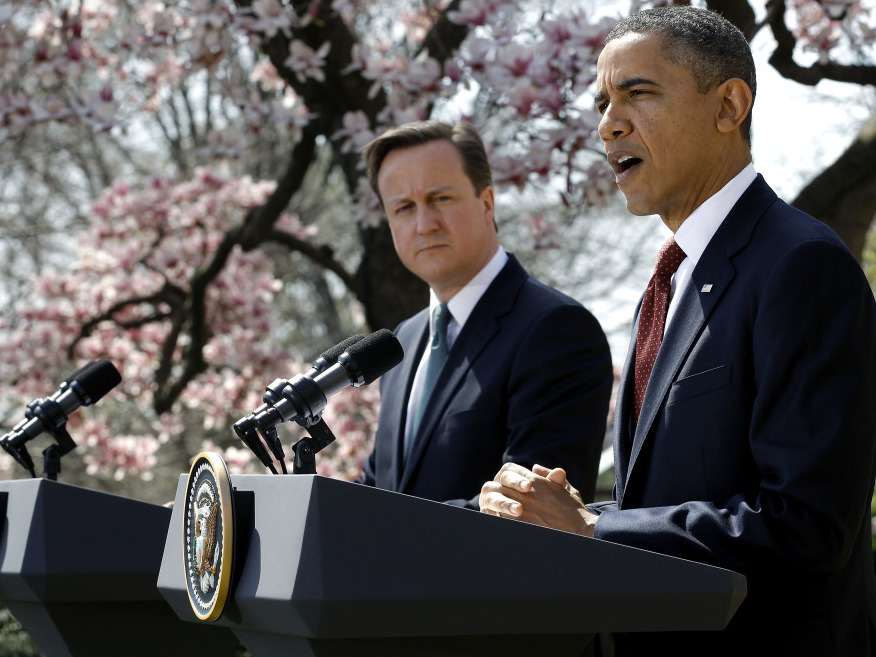 President Obama and British Prime Minister David Cameron during their news conference this afternoon in the Rose Garden of the White House.

The U.S., Britain and their NATO allies cannot accelerate the withdrawal of troops from Afghanistan because it's critical that they not leave until that nation's security forces can stand on their own and ensure that al-Qaida never has a safe haven there again, President Obama and British Prime Minister David Cameron said during a joint news conference this afternoon at the White House.

"We will not give up on this mission," Cameron said at one point. The plan, he and Obama said, remains to have most troops withdrawn by the end of 2014.

Coming just three days after the murders of 16 Afghan civilians, allegedly by a U.S. Army staff sergeant, and the recent burnings of Qurans by allied forces that enraged many Afghans, the two leaders' back-and-forth with reporters focused mostly on the situation in that central Asian nation.

But there were also questions about Iran (the leaders praised each others' efforts to put pressure on that nation with sanctions) and Syria (they called on the Assad regime to stop butchering its people, but did not come close to hinting of any plans to take military action).

We live-blogged as they spoke. Scroll down and "read up" if you want to see how things happened chronologically.

He and Cameron have learned, Obama says, that during crises such as that happening now in Syria, it's important that they have "thought through all of our actions before we take those steps."

And that was the last question and answer.

Update at 1:02 p.m. ET. Are Military Plans Being Made To Deal With Syria?

"Our military plans for everything," Obama says.

And Cameron says planners do "kick the tires, push the system, ask the difficult questions."

But both leaders mention that the situation in Syria is complicated and does not present an easy military solution.

Update at 12:59 p.m. ET. Stopping The "Butchering" In Syria Is In Russia's Interest:

Asked about Russia's refusal to support efforts to stop the Assad regime from continuing to kill Syrians, Cameron says "it's in Russia's interest" to help because the people in Syria can see it's "people in the West [who are] wanting to help them," not Russia.

"We will do everything we can to solve this diplomatically," Obama says.

"Those sanctions are going to begin to bite even harder this summer," Obama says of measures aimed at convincing Iran to give up any nuclear ambitions. "They need to seize this opportunity for negotiations" to avert even tougher measures.

Update at 12:53 p.m. ET. Obama On Why Polls Show Falling Support For The Mission In Afghanistan:

"We've been there for 10 years" and both Americans and Britons "grow weary" of war over time, Obama says. "No one wants war." And anyone who tells a pollster that they "enthusiastically" support war "probably hasn't been involved in a war."

Staying on the subject of the war in Afghanistan, Cameron tells a Sky News reporter that "if you compare where we are today to where we've been two, three years ago, the situation is considerably improved." He believes the "troop surge" of the past couple years had a "transformative effect" on southern Afghanistan, where "insurgent attacks" are down and "security is right up."

Obama calls first on NPR's Ari Shapiro, who asks about the current situation in Afghanistan and "what makes you confident that two years from now" things will be better there?

The president makes the case for the phased withdrawal of U.S. and NATO troops over the next two years, and says a "steady, responsible transition process" will lead to a stable Afghanistan. "There are going to be multiple challenges along the way," he adds, but he does not expect any "sudden" changes to the transition plan.

The president's "tough, reasonable approach has united the world" behind sanctions aimed at convincing Iran to give up any nuclear ambitions, Cameron says.

"We will not give up on this mission," Cameron says of the effort in Afghanistan, because that nation cannot again be a safe haven for al-Qaida. "We will not build a perfect Afghanistan," he adds, but one that is "capable of delivering its own security."

In his opening comments, the prime minister says the U.S. and U.K. are "two states united for freedom and enterprise."

He and Cameron have agreed "to keep increasing pressure" on the regime of Syrian President Bashar Assad, Obama says. He ticks off sanctions and other measures, but does not mention military options.

"We're going to complete this mission and we're going to do it responsibly," President Obama says of the war in Afghanistan. He and Cameron have "reaffirmed the transition plan" that aims to have most U.S. and NATO forces out of that country by the end of 2014.

President Obama is beginning his comments as you would expect — with words about the long, deep friendship between the U.S. and U.K.

Reporters seem to be in position and White House aides have done some "mic checks," so perhaps we'll be starting momentarily.

The news conference was supposed to get going at 12:05 p.m. ET. But the TV shots from the Rose Garden show that most of the seats are empty where the reporters will be sitting. So things must be running late.

C-SPAN is streaming its coverage here. The White House will have its own live feed as well.