Accessibility links
Killing Of Fla. Teen Trayvon Martin Becomes National Story About Race : The Two-Way George Zimmerman claims he was out on Neighborhood Watch patrol, saw a suspicious youth and followed the boy. Trayvon's family and supporters want to know if the unarmed teen, who was black, was gunned down in a tragic case of racial profiling.

Now that 911 recordings show how a white Florida man continued to follow a 17-year-old black boy even after police advised him not to — and captured the sound of the man killing the unarmed youth with a shot to the chest — Trayvon Martin's family wants the FBI to take over the investigation into his killing. 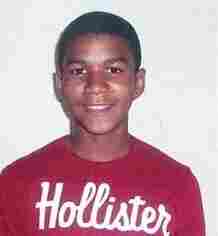 The gunman says it was an act of self defense during a Neighborhood Watch patrol.

But, "I just want answers from the police department about what happened with my son," Trayvon's mother, Sabrina Fulton, said during a tearful news conference on Friday. And as NPR's Joel Rose reported on Morning Edition, the family "has lost faith in the Sanford [Fla.] police department."

There's a rally planned today in Sanford, Fla., to bring more attention to what has now become a national debate about what may have been a case of racial profiling that turned deadly.

If you're just catching up on this story, Joel's Morning Edition report wraps up the news so far and includes portions of those 911 recordings (note: the content could be disturbing to some).

And our colleagues at WMFE sum up how the story began this way:

"Seventeen-year-old Trayvon Martin of Miami, was walking from a convenience store to the home of a family friend in a gated community in Sanford on Feb. 26th. He was confronted by neighborhood watch volunteer George Zimmerman. Zimmerman called police to report a suspicious person but before police arrived, the two struggled and Zimmerman shot and killed the teenager. Community members are demanding Zimmerman's arrest but Sanford Police say they don't have sufficient evidence to dispute his claims of self defense."

At the Orlando Sentinel, which has extensive coverage, there's a story that notes how — beyond the issue of profiling — "if George Zimmerman didn't break every rule in the book when it comes to Neighborhood Watch programs, he came close. ... Zimmerman was armed. He was alone. And while waiting for police, he somehow got into a fight with the person he thought suspicious. All three of those actions are strongly discouraged by the National Sheriffs' Association, which oversees about 20,000 Neighborhood Watch programs."

Zimmerman, 28, has not been charged with a crime. According to The Associated Press, "in the months leading up to the shooting, [he] had called police numerous times to report incidents."

Trayvon's parents have put an online petition on Change.org, looking for support in their call for Zimmerman to be charged.

In a statement, the department said its Civil Rights Division, the U.S. Attorney's Office for the Middle District of Florida and the FBI opened an investigation into the "facts and circumstances" surrounding Martin's death.

"The department will conduct a thorough and independent review of all of the evidence and take appropriate action at the conclusion of the investigation," the statement said. "The department also is providing assistance to and cooperating with the state officials in their investigation into the incident."

Update at 5:21 p.m. ET. On The Law That Likely Protects Zimmerman:

We've posted a more detailed explanation of the "stand your ground" law that protects Zimmerman.

Over the weekend, The Miami Herald reported that Zimmerman is "a habitual caller to cops."

And it wrote that:

"On at least two prior occasions, the Sanford Police Department was accused of giving favorable treatment to relatives of officers involved in violent encounters with blacks.In 2010, police waited seven weeks to arrest a lieutenant's son who was caught on video sucker-punching a homeless black man.

"In 2005, two security guards — one the son of a longtime Sanford police officer and the other a department volunteer — killed a black man they said was trying to run them over. Black leaders complained of a lackluster investigation. The guards ultimately were acquitted."

Robert Zimmerman, George Zimmerman's father, has said in a letter to the Sentinel that "George is a Spanish speaking minority with many black family members and friends. He would be the last to discriminate for any reason whatsoever."

He also wrote that:

"At no time did George follow or confront Mr. Martin. When the true details of the event become public, and I hope that will be soon, everyone should be outraged by the treatment of George Zimmerman in the media.

"Our entire family is deeply sorry for the loss of Trayvon. We pray for the Martin family daily. We also pray that the community will grieve together and not be divided by more unwarranted hate."