Accessibility links
Developing: Suspect Surrounded In France, Claims Al-Qaida Ties : The Two-Way Seven people — three children and a rabbi at a Jewish school, and three French soldiers — have been shot to death in recent weeks. According to France's interior minister, the suspect claims he was avenging the deaths of Palestinian children. 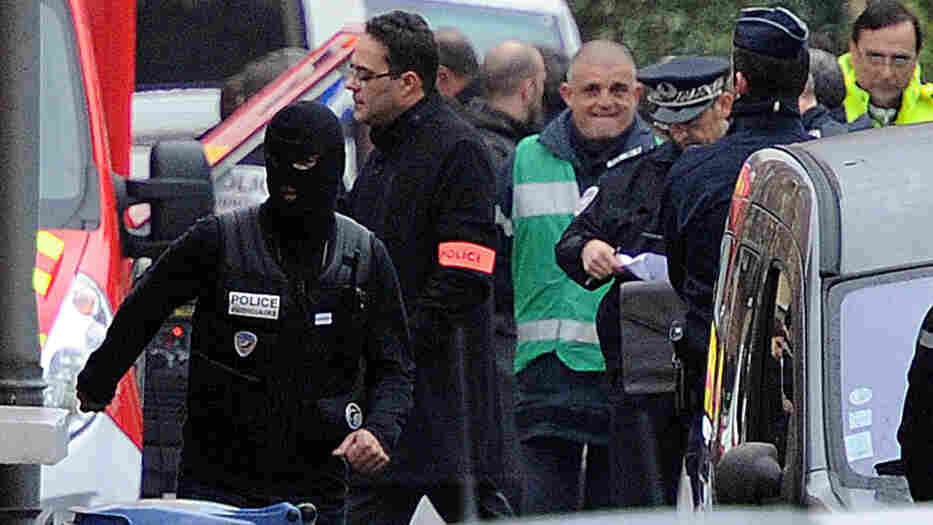 French police officers at the scene of the siege today in Toulouse, where a suspect in recent killings is said to be holed up in an apartment. Pascal Guyot /AFP/Getty Images hide caption 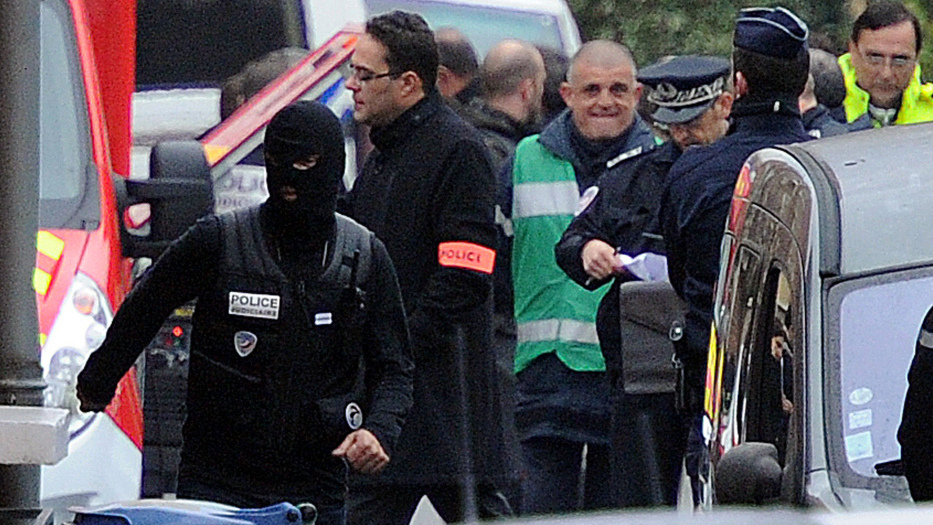 French police officers at the scene of the siege today in Toulouse, where a suspect in recent killings is said to be holed up in an apartment.

There's a dramatic scene unfolding in Toulouse, France, where police have surrounded an apartment building in which the suspect in the recent high-profile killings of at least seven people is said to be barricaded.

According to France 24, which is live blogging the news as much of France watches on television, "police laying siege to the home of the chief suspect ... say the 24-year-old gunman has agreed to surrender later today."

He has reportedly wounded at least three officers today during a gun battle.

France 24, the BBC and other news outlets are reporting that the suspect has been identified as Mohammed Merah, a French national of Algerian origin. And as the BBC reports, officials say he has claimed to belong to al-Qaida and to have killed four people (three of them children) at a Jewish school and three French soldiers to "avenge Palestinian children".

"The shooting suspect is 'talking a lot, claiming his jihadist convictions' and calling himself a 'mujahedeen,' " French Interior Minister Claude Gueant has told reporters, according to The Associated Press.

As we wrote Tuesday, the killings in recent weeks raised fears that the gunman was targeting religious and ethnic minorities.

French news outlets, the BBC says, are reporting that "the suspect was arrested in Kandahar, Afghanistan, in 2010 for unspecified, but not terrorist-related, criminal acts and also has a criminal record in France." Reuters says it has been told by a "prison director" in Kandahar that the suspect had been sentenced to three years in prison there, but escaped.

We'll keep an eye on what's happening and update this post as the story develops.

The Associated Press is now reporting that two new blasts and brief gunfire were heard near the apartment building where the suspect is holed up. An Interior Ministry official was quoted saying no assault was under way.

The Associated Press is quoting a French Interior Ministry official saying the police had blown up the shutters outside the apartment where the suspect is holed up to to pressure him to surrender. The suspect had apparently gone back on a previous decision to turn himself in.

The Associated Press is reporting that as midnight approached, "three explosions were heard and orange flashes lit up the night sky near the building." The BBC is reporting that a deputy mayor of Toulouse "confirms an assault has begun" on the apartment where the suspect is holed up.

France 24 writes that, "Deputy Mayor Jean-Pierre Havrin has told Reuters: 'I'm standing 50 metres from the [besieged] apartment. Any nearer and I would actually be inside with him. This report about him being arrested is absolute nonsense.' "

According to The Associated Press, police are still preparing to storm the building if the suspect doesn't surrender. So, as often is the case when stories are developing, the earlier report his being arrested may have been premature.

Reuters reports that: "A gunman suspected of killing of seven people in the name of al-Qaida was arrested by police in southwest France after a nearly 12-hour operation in the city of Toulouse, French television channels BFM TV and i-Tele reported on Wednesday. One police source who is not directly linked to the investigation confirmed the arrest to Reuters, but several other sources said they were not aware of it."

Update at 8:40 a.m. ET. He's Talking: According to the AP, police say the suspect has "resumed talking to negotiators."

Update at 7:50 a.m. ET. More On The Suspect, And Some Conflicting Details:

As often happens when stories are developing, details vary from news outlet to news outlet. Reuters is now reporting, for example, that the director of prisons in Kandahar has told the news service that the suspect "had been arrested for bomb making in the southern Afghan province of Kandahar in 2007 but broke out of jail months later after a daring Taliban prison break."