Accessibility links
Women Continue To Fill Rick Perry's Facebook Wall With Mock Questions : The Two-Way They've posted thousands of queries about menstruation and other women's health issues as a protest of the Texas governor's positions.

Here's the first of more than 5,600 comments we saw this morning when we went to Texas Gov. Rick Perry's Facebook page and opened up a post on his wall thanking those who supported his bid for the Republican presidential nomination:

"Governor Perry, I am experiencing mid-cycle cramping. Is this a punishment from god for not getting pregnant this month?"

That question seems to have since disappeared, but the message gives you a sense of what's been happening for several days on Perry's Facebook wall. As The Washington Post's She The People blog says, many women are "facetiously seeking advice on their menstrual periods" from the governor, "since he's styled himself as an expert on women's health."

And it's an organized protest over Perry's desire to cut government funds that go to Planned Parenthood.

Perry spokeswoman Catherine Frazier tells the Dallas Morning News that "there is no place for such inappropriate comments, which do nothing to advance the important discussion about issues surrounding the Women's Health Program. It's clear many of these individuals are basing their remarks on something other than the facts — Gov. Perry is proud of his efforts to keep this program going with or without the federal government." 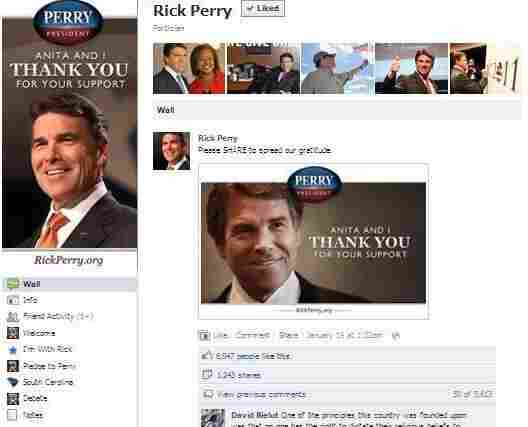 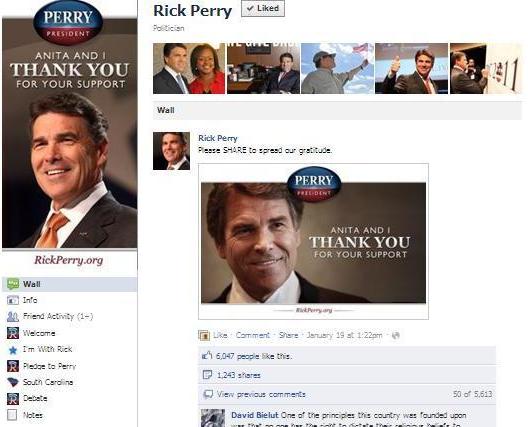