Accessibility links
Cat Falls 19 Floors, Lands Purrfectly : The Two-Way Sugar took a long fall, but came away with only minor injuries. Cats, it seems, can turn themselves into something akin to feline parachutes. And research shows it's actually better for a cat to fall from up high than lower levels. 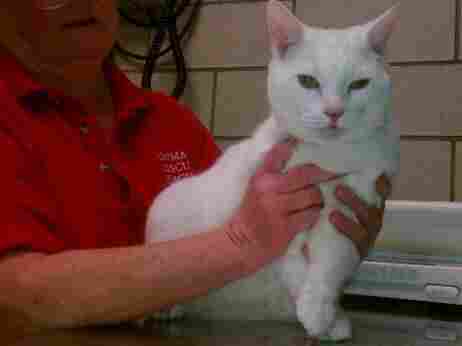 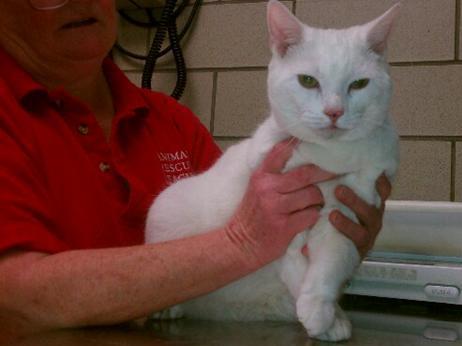 Sugar, after her fall.

A woman in Boston saw something white fall past her second floor window Wednesday afternoon "and ran to see what it was," according to the Boston Globe.

Turns out it was Sugar the cat, who had plunged to the ground from an apartment on the 19th floor.

Don't panic, everyone. Sugar is OK. Just some bruising of her lungs, according to the Animal Rescue League of Boston.

It helped, according to the Globe, that Sugar landed "on a soft patch of grass and mulch."

But as ABC News' 20/20 has explained, there's also been research done that indicates a cat may be better off falling from a high place than a relatively low one. It's called "high rise syndrome."

"Apparently," 20/20 reported, "cats that fall farther are able to spread their bodies like feline parachutes to slow themselves down." Then they land, of course, on their feet.

Want to see how a cat falls, in slow motion, and learn more about high rise syndrome? Check this video from National Geographic.

Sugar, by the way, was reunited with her owner thanks to a microchip embedded under her skin. The owner had been at work when Sugar took to the sky.

(H/T to the Globe, which used "purrfectly" in its headline before we could.)