Accessibility links
Trayvon Was 'Typical Teen,' Zimmerman More Complex : The Two-Way Profiles of the teenager killed in a case that has reignited a national debate about race and the man who pulled the trigger reveal a great deal about them both. 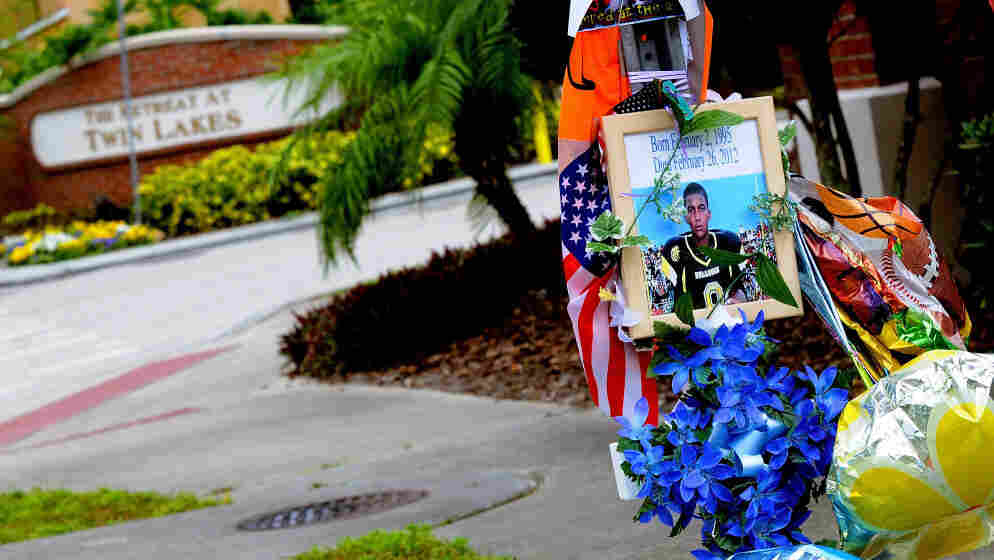 A memorial to Trayvon Martin sits outside The Retreat at Twin Lakes community in Sanford, Fla., where the teenager was shot and killed by George Michael Zimmerman. Gerardo Mora/Getty Images hide caption 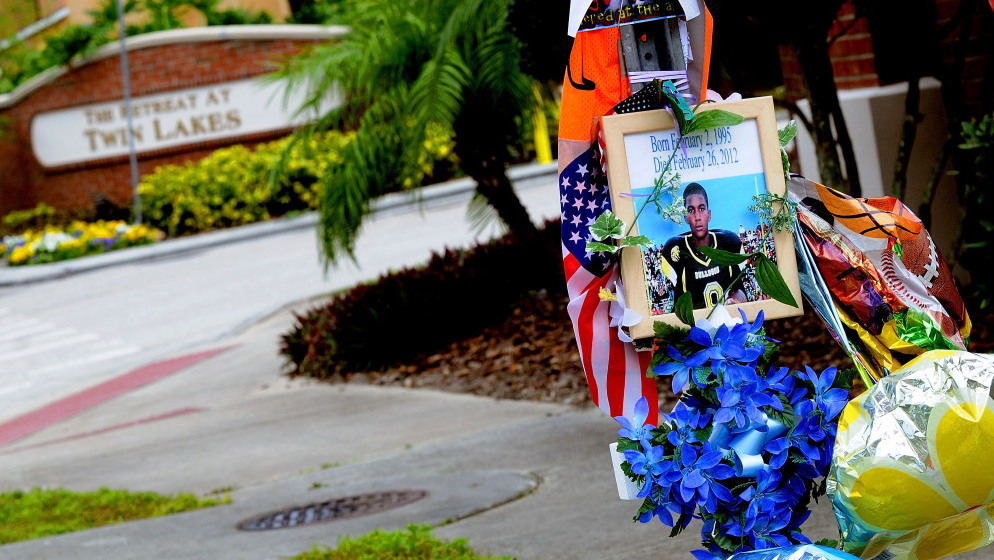 A memorial to Trayvon Martin sits outside The Retreat at Twin Lakes community in Sanford, Fla., where the teenager was shot and killed by George Michael Zimmerman.

Trayvon Martin was "a typical teenager who would end up in a casket, buried in white suit with a powder blue vest," the Miami Herald writes.

George Zimmerman, the 28-year-old man who killed 17-year-old Martin in an incident that has reignited the national debate over race, is hard to categorize, says The Washington Post. He "was once a Catholic altar boy," has "a surname that could have been Jewish," a white father and a Peruvian mother. "There may be no box to check for George Zimmerman, no tidy way to categorize" him.

Those stories are telling us more about the two figures at the center of the tragedy that occurred in Sanford, Fla., on Feb. 26.

According to the Herald:

"Trayvon was 6-foot-3, 140 pounds, a former Optimist League football player with a narrow frame and a voracious appetite. He wanted to fly or fix planes, struggled in chemistry, loved sports video games and went to New York for the first time two summers ago, seeing the Empire State Building, the Statue of Liberty and a Broadway musical, The Addams Family. ...

"[He] had nonviolent behavioral issues in school, and on the day he was killed, he had been suspended for 10 days from Dr. Michael M. Krop Senior High School in North Miami-Dade. 'He was not suspended for something dealing with violence or anything like that. It wasn't a crime he committed, but he was in an unauthorized area [on school property],' [his father] said, declining to offer more details. ...

"When he was a child, Trayvon saved his father's life.

" 'That was my main man. That was my hero. He saved my life, actually pulled me out of a house fire. He was 9 years old at the time. A 9-year-old kid saved his dad's life. And I wasn't there to save his life,' [his father Tracy] Martin said in an MSNBC interview that aired Thursday."

"In Manassas, [Va.] where Zimmerman lived in the 1980s and 1990s with his parents and two siblings, neighbors tended to define the family based on their spiritual profile. 'Very Catholic . . . very religious,' their neighbor Jim Rudzenski recalled Thursday. The children attended All Saints Catholic School on Stonewall Road through the eighth grade before going to Osbourn High School. George became an altar server and evening receptionist at All Saints Catholic Church. The Zimmermans 'were known and respected in the community for their dedication and service,' said Robert Cilinski, pastor of All Saints Catholic Church. ...

"Zimmerman's life was not without difficulties. In 2001 — when he was 17 or 18 — he was the victim of a minor criminal assault, said Manassas police Sgt. Eddie Rivera. The city's computer records do not provide details of the crime.

"In school, Zimmerman hinted at ambitions in the business world. He joined a Future Business Leaders of America club. And in his senior yearbook, he wrote: 'I'm going to Florida to work with my godfather who just bought a $1 million business.' ...

"In Florida, Zimmerman ... [had] hopes of becoming a law enforcement officer. He became the self-appointed protector of the streets around his home, although his neighborhood watch organization was not officially registered."

Martin, who was unarmed, was shot by Zimmerman in what the older man claims was a case of self defense. Martin's family and supporters — and now a growing number of people across the nation — say it was a case of racial profiling and that Zimmerman only assumed Martin was "suspicious" and followed him through the neighborhood because the teenager was black.

As Eyder reported, on Thursday the chief of police in Sanford stepped aside temporarily. Also Thursday, Florida Gov. Rick Scott (R) appointed a new prosecutor to take the case before a grand jury.

On Morning Edition today, NPR's Kathy Lohr reported about the growing protests over authorities' handling of the case and NPR's Greg Allen followed up on the "stand your ground" law in Florida that has made it easier to claim self defense in such cases (also see Eyder's report about that law from earlier this week).