Accessibility links
Trayvon Martin Death: Police Video Shows No Signs Of Zimmerman's Injuries : The Two-Way The video was taken at a police station in the hours after the fatal Feb. 26 confrontation. George Zimmerman had received some medical attention by that time. He claims he shot the teen in self defense.

From 'Morning Edition': A look at Marion Hammer, who championed 'Stand Your Ground'

A police video of George Zimmerman in the hours after he shot and killed Trayvon Martin on Feb. 26 does not show any obvious evidence of the injuries Zimmerman reportedly received during what he says was an altercation that ended with him firing his handgun in self defense.

ABC News obtained the footage and aired it Wednesday evening. As it reports: 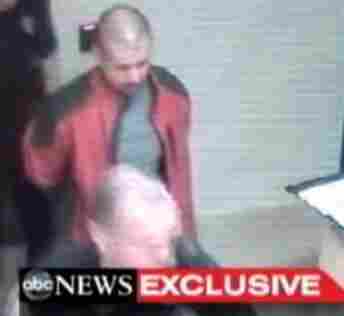 George Zimmerman, in the red jacket, as he was led through a police station in Sanford, Fla., after the Feb. 26 shooting death of Trayvon Martin. ABC News hide caption 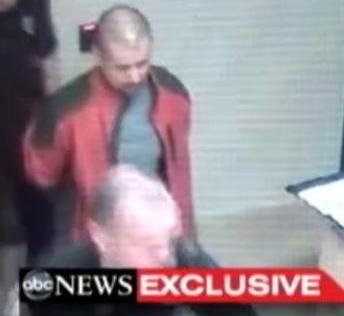 George Zimmerman, in the red jacket, as he was led through a police station in Sanford, Fla., after the Feb. 26 shooting death of Trayvon Martin.

"The initial police report noted that Zimmerman was bleeding from the back of the head and nose, and after medical attention it was decided that he was in good enough condition to travel in a police cruiser to the Sanford, Fla., police station for questioning.

"His lawyer later insisted that Zimmerman's nose had been broken in his scuffle with 17-year-old Martin."

The Orlando Sentinel adds that Zimmerman was " tended at the scene by paramedics but told them he did not need to go to a hospital, police reported."

So it is possible that paramedics cleaned any blood before Zimmerman arrived at the police station.

Martin's death has become a national story because his family and supporters have made the case that the 17-year-old African-American teen was a victim of racial profiling — first by Zimmerman and then by authorities who declined to arrest the shooter. There have been marches and rallies in various cities, and calls from Democratic lawmakers on Capitol Hill for Zimmerman's arrest. There have also been calls for changes to the "stand your ground" laws, in Florida and 16 other states. Those statutes make it easier for citizens, such as Zimmerman, to claim self defense.

From 'Morning Edition': A look at Marion Hammer, who championed 'Stand Your Ground'

In related news, Zimmerman's father — Robert Zimmerman — has told WOFL Fox 35-TV in Orlando about some of what his son has said concerning what happened the evening of Feb. 26. George Zimmerman, 28, had called police to say he saw a "suspicious" young man walking through his neighborhood. Zimmerman, a neighborhood watch volunteer, was told by the dispatcher that he did not need to follow the person.

According to Robert Zimmerman, his son says he then walked to the next street in order to "get an address for the police" that could then be relayed to the officers who would be sent to check out his report.

"It's my understanding," Robert Zimmerman said, that Trayvon Martin then approached the older man and the fatal confrontation began. George Zimmerman has reportedly told police that Martin knocked him to the ground and slammed his head into the sidewalk several times.