Accessibility links
Study: Conservatives' Trust In Science At Record Low : The Two-Way In 1974 conservatives and liberals agreed in their trust of science, but gradually that trust has eroded for conservatives. A scientist says politicization may play a role. 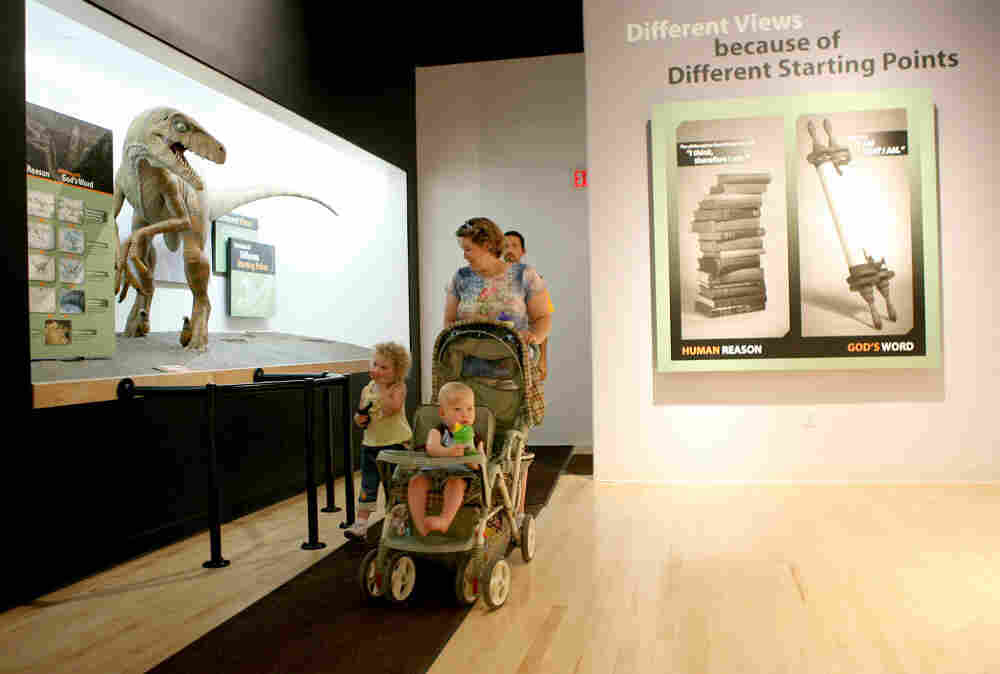 Elizabeth Burrows of LaGrange, Kentucky, walks with her children, as they tour the Creation Museum in Petersburg, Kentucky. The privately funded museum exhibits the Earth's history according to the Bible. Mark Lyons/Getty Images hide caption 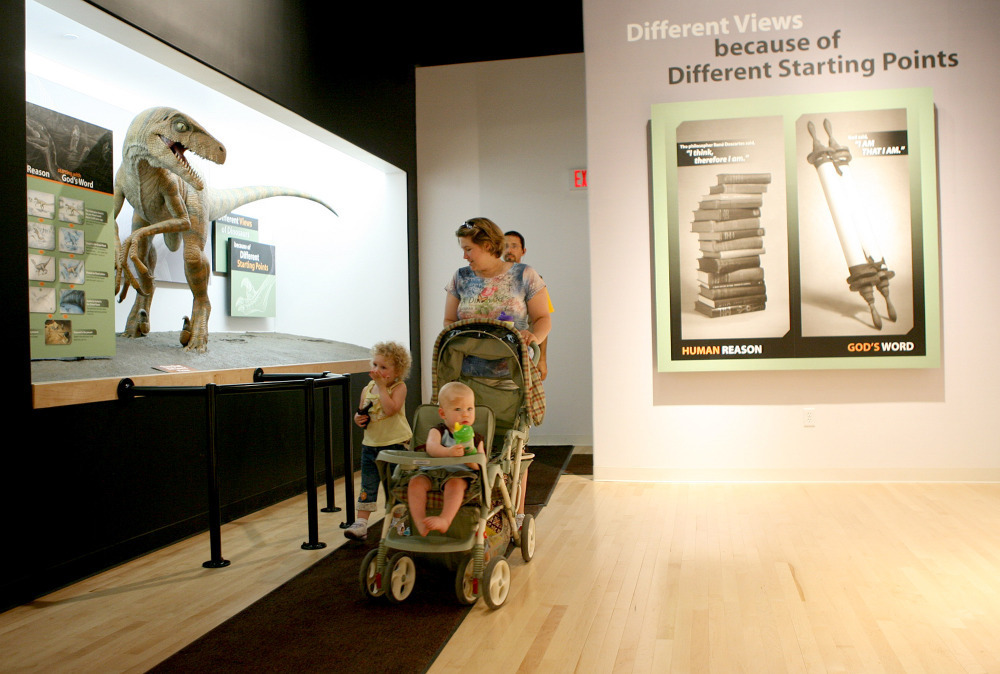 Elizabeth Burrows of LaGrange, Kentucky, walks with her children, as they tour the Creation Museum in Petersburg, Kentucky. The privately funded museum exhibits the Earth's history according to the Bible.

Gordon Gauchat, a sociology professor at the University of North Carolina at Chapel Hill, studied data from the General Social Survey and found that changes in confidence in science are not uniform across all groups.

"Moreover, conservatives clearly experienced group-specific declines in trust in science over the period," Gauchat reports. "These declines appear to be long-term rather than abrupt."

Here's the graph that tracks the change in conservatives, liberals and moderates: 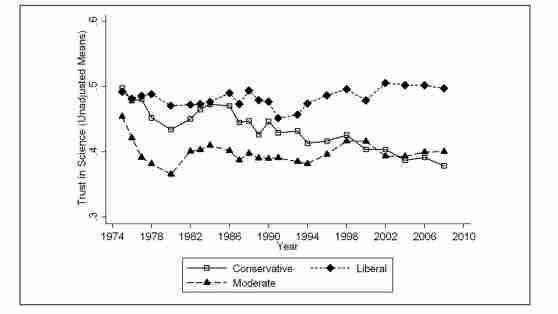 Gauchat's findings are published in the April issue (pdf) of the American Sociological Review.

Of course the big question here is what happened to provoke this split among Americans who pretty much agreed on how much trust they put in science in 1974?

Two of the three hypothesis put forth by Gauchat would have trust in science decline or ascend uniformly. But the third, which is the one Gauchat puts his money on, is the "politicization thesis."

Here's how Gauchat explained that thesis to US News:

"Gauchat says conservatives' rebellion against the 'elite' and the shifting role of science in society is to blame for the decline. He argues that the conservative minority has rebelled against science in the same way it has against media and higher education.

"'It kind of began with the loss of Barry Goldwater and the construction of Fox News and all these [conservative] think tanks. The perception among conservatives is that they're at a disadvantage, a minority,' he says. 'It's not surprising that the conservative subculture would challenge what's viewed as the dominant knowledge production groups in society — science and the media.'

Gauchat also argues that science changed over time to become the means of answering questions that religion used to be charged with.

We're talking to Gauchat later on today. We'll update this post with a little more detail on his thoughts and findings.

Speaking to Gauchat, he said that what surprised him most about his study is that he ran statistical analysis on a host of different groups of people. He only saw significant change in conservatives and people who frequently attend church.

Gauchat said that even conservatives with bachelor's degrees expressed distrust in science.

Gauchat said his data points at that second reason as the main source of distrust of science.

"What I know in the data I have is that conservative's perception of science as connected to government is what bothers them about science," said Gauchat. "So they don't necessarily see science as harmful or evil or something like that but they see it as something that is maybe too abstract or theoretical to inform how we live our life or our public policy."

Gauchat points at GOP presidential candidate Rick Santorum, who during stump speeches has railed against climate science saying it informs a policy that tries to control American's access to energy.

Another bit of surprising news from the study, said Gauchat, is that trust in science for moderates has remained the same.