Accessibility links
Trayvon Martin Death: Prosecutor Plans Announcement By Late Friday : The Two-Way State Attorney Angela Corey is deciding whether or not to arrest and prosecute George Zimmerman, who shot and killed Martin in Sanford, Fla. The case as ignited a national debate about race relations and racial profiling.

Shortly after we learned Tuesday that George Zimmerman's lawyers said they had lost contact with their client and were withdrawing from the case, there was an announcement from special prosecutor Angela Corey's office that she would be making an announcement about the case within 72 hours. 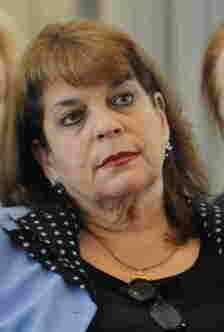 That would seem to mean we'd be hearing from her by late Friday, perhaps on whether she will or will not seek to prosecute Zimmerman. Corey, a Republican, is a Florida state attorney — an elected position.

Zimmerman, 28, is the neighborhood watch volunteer who on Feb. 26 in Sanford, Fla., shot and killed 17-year-old Trayvon Martin. The incident has ignited a national debate about racial profiling and the actions of local authorities, who so far have declined to arrest Zimmerman. He has claimed he acted in self defense. Martin's family and supporters say Zimmerman followed Martin because the teen was black and have raised doubts about his self-defense claim.

On CNN this morning, Zimmerman's former attorneys — Craig Sooner and Hal Uhrig — explained again how they have withdrawn because they haven't been able to reach their client since Sunday. But, they also repeated that they believe the evidence will support Zimmerman's self-defense claim.