Accessibility links
'Texts From Hillary' Gets Secretary Clinton's Endorsement : The Two-Way Some say that by embracing the suddenly popular Tumblr blog she's reinforcing a newly "cool" image. And, perhaps, signaling that she does indeed still have some political aspirations. 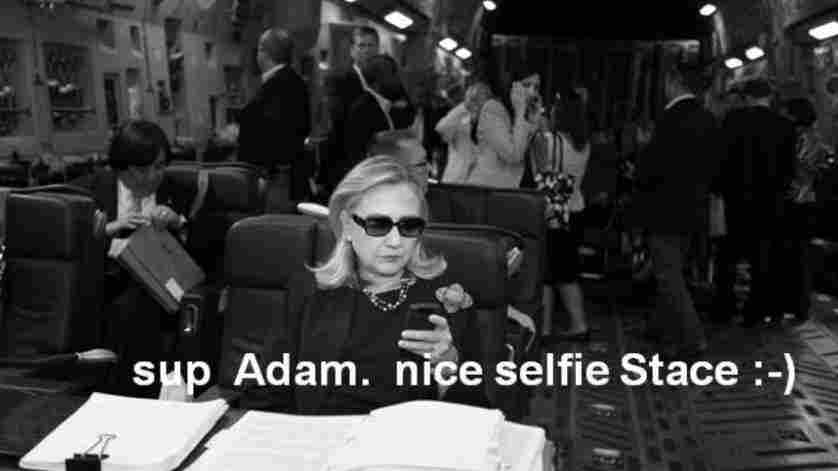 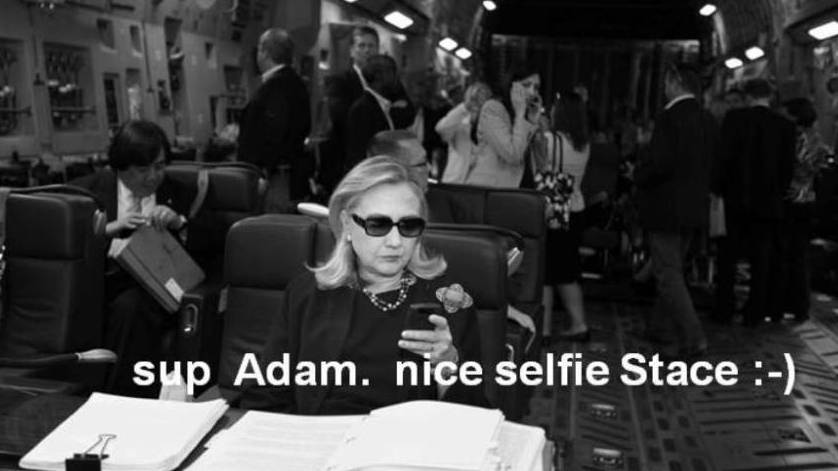 Part of the contribution Secretary of State Hillary Rodham Clinton (or someone on her staff, of course) made to Texts from Hillary.

Update at 4:45 p.m. ET. And With That, The Fun Is Over; Texts From Hillary Decides To Call It A Day:

Saying that "as far as memes go — it has gone as far as it can go," the Texts from Hillary guys have decided to stop adding to the blog.

But we still suggest checking out our original post:

Seen Texts from Hillary yet?

The Secretary of State has, and she apparently likes it.

As Politico says, the suddenly popular Tumblr blog "has just added one VIP to its fan base. ... Clinton herself."

She met the blog's creators — Adam Smith and Stacy Lambe — on Tuesday and gave them her thumb's up. Clinton, almost surely with help from her staff, even contributed to the blog.

We can't do the blog justice by just describing it. You really have to check it out to figure it out. But, basically, it's a series of visual jokes that pair a photo of a sunglasses-wearing Clinton — looking down at the mobile device in her hand — with photos of other famous folks. And as the captions show, they're supposedly trading texts.

An example from Monday:

-- In one photo, Facebook CEO Mark Zuckerberg "texts" this: "Guess what I just bought!."

Another one we liked:

-- Condoleezza Rice is seen with President George W. Bush, supposedly telling him that "I sent her a text saying I think [I] left my favorite sunglasses in the desk."

And there's this one:

Some are saying this all has some political relevance. According to The New York Times' Maureen Dowd, Clinton's embrace of Texts from Hillary has "cemented her newly cool image and set off fresh chatter about her future. ... Her savvy public image gambit on Tuesday [meeting with Smith and Lambe] sent a signal she may not be leaving the stage forever."

Or, it could just be a fun meme.