Accessibility links
Americans Do Not Walk The Walk, And That's A Growing Problem : The Two-Way "Americans now walk the least of any industrialized nation in the world," says writer Tom Vanderbilt. A reliance on cars, combined with a lack of sidewalks, means that what started as a push for convenience has become a difficult problem. 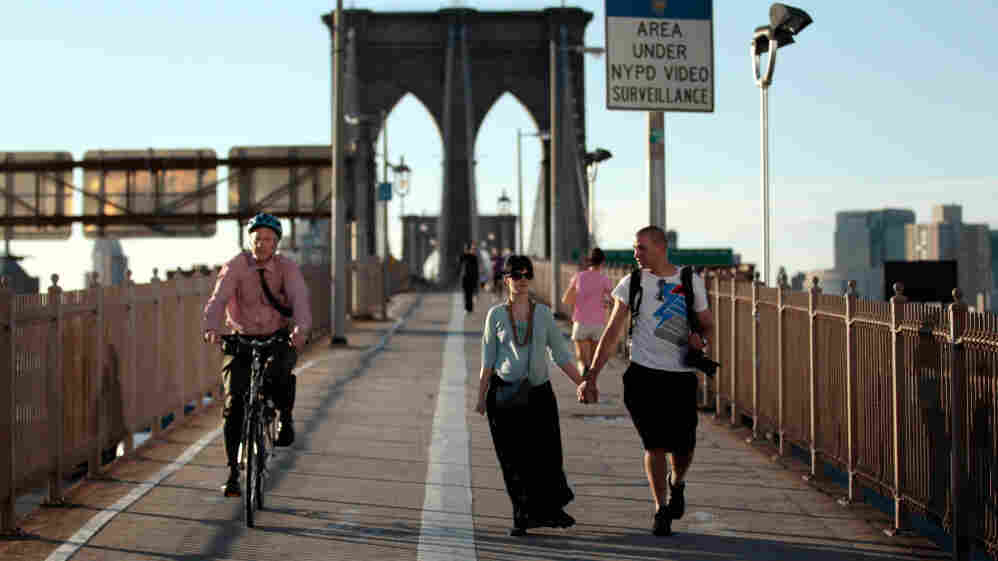 Americans walk less than the citizens of any other industrialized nation, says Tom Vanderbilt. In this file photo from last summer, pedestrians and a cyclist cross the Brooklyn Bridge in New York City. Chip Somodevilla/Getty Images hide caption

"Americans now walk the least of any industrialized nation in the world," says writer Tom Vanderbilt. To find out why that is, Vanderbilt has been exploring how towns are built, how Americans view walking — and what might be done to get them moving around on their own two feet.

Talking with Morning Edition co-host Steve Inskeep about what is wrong with Americans' relationship with walking, Vanderbilt says, "The main thing is, we're just not doing enough of it."

"We've engineered walking out of our existence and everyday life," Vanderbilt says. "I even tried to examine the word 'pedestrian,' and it's always had sort of this negative connotation — that it was always better to be on a horse or something, if you could manage it."

In a series of stories for Slate about "The Crisis in American Walking," Vanderbilt writes about pedestrian life in America, from "sidewalk science" to possible ways to make the U.S. less car-centric. And he finds that what started as a push for convenience has become a difficult problem, as many parts of the country are now designed specifically for cars, not pedestrians.

And while Americans have cut down on walking, they've been putting on some pounds. A recent study found that about 35 percent of adult Americans are obese, as NPR's Shots blog reported in January. That equals "more than 78 million adults and more than 12 million children."

As one example of how people can take a technological advance and turn it into a reason to stop exercising, Vanderbilt points to the moving sidewalk.

"Go to an airport, and look at people on the moving walkway," he says. "I mean, the engineers who built that walkway — it's meant to speed you up, by walking on it. You're not meant to just hop on it and go on a slow, sort of moving ride."

Americans' reluctance to be pedestrians has not gone unnoticed — and there are efforts under way to get us walking more. The group America Walks, for instance, promotes walking in our daily lives with its "safe routes" program and other initiatives. And the Walk Score website rates neighborhoods based on how easy it is to walk around in them.

Those ideas also contribute to the rising trend of "mixed-use" real estate developments, many of which approximate the feel of an old village square by building cobblestones, sidewalks and lampposts into outdoor malls or apartment buildings.

Vanderbilt says of the movement, "I think the impulse is correct, and it does speak to this hunger that I think people do have, to walk."

But, he adds, while such developments offer a way to treat the symptoms of inactivity, they don't address the core problem — of too many people living too far away from the things they need.

"It's been argued by certain planners that people will drive to where they want to walk," he says. "But, can we walk to where we want to go? Does it always have to be a matter of jumping in a car?"

"Walking is really as natural as breathing," Vanderbilt says. "We're all born pedestrians."

Talking with Steve, Vanderbilt cites a thought on walking from philosopher Soren Kierkegaard, who said, "I've walked myself into my best thoughts."

As he writes in the final installment of his series, "There is not a single dollar in the U.S. federal transportation budget dedicated strictly to walking."

Later in the same paragraph, Vanderbilt writes: "As a Federal Highway Administration study noted, 'In 2009, about 2.0 percent of federal-aid surface transportation funds were used for pedestrian and bicycle programs and projects. However, those two modes are estimated to account for almost 12 percent of all trips and represent more than 13 percent of all traffic fatalities.'"