A photograph published by ABC News this morning shows what the network says is the head of George Zimmerman covered in blood. ABC News says the picture was taken minutes after Zimmerman shot Trayvon Martin to death.

The 28-year-old neighborhood watch volunteer is charged with second-degree murder in the shooting, but he has maintained that he shot Martin, who was unarmed and on his way back from buying candy and tea, in self defense.

ABC News reports that this is the first piece of publicly available evidence that supports Zimmerman's claim that "Martin had bashed his head against the concrete as Zimmerman fought for his life." 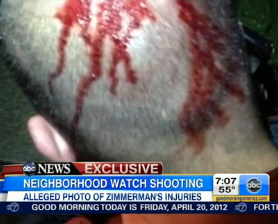 "Prosecutors have seen all the evidence and still believe Zimmerman murdered Trayvon," Martin's family told ABC News in a statement.

As Scott reported earlier, a judge set a $150,000 bail this morning, saying if Zimmerman was released from jail to await trial he "would be electronically monitored, could have no contact with Trayvon Martin's family and would be prohibited from possessing firearms or using alcohol."