Accessibility links
Canceling Out The 'Background Noise' On Egypt-Israel Relations : The Two-Way By ending a historic gas contract with Israel, is Egypt laying the groundwork for a fundamental shift between the two countries? 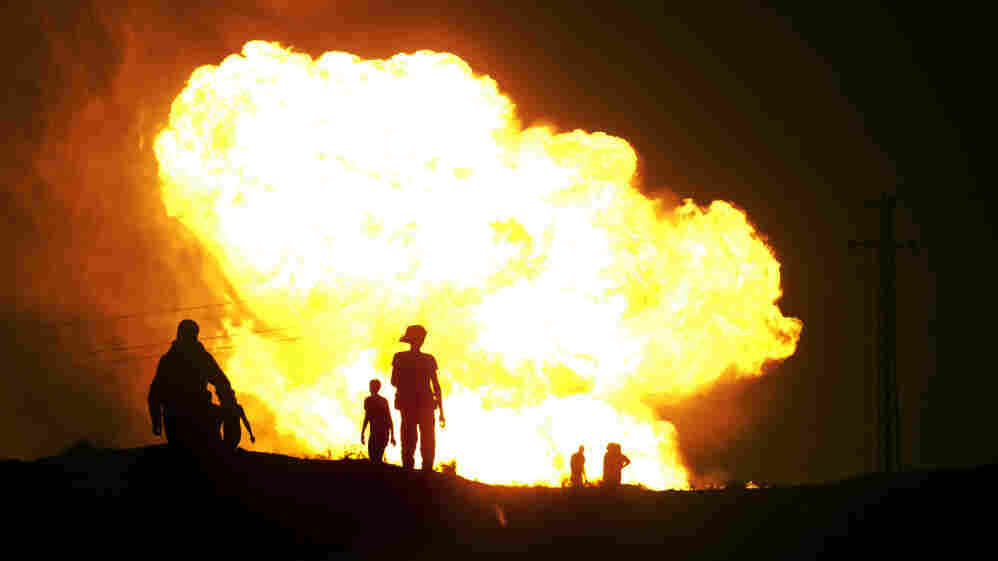 Bedouins watch flames rise in July 2011 after masked gunmen blew up a terminal of the Egyptian natural gas pipeline to Israel and Jordan. It was one of many attacks on the pipeline since the popular uprising that ousted longtime Egyptian leader Hosni Mubarak last year. AP hide caption 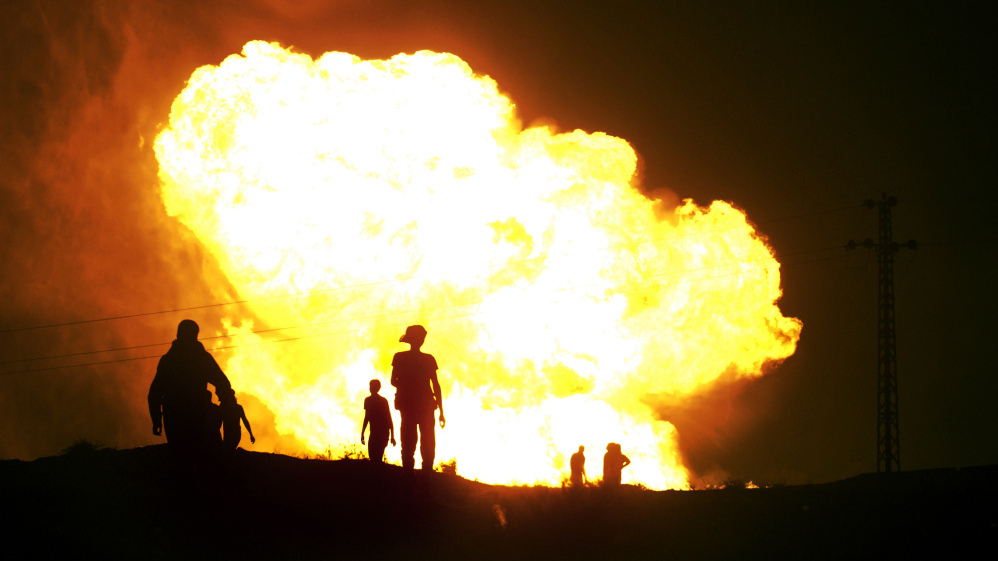 Bedouins watch flames rise in July 2011 after masked gunmen blew up a terminal of the Egyptian natural gas pipeline to Israel and Jordan. It was one of many attacks on the pipeline since the popular uprising that ousted longtime Egyptian leader Hosni Mubarak last year.

By ending a historic gas contract with Israel, is Egypt laying the groundwork for a fundamental shift in relations? Not quite, says Rob Malley of the International Crisis Group.

"What we're seeing right now is a lot of noise, but no real change, partly because — if not essentially because — both the Israelis and the Egyptian security establishment believe that the relationship is critical for both of them."

Israel and Egypt signed the historic Camp David peace treaty in 1979, and The Associated Press reports:

"While relations have never been particularly warm, the quiet border has been critical for the security of the two neighbors. Egyptian energy exports to Israel and other business ties have helped keep the peace."

NPR's Sheera Frenkel reports for Weekend Edition that the gas deal was signed in 2005 and intended to last for at least 15 years. Reuters calls it "the most significant economic agreement to follow" the 1979 treaty and Jordan's treaty with Israel in 1994.

Israel has been getting about 40 percent of its gas from Egypt, according to the AP, yet Egypt said last Sunday that it was ending the gas contract. Government spokespersons in both Israel and Egypt are trying to downplay the issue as a dispute between two companies rather than a threat to the peace treaty, Frenkel reports.

The economics behind the deal, though, are "highly controversial in Egypt," CNN reports, "in light of allegations that Egyptian government officials enriched themselves on the deal and that Israel has paid below-market prices for the gas."

Recent disruptions in Egypt's Sinai Peninsula have also put the deal under a magnifying glass, The Los Angeles Times notes:

"The gas deal has been under scrutiny for months and shipments were interrupted more than a dozen times because of sabotage and explosions along the pipeline through the Sinai Peninsula."

Frenkel says many in Israel are wondering if peace with Egypt can be maintained. She spoke with Zvi Mazel, Israel's former ambassador to Egypt. After time as a diplomat in Cairo following the Camp David treaty, Mazel returned as ambassador in 1996 and served until 2001. He worked on the negotiations that led to the gas deal, Frenkel says. He tells Frenkel:

"I have here the agreement, signed between the government of Egypt and Israel that backed the guarantee to Israel that gas will continue to stream to flow to Israel at any cost."

But the gas is not the biggest issue, he tells Frenkel, the peace deal is:

"It seems like a bad omen for the future. It's after all the problems that we had between us and Egypt, after the ouster of [President Hosni] Mubarak, now we see the first cancellation of a treaty."

Daniel Byman, a professor at Georgetown University, tells Foreign Policy he predicts worsening political relations — though not fighting — between the countries. In an email, Byman says, "I think it signals that the cold peace will get even colder."

Malley of the International Crisis Group is unmoved by remarks like those of the Israeli foreign minister Avigdor Lieberman, who said Egypt has become a greater threat than Iran, as Reuters and others have reported. This is not a step toward ending the Camp David peace treaty, Malley says.

"For now [the treaty is] still safe, and I think we have to distinguish between some of the background noise and what are the real interests of the parties involved. You're gonna hear a lot — you heard foreign minister Lieberman, you're gonna hear Egyptians saying things. But deep down, neither Israel nor the Egyptian military nor even the Egyptian Muslim Brotherhood has an interest in undermining relations with Israel, [or] relations with the United States, because all prefer stability."

That said, even more changes are soon to come for Egypt, Malley says. The first presidential elections since Mubarak's ouster are next month.